The world champion ended the session with a 0.204s advantage over his title rival, but Verstappen’s final laps were disrupted by traffic and he had a fractionally faster personal best deleted for running too wide at the final corner on his last go.

Most of the pack remained in the pits when the one-hour session got underway, with only the Haas cars taking to the track in the early stages – each running the hard tyres.

Mick Schumacher established the first place benchmark at 1m11.308s after five minutes had passed, which he whittled down to 1m11.238s as he and team-mate Nikita Mazepin lapped the otherwise empty track before they were replaced by the Alpine duo at the 10-minute mark.

Esteban Ocon and Fernando Alonso immediately appeared on the mediums, with the former taking the top spot on his first flying lap – a 1m07.353s – before Alonso swept through to post a 1m07.031s.

On the other side of Kimi Raikkonen briefly taking first place with a 1m06.778s on the softs that was deleted for the Alfa Romeo driver running too wide out of the penultimate corner, Ocon set a 1m06.839s that stood as the new benchmark until Alonso beat it a few minutes later with a 1m06.686s.

George Russell put his Williams into first place with a 1m06.454s – the last then best time set on the medium tyres.

Approaching the 25-minute mark, Mercedes sent Bottas out for the first time – immediately running the softs, which he used to go fastest on a 1m06.212s.

Bottas took a cooldown tour and then went again on his first set of softs, improving the first place time to a 1m06.063s.

Hamilton and Verstappen had been the last drivers to take to the track and after their initial runs on the softs it was the Red Bull driver that held the edge, as he put in a 1m05.571s just before the halfway point. 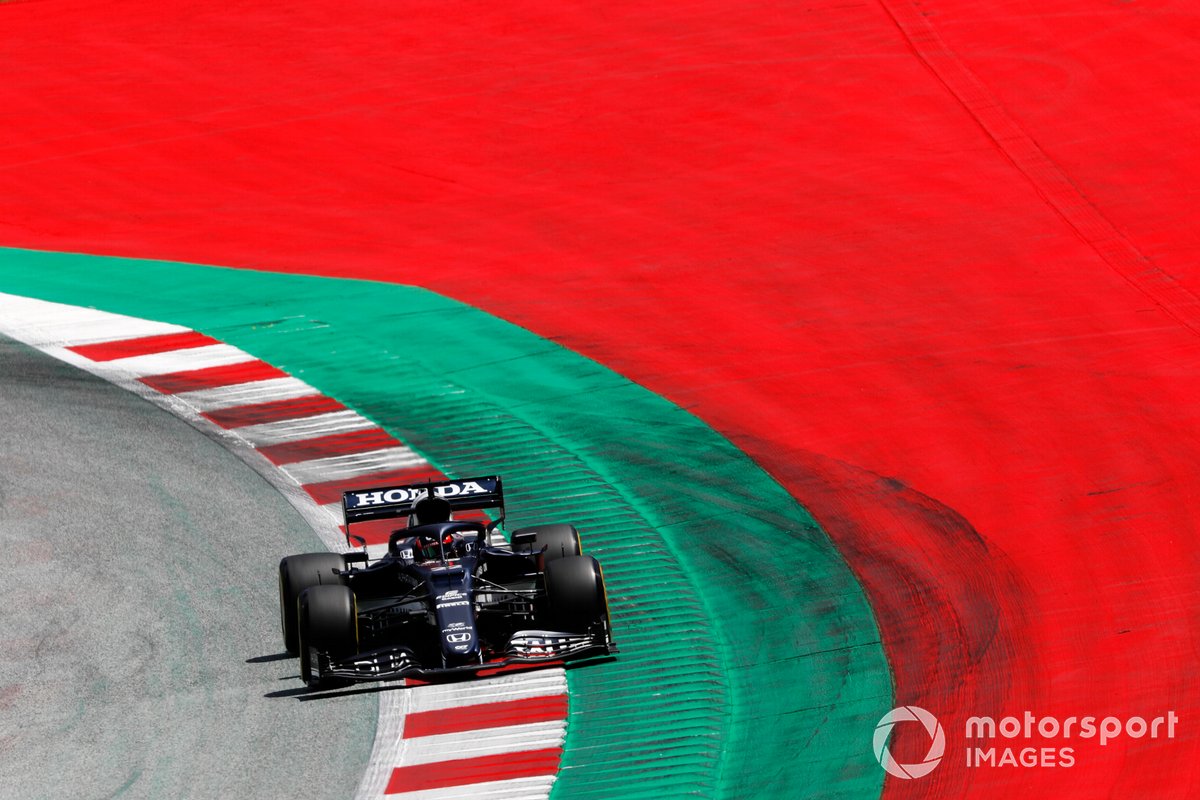 Verstappen then set a 1m04.971s as his opening run continued, with Hamilton generally lapping about 0.3s slower – the Briton being told the gap at this stage was down to the Red Bull gaining on the straights.

After a final lull in action with 20 minutes to go as all cars returned to the pits, Bottas then beat Verstappen’s time on a 1m04.832s, before Hamilton set the session’s best time at a 1m04.369s a few moments later.

Verstappen did not reappear until there was just over five minutes of FP1 left to run and, although he went for one final qualifying simulation run, he was compromised by traffic early in what would be his penultimate flying lap and then came upon Hamilton touring slowly and offline at Turn 7 – the fast left at the end of the second sector.

Verstappen did set the session’s quickest time in the final sector on that lap, but wound up just over 0.2s adrift – and in a frustrated message to his Red Bull team seemed to suggest Hamilton had held him up.

After a tour through the pits Verstappen went for one last effort, but was again down in sector one compared to Hamilton and then caught traffic approaching the final corner and slid wide on the exit, which took him beyond track limits and his time – which was 0.201s behind Hamilton – was duly deleted.

Sergio Perez took fourth behind Bottas, with the Mexican driver followed by AlphaTauri pair Yuki Tsunoda and Pierre Gasly in fifth and sixth.

Charles Leclerc led Fernando Alonso and Lance Stroll in seventh, eighth and ninth, with Sebastian Vettel – who ran heavily over the big yellow kerb in the runoff exiting Turn 1 in the final stages – rounding out the top 10.

Lando Norris ended up P19 in the final standings after losing a late lap that would have put him between the AlphaTauri drivers for running too wide at the final corner.

Mazepin brought up the rear of the field, the Russian driver also spinning as he lost the rear of his car midway through Turn 1 just before the halfway point.