Verstappen’s team-mate, Sergio Perez, missed much of the one-hour session after crashing at the Peraltada corner in the early stages and breaking his rear wing – just as Ferrari’s Charles Leclerc had done likewise.

The early running at the Autodromo Hermanos Rodriguez featured considerable levels of dust as the cars swept the track surface, with drivers pointing out the reduced visibility over their team radios.

The teams were rather split on their tyre usage during the early stages – with the Mercedes cars using the soft compound and Red Bull sending its drivers out in the hards – while other drivers ran the mediums.

Kimi Raikkonen had led the field out of the pits and he set the first place benchmark at 1m30.060s on the hards, which was quickly dropped considerably.

Mick Schumacher, Antonio Giovinazzi and Lando Norris all shuffled Raikkonen down the order as they enjoyed brief spells at the top spot on the medium, hard and soft tyres respectively, before Bottas posted a 1m21.327s at the end of the opening five minutes.

Perez then put Red Bull on top with a 1m21.301s on the much harder rubber, before Bottas replied shortly afterwards with a 1m20.459s.

At 10-minute mark, Leclerc and Perez both had crashes at the penultimate corner exiting the stadium section, with the session suspended by a virtual safety car activation to allow the debris from their separate incidents to be cleared.

Leclerc lost the rear of his SF21 when he touched the outside kerb at the start of the Peraltada corner and it swung around to the right, which meant he slid off backwards and low-speed and hit the barriers, breaking his rear wing endplates.

Perez had a higher speed off after he too turned in from on the kerbs, but as he caught his oversteer snap his RB16B snapped and second time, left, and he spun around rapidly, ripping his rear wing half off in the ensuing accident.

Both drivers recovered to the pits where their cars spent nearly half the session undergoing repairs. 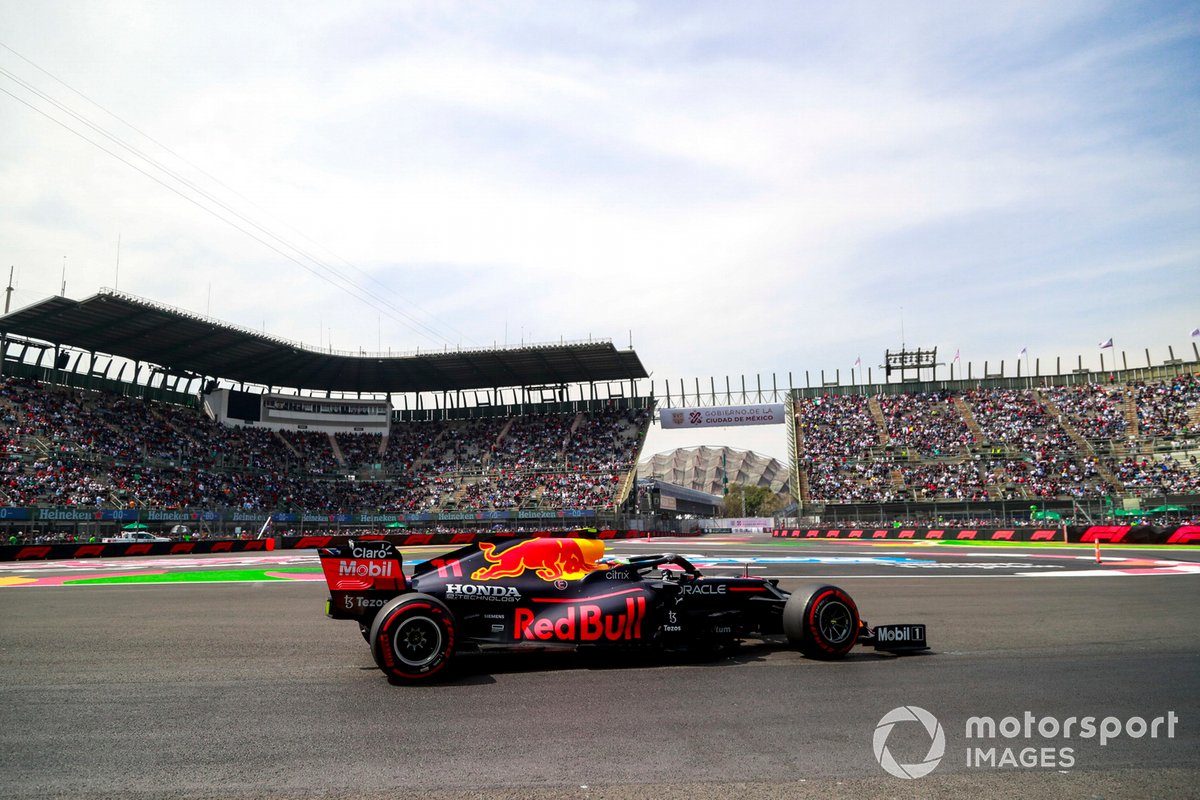 On-track, just after Pierre Gasly took the top spot on the softs with a 1m20.316s at the 15-minute mark, Hamilton had a right-front lock-up approaching the first corner and he went deep onto the runoff and the grass behind Turn 2.

He cut across the grass but did not go to the left of the bollard on the apex of Turn 2, per race director Michael Masi’s event note requirements, and so his actions will be investigated now FP1 has finished.

After his off, Hamilton swapped then best times at the head of the order with Verstappen – the Dutchman bettering Gasly’s time with a 1m20.214s while still using the hards with 20 minutes gone.

Hamilton, still on the softs, then posted a 1m20.085s, to which Verstappen responded with a 1m19.826s five minutes later and then the world champion stole ahead again on a 1m19.781s.

After a brief lull in action around the halfway point, all the cars switched to the softs (some went back to the hards in the concluding stages of FP1) for a series of qualifying simulation runs.

Carlos Sainz Jr went quickest for Ferrari with a 1m19.470s before Bottas used his new softs to go back to first place on a 1m18.834s, with Verstappen moving back ahead just before the 40-minute mark with a 1m18.464s.

After Perez and Leclerc returned to the track following their repairs, Bottas went for another run and posted what would be the session’s fastest time – a 1m18.341s.

With just over 10 minutes remaining, Hamilton slotted into second, 0.076s slower than Bottas, with Verstappen shuffled down to third, 0.123s adrift.

Perez worked his way up to fourth by the end of the session, the local hero still visibly struggling with oversteer in the closing minutes, with Gasly fifth ahead of Sainz and Fernando Alonso.

Leclerc ended up eighth ahead of Esteban Ocon and Sebastian Vettel, who rounded out the top 10.

Raikkonen finished 12th and will also be investigated by the stewards for failing to go around the Turn 2 bollard during an off-track excursion.

Tsunoda, Stroll set for back of the grid start at Mexican GP after engine changes