After he’d topped FP3 by over 0.7s, Verstappen led the way again after the first runs in Q3, with a 0.386s advantage over Hamilton.

The world champion found enough time on his final run to out-do Verstappen’s first flying effort in the final segment of qualifying, but the Dutchman had already put the P1 benchmark out of reach as he led the top four runners to the line, as they ran at the rear of the pack on their final laps.

Although Hamilton ultimately came away with the best time in the first sector, purple sectors for Verstappen in the second two thirds of the lap - after he’d put in his own personal best in the opening sector - resulted in a 1m29.990s.

Hamilton ended up 0.258s adrift, but beat his Mercedes team-mate Bottas for the first time in the weekend, as the Finn finished 0.386s down on Verstappen after topping Q2.

Perez was followed by Carlos Sainz Jr, who led the way in qualifying for Ferrari for the second time in 2021, with Pierre Gasly (AlphaTauri) and Sainz's team-mate Charles Leclerc taking sixth and seventh – Gasly needing to deliver on his final Q3 run after losing his first time for running too wide through Turn 6.

McLaren team-mates Lando Norris and Daniel Ricciardo were separated by Fernando Alonso’s ninth-placed Alpine, as the trio rounded out the top 10.

All of the top 10 runners will start the race on the medium tyres, after traversing the middle segment on the harder rubber, which is expected to perform much better than the softs in race conditions on Sunday. 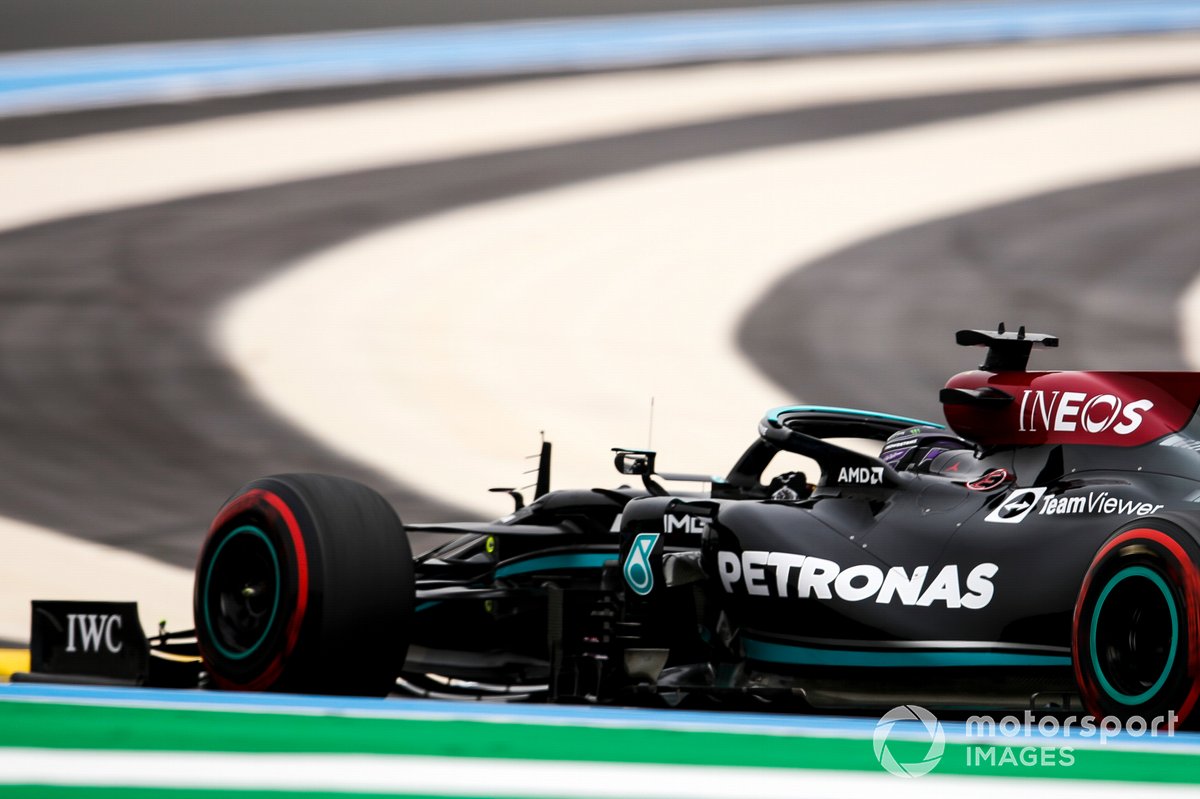 In Q2, Esteban Ocon set a personal best on his final lap in the middle segment but was knocked out by 0.121s behind Ricciardo – who had switched to run the softs on his final Q2 lap, which he abandoned when it was clear he was through to ensure he will start the race on the preferred medium starting strategy.

Sebastian Vettel’s final run in Q2 was nearly a slower than his personal best as he ended up P12, ahead of Alfa Romeo’s Antonio Giovinazzi and Williams driver George Russell.

The latter pair ran contra tyre strategies for the Q2 runs, with Giovinazzi copying the rest in taking the mediums at the start of the segment, while Russell went for the softs.

When they swapped compounds for their final laps, Russell nipped ahead into P13 as he ran the mediums, but the soft-shod Giovinazzi got back ahead at the chequered flag fell to end the middle segment, and both drivers will be free to pick any starting compound for the race.

Mick Schumacher made it through to Q2 for the first time in his F1 career, but only after he had ended Q1 25 seconds early when he crashed at Turn 6, the long right-hander that feeds into the Turn 7 left kink and the Mistral Straight early in the lap.

The rear of the Haas came around midway through the corner as he went to complete his final Q1 run and he went off backwards at high-speed, facing the wrong way across the runoff before hitting the barriers backwards on the outside. This damaged his car's rear end and the left-front was also knocked off as the car snapped back around in the impact.

That stopped any late improvements, and kept Schumacher in a Q2 berth he could not take up, finishing P15 in qualifying’s provisional classification, with Nicholas Latifi leading the eliminated drivers in P16.

The Williams was driver knocked out by just 0.002s behind Russell, who had been set to complete a much faster late Q1 time before having to abandon the lap when the red flags came out.

Kimi Raikkonen and Nikita Mazepin were trapped in 17th and 18th, while Lance Stroll ended up 19th with no competitive time set. 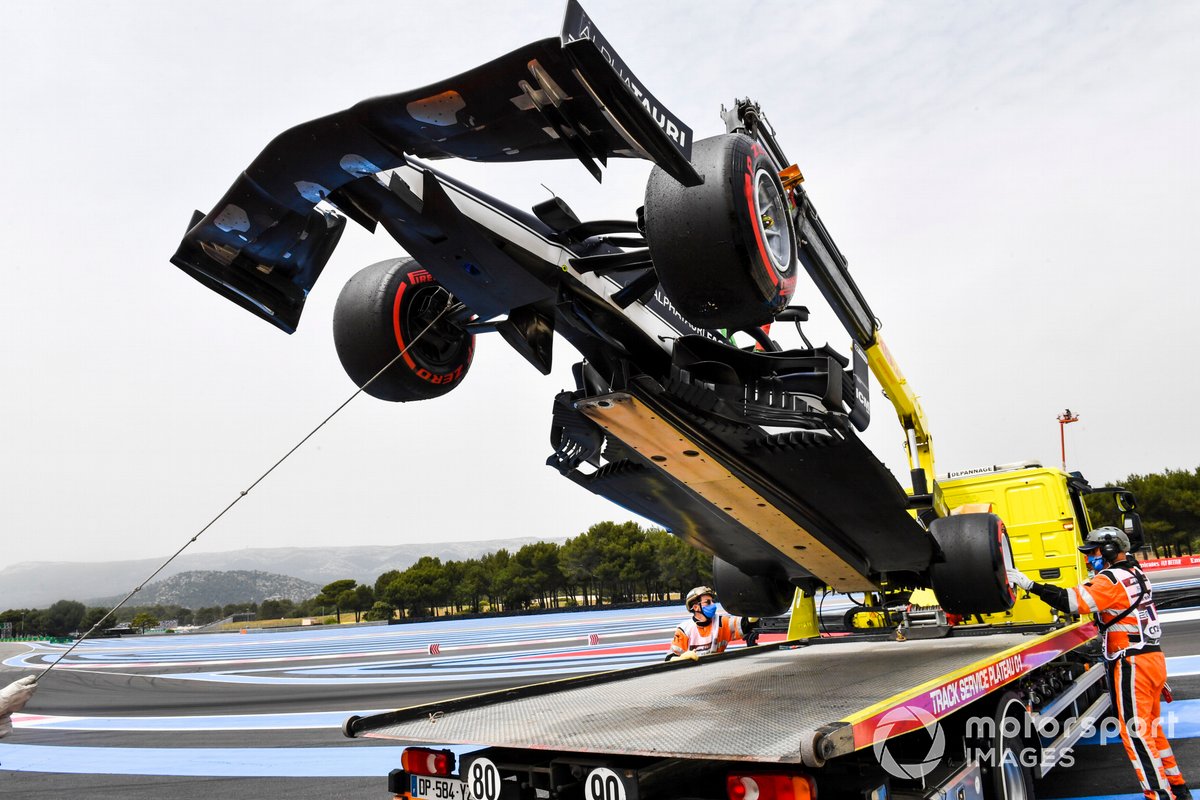 The damaged car of Yuki Tsunoda, AlphaTauri AT02, is loaded onto a truck

Stroll had lost a time that would have got him through Q1 in the top 10 for running too wide through Turn 6 earlier in the opening segment and getting his lap deleted.

He had enough time to complete two runs before the scheduled end to Q1, but after abandoning the first lap and setting up for one final run, he was caught out by the late red flag and unable to set a time under two-minutes as the session was not restarted.

The opening segment had already been disrupted by a red flag after just three minutes, when Yuki Tsunoda spun off backwards into the tyre barrier behind Turn 2.

The AlphaTauri driver had clipped the kerbs on the inside of Turn 1 as he started his first flying lap, which unsettled his car and sent its rear quickly swinging around as he went off the track backwards before reaching the second corner.

The AlphaTauri’s rear suspension and wing were already oscillating wildly as the car went backwards off the track, before being damaged against the barriers, from which Tsunoda was unable to get engage a gear and drive away.

He eventually climbed out of the board and will start last. Q1 was suspended for 10 minutes, after which the first times of qualifying were finally set.