Formula 1 drivers have welcomed the FIA’s plan to delete any lap times achieved by cars that pass through a double waved yellow zone in practice and in qualifying.

As previously reported the idea of deleting times emerged in Turkey after Fernando Alonso controversially escaped sanction following a post-qualifying investigation of a yellow flag offence.

After informal discussions between teams and race director Michael Masi on the morning of the race in Istanbul, the subject was debated further in a sporting advisory group meeting last week, when all teams agreed that it would be a good solution.

Masi has now formally confirmed that the system, similar to that for track limits offences, will be used from this weekend’s US GP.

His race director’s notes for the Austin weekend read: “Any driver passing through a double waved yellow marshalling sector must reduce speed significantly and be prepared to change direction or stop.

“In order for the stewards to be satisfied that any such driver has complied with these requirements it must be clear that he has not attempted to set a meaningful lap time. For practical purposes any driver in a double yellow sector will have that lap time deleted."

A section reading “this means the driver should abandon the lap (this does not necessarily mean he has to pit as the track could well be clear the following lap)” has been removed.

Drivers agree that the new initiative is a positive one.

“Now it's clear for everyone if it wasn't already before, which I think it was anyway,” said Charles Leclerc when asked by Autosport about the rule tweak.

“But like this, it takes off the doubt. As soon as you've got a double yellow, you can just slow down as much as you can, and just prepare your next lap, because the lap will be deleted anyway.” 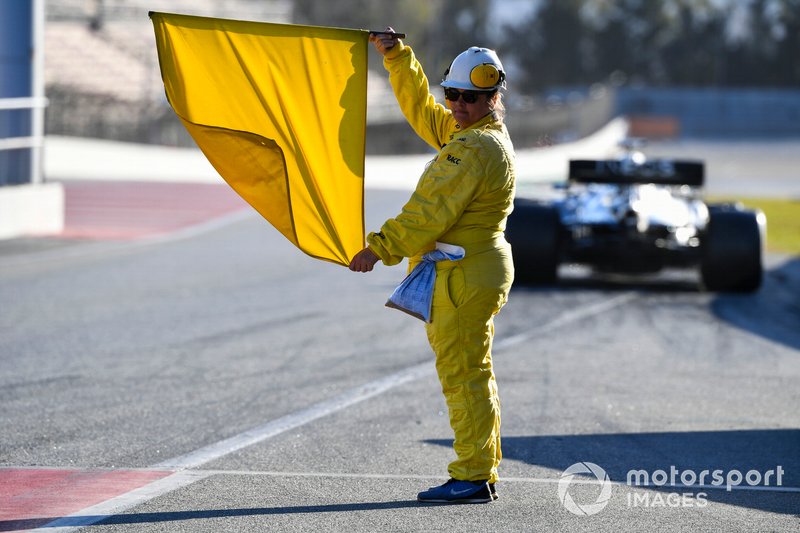 A marshal holds a yellow flag

Nicholas Latifi stressed that the change addressed what was previously a grey area.

“I think it makes it black and white for everyone,” the Williams driver told Autosport. “In qualifying the rule is that there's a double yellow, you're pretty much having to abort your lap. If it's a drying track or mixed conditions, it can still catch a driver out.

“A single yellow is obviously different, and it's kind of a bit more if the driver tries to just lift enough to show that he's lifted.

“But the double yellow, most of the time there is immediate danger, you need to be prepared to stop. So the fact that they just take it away, I mean, it just decides it for us. That's how it's going to be for everybody.

“The kind of grey area is when it is mixed conditions because if you go through one lap and it's dry, and then the next lap a little bit mixed it, but there's a double yellow flag. And even if you push through flat out, you will be slower because of that. I think that black and white for a rule like this is probably what's needed.”

“You will lose completely the opportunity to make a lap time,” said Yuki Tsunoda. “I think most of the situation will be good, it's clear that if it's double yellow your time is going to be deleted anyway, so everyone can slow down automatically, which is good for safety. So for me it is a good idea.”