In his first on-track outing as a seven-time F1 world champion following his title-clinching victory in Turkey two weeks ago, Hamilton was able to lead Mercedes to a 1-2 finish on Friday afternoon at the Bahrain International Circuit.

After initially heading the timesheets on a set of test tyres that Pirelli gave to all teams to help prepare for 2021, Hamilton was able to better his time after switching to the medium compound midway through the session.

Hamilton ultimately set a fastest lap of 1m29.033s on the mediums to beat Mercedes team-mate Valtteri Bottas by four-tenths of a second, with the Finn also completing his best lap on mediums.

Turkey podium finisher Sergio Perez took third place for Racing Point, lapping nine-tenths of a second slower than Hamilton at the front on soft tyres. The Mexican was able to narrowly beat McLaren's Carlos Sainz Jr and Pierre Gasly of AlphaTauri who completed the top five.

Max Verstappen finished sixth for Red Bull after struggling to match the pace of the Mercedes cars at the front, finishing 1.2 seconds off Hamilton's benchmark. Verstappen had a spin exiting the final corner while accelerating nearing the one-hour mark, causing him to flatspot the tyres.

Alexander Albon lapped just eight-thousandths of a second slower than team-mate Verstappen, leaving him seventh overall ahead of Renault's Esteban Ocon, who made a late improvement on softs to take eighth. 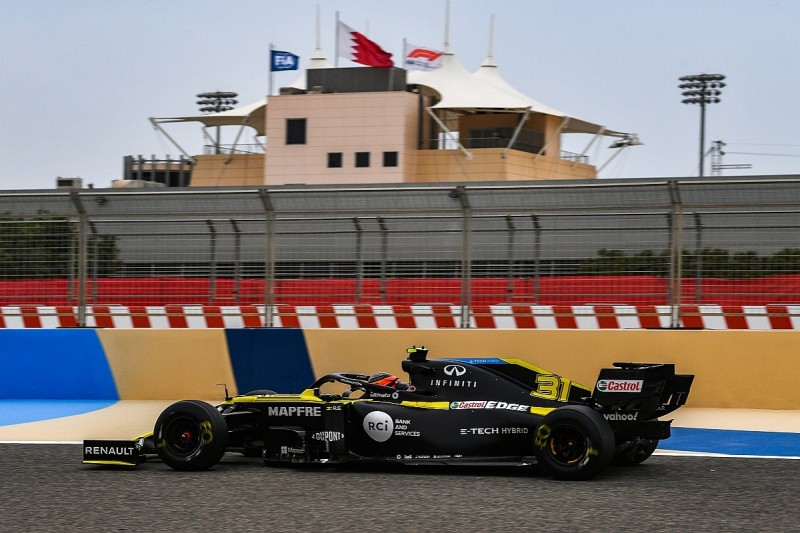 Lance Stroll wound up ninth for Racing Point ahead of Daniel Ricciardo in the second Renault car, who completed the top 10.

Charles Leclerc finished 11th for Ferrari, but reported struggles with Pirelli's test tyres throughout the session. All teams were given two sets of the 2021 C3 compound tyre to use in the session, and were required to complete at least six laps per set through FP1.

Leclerc narrowly avoided a run-in with a slow-moving Daniil Kvyat at Turn 13, sparking an angry reaction from the Ferrari driver. He was nevertheless able to edge clear of team-mate Sebastian Vettel in 12th place.

Robert Kubica made his latest practice appearance for Alfa Romeo in Bahrain, finishing 13th overall as he deputised for Kimi Raikkonen. The Pole finished one-tenth of a second clear of full-time Alfa Romeo driver Antonio Giovinazzi, who finished 16th.

Romain Grosjean and Kevin Magnussen took 14th and 15th place respectively for Haas in FP1. Grosjean narrowly avoided the wall after a high-speed spin at Turn 7 early in the session, ensuring he could still complete a full programme.

Kvyat finished 17th for AlphaTauri ahead of McLaren's Lando Norris in P18, while Williams drivers Nicholas Latifi and Roy Nissany - who took over George Russell's car for the session - propped up the classification.