Charles Leclerc landed an emphatic sixth pole of the 2022 Formula 1 season as he took control over the Red Bulls in a thrilling qualifying for the Azerbaijan Grand Prix.

The Ferrari driver had been adrift of team-mate Carlos Sainz in the early part of Q3 but on his final flying lap, turned in a rapid first two sectors to steal a march on all his rivals.

A weekend-best time of 1m41.359s at Baku, a circuit thought to favour Red Bull, gave him a substantial 0.282s cushion over Sergio Perez as points leader Max Verstappen snared third.

Sainz, meanwhile, backed off on his last attempt to settle in fourth but was still some nine tenths quicker than the next car - George Russell in the Mercedes W13.

Former championship leader Leclerc, who has not won a race since the third round in Australia, was 0.05s adrift of Sainz after the first batch of quick laps in the final shootout for pole.

But he still retained second as Perez brushed the inside wall when entering Turn 5, having already oversteered on the exit of Turn 1, to nick third ahead of Verstappen.

The Ferraris were doing the damage in the first two sectors although the RB18s were faster by 0.2s on the long sprint to the line.

Sainz was first to go for a final flying lap but was slow through the Turn 5-6 chicane and messy on the exit of Turn 7 to back out of his effort.

That threw the attention on Leclerc, who set the fastest first and second sectors of the day to have a massive half-second cushion ahead of the flat-chat run to the line.

Perez was able to use the grunt of the rebadged Honda power unit to close a little after setting two personal best sectors but failed to match the rapid Monegasque across the line by nigh on 0.3s. 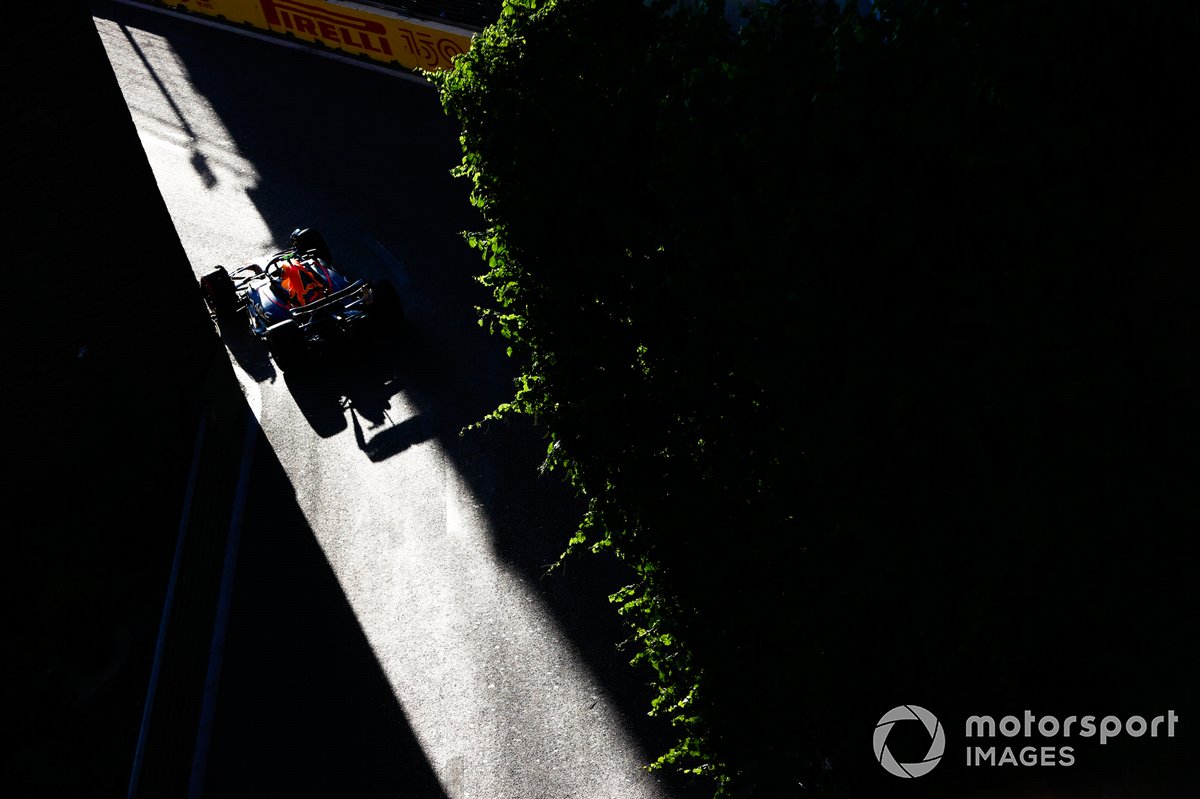 This came after the Mexican was late out for his final lap when the engine struggled to fire, which team-mate Verstappen questioned - seemingly having been left without a tow.

The trend of Verstappen falling fractionally behind his Monaco-winning stablemate continued as the defending champion ran to a 1m41.706s – missing out to Perez by 0.06s.

Sainz held on to fourth ahead of Russell, while Pierre Gasly ran to sixth as part of an impressive double Q3 appearance for AlphaTauri.

Lewis Hamilton, who struggled with his brake pedal, porpoising and was put under investigation by the stewards for driving too slowly in Q2, mustered seventh ahead of Yuki Tsunoda in eighth place.

A fraught session for Aston Martin ended with Sebastian Vettel snaring ninth, the four-time champion recovering after nosing into the barriers in Q2 after a Turn 15 lock up and being fortunate not to damage the car.

Fernando Alonso, meanwhile, completed the top 10 although caught the attention of Alex Albon earlier on, when he was accused by the Williams driver of deliberately causing a yellow flag.

Lando Norris was the first driver to miss out on Q3, having missed the cut off by 0.022s in the 15-minute Q2 session - his cause not helped by a late error - that Perez had topped by 0.009s over Leclerc.

The Brit’s first effort was stymied by tyres that were not cool enough before being notably held up by Hamilton at the exit of Turn 12.

His final attempt to make it into the top 10 was undone when he ran straight on at Turn 15, tethering him to 11th as Daniel Ricciardo was another 0.18s in arrears in 12th.

Esteban Ocon was 13th fastest ahead of the two Alfa Romeos.

Zhou Guanyu has impressed by running fifth fastest on five-lap old tyres at the mid-point of Q1 but he and stablemate Valtteri Bottas were shuffled down to 14th and 15th.

It was an evening of struggles for Bottas. The Finn had run off at Turn 3 in the first part of qualifying and then had to abort his next flying lap to leave him adrift of Zhou initially.

Lance Stroll brought out the red flags following a second crash in quick succession in Q1, to pause a session that Verstappen would top with a 1m42.722s to lead Perez by a tenth. 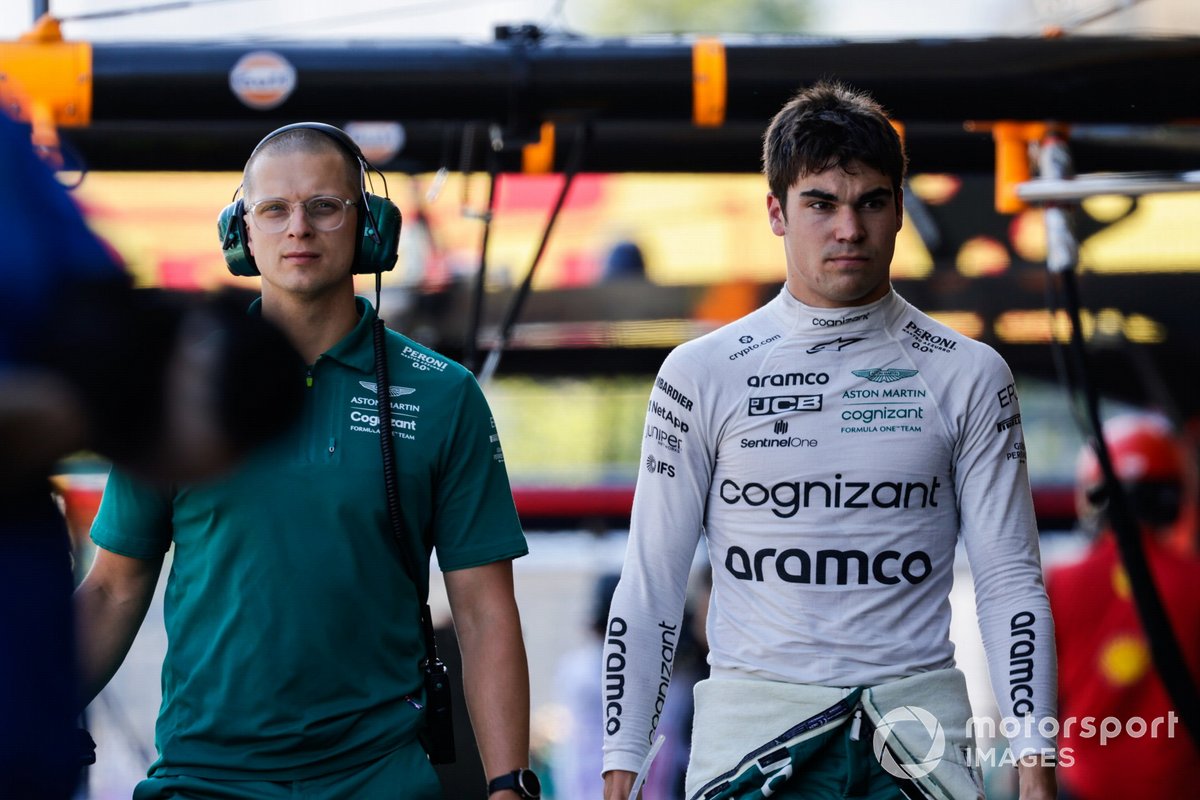 The Aston Martin driver was languishing down in 19th, as team-mate Vettel was running high in fifth place, but brought out a quick yellow flag when he hit the barrier at Turn 7.

The Canadian locked the front-left and nosed into the Tecpro although punched reverse and was given the all-clear on damage to go again immediately for a flying lap to move into Q2.

But with 2m30s of Q1 to the 18-minute Q1 to play, he understeered through Turn 2 and whacked into the outside wall to rip off his front wing and crumple his right wheel.

The session was paused for 10 minutes to add to the delayed start, while the cars most at risk of eliminated queued at the end of the pitlane in a bid to find clear track position.

That teed up a mini-race as all but the Ferraris, Red Bulls and Ocon waited to go out - with Alex Albon, Valtteri Bottas, Nicholas Latifi and Mick Schumacher in the drop zone alongside Stroll.

Schumacher was told to “push like hell” and Norris was handed the instruction: “elbows out, let’s overtake these cars”.

But when the Haas lunged on the McLaren into Turn 16 of the out-lap, both drivers had their lines for the 1.35-mile flat-chat sprint to the next braking zone of Turn 1 ruined.

Norris backed out of his lap and before long and so did team-mate Ricciardo, but they were spared elimination (progressing in 13th and 14th) when Fernando Alonso ran off.

The Alpine driver took to the escape road of Turn 15 to bring out a yellow flag, which the chasing Albon considered to be foul play – accusing Alonso of braking early and still missing the corner.

That left Kevin Magnussen, both Williams drivers and Schumacher at the back of the grid.

The Haas cars are also under investigation for the pitlane incident, thought to be butting their way into the queue out the team garage at the end of the pitlane at the start of Q1.

The session start had been delayed by 15 minutes to allow for repairs to the Tecpro barriers following a spate of crashes in the supporting Formula 2 sprint race.