With Verstappen in command up front and the two Mercedes cars in the wars, the main interest in the race boiled down to a strategy off-set between the one-stopping Leclerc and the two-stopping Perez in a tense final stint.

At the start, Perez launched well off the line to have a look down the inside of polesitter Verstappen at Turn 1 but was never a serious threat, while Leclerc held his third place starting spot and Lewis Hamilton beat Carlos Sainz into fourth.

Leclerc had a small look at attacking Perez into the Turn 5 hairpin further around the opening lap, but the initial action then became Sainz reattacking Hamilton into Turn 6 at the end of the Yas Marina track’s main back straight.

The Ferrari got alongside under braking at the left-hander and he edged Hamilton off over the kerbs, where, like against Verstappen in 2021, the Mercedes scampered over the runoff after briefly getting airborne and held fourth.

As the Red Bull duo eased away from Leclerc, who was then being hounded by Hamilton, the stewards cleared Sainz of forcing Hamilton off and instead looked at whether the Briton had gained by cutting the Turn 7 runoff.

Mercedes therefore ordered him to give Sainz the place back, which gave Leclerc breathing room.

He nevertheless dropped back from the leading pair across the first phase of the race, before Verstappen began to drop Perez and Leclerc homed back in.

Perez became the first driver to stop on lap 15 of 58 to go from mediums to hards, while Verstappen and Leclerc stayed out for five and six further laps respectively to do likewise, which gave them a tyre life advantage over the Mexican for the second stint, Perez also having lost time battling with the one-stopping Sebastian Vettel with a Turn 6 lock-up and off on his out-lap.

Leclerc had emerged from his stop just ahead of Sainz – another early stopper – and he then began to reel in Perez with a series of strong laps. 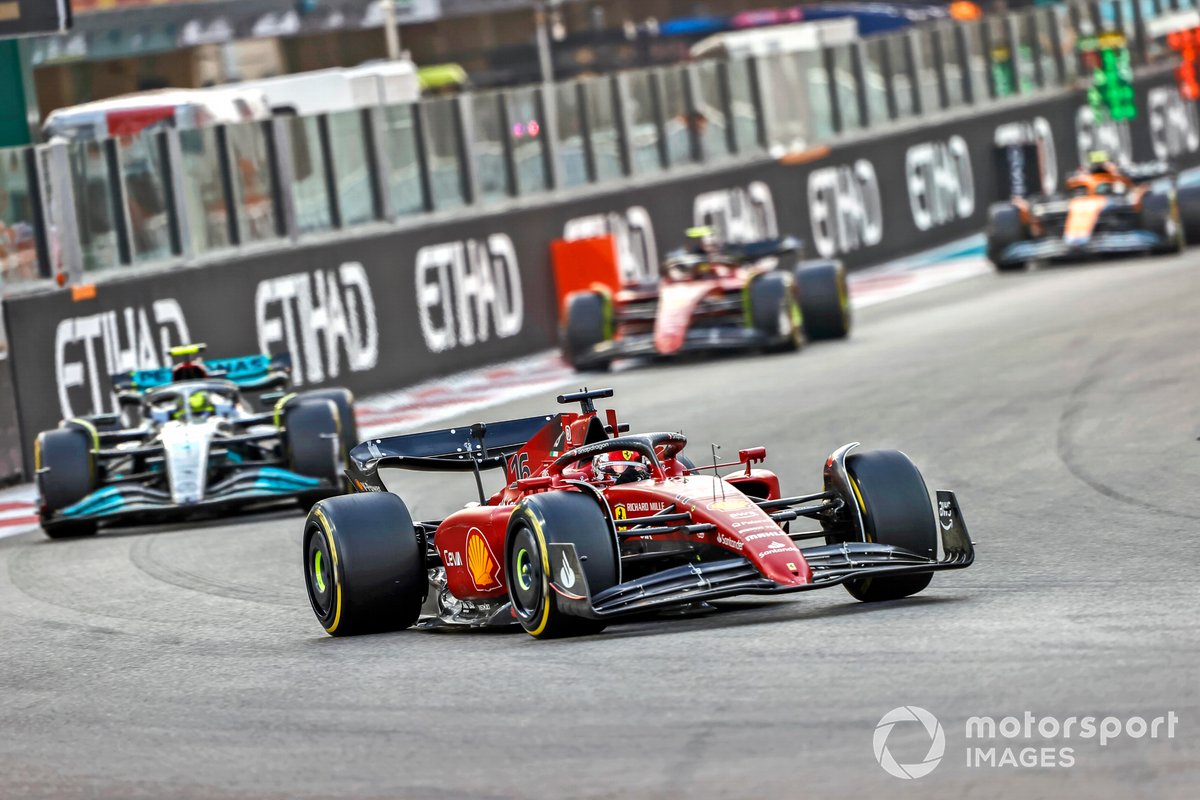 The Ferrari’s pace was so strong that he got to just 1.5s behind Perez and was ordered to “box opposite” the Red Bull on lap 33 – the undercut being very powerful and leading Perez’s team to pit him on that tour.

Ferrari then asked Leclerc if he could sustain his pace and tyre life to the finish on a “Plan C” one-stopper, which he reckoned he could just about manage.

Leclerc’s charge to reach Perez had brought him to around five seconds back from Verstappen by the time Perez stopped, but the leader, by now set on the same one-stopper, eased away over the rest of the race to win by 8.7s – offering Perez advice on how his hards were holding up on a much longer stint and indicating he could push flatout to the end.

Perez’s task was to close a 20s gap to Leclerc in 25 laps, with Sainz and George Russell, who had passed Hamilton in the first stint when the seven-time world champion struggled for pace and suggesting his floor had been damaged in his lap one off, pitting out of his way as they took the two-stopper.

Perez therefore just had to clear Hamilton and various backmarkers, with the Red Bull catching the back of the Mercedes on lap 45.

As the raced down the straight into Turn 6, Perez attacked Hamilton by locked up here again and went deep, which helped the Mercedes pass back by into the Turn 9 hairpin – in scenes reminiscent by reversed from their battle in this race a year ago that so helped seal Verstappen’s first title.

By this stage, Perez had 9.6s gap to close to Leclerc in 12 laps and both Red Bull and Ferrari initially believed he would make the catch. 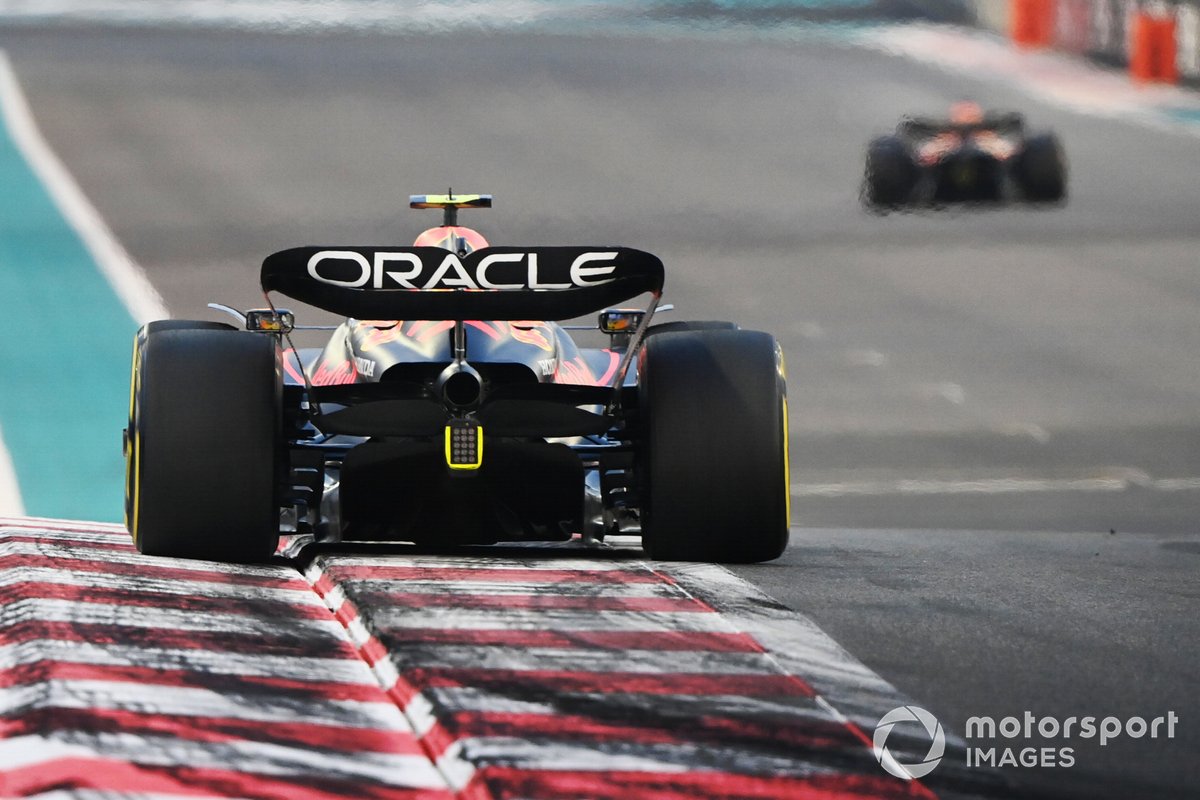 But Leclerc was able to generate impressive life from his aging hards and Perez’s pace also back to drop from lap to lap – his passage also not helped being held up by Pierre Gasly at Turn 6 on lap 56 as the AlphaTauri chased Alex Albon’s Williams, which earned Gasly an angry gesture for his soon-to-be former stablemate.

It was close, by Leclerc held on to keep second by 1.3s over Perez, with Sainz fourth and Russell fifth – a potential battle between this pair headed off by the Mercedes needing to serve a five-second penalty at its second stop after being released into Lando Norris’s path at its first after a slow left-rear tyre change.

Norris, who had passed Russell on lap one before being overcome again in the early stages, held off a late-charging Esteban Ocon to seal sixth by 1.0s.

Lance Stroll gained late on with the extra grip afforded by the two-stopper, while Vettel just ran out of laps to reel in fellow one-stopper Daniel Ricciardo – the German finishing 0.6s and having been frustrated by his strategy meaning running longest of all in the first stint and so being passed by a string of rivals.

The only other incident of note was Mick Schumacher clipping Nicholas Latifi at Turn 5 on lap 40 and spinning the Haas into the outside barriers, from which both were able to drive away.

Williams ordered Latifi to retire on the final lap with an unspecified problem, joining Fernando Alonso as the other DNF runner – the Alpine stopping on lap 28 due to a suspected water leak.