The pair collided on the run to Eau Rouge twice in the Spa F1 race.

They escaped the first contact without damage, despite Ocon hitting both Perez and the support race pitwall, but the second incident gave Ocon front wing damage and Perez a puncture.

The clash follows discord over team orders in the Canadian GP in June and then a collision in the following Azerbaijan race, and has already prompted Force India to declare they will no longer be free to race each other.

Ocon said Perez's driving was "just too much" as he defended following their second pitstops.

"That's the first thing, the second thing is we lost a lot of points.

"He's supposed to be a professional driver, today he didn't show it.

"He has not done that with any other team-mates, I don't know why he's doing it with me.

"I'm going to go and speak to him man to man and tell him the truth. He's going to have a child. I don't know if he wants to die or something. 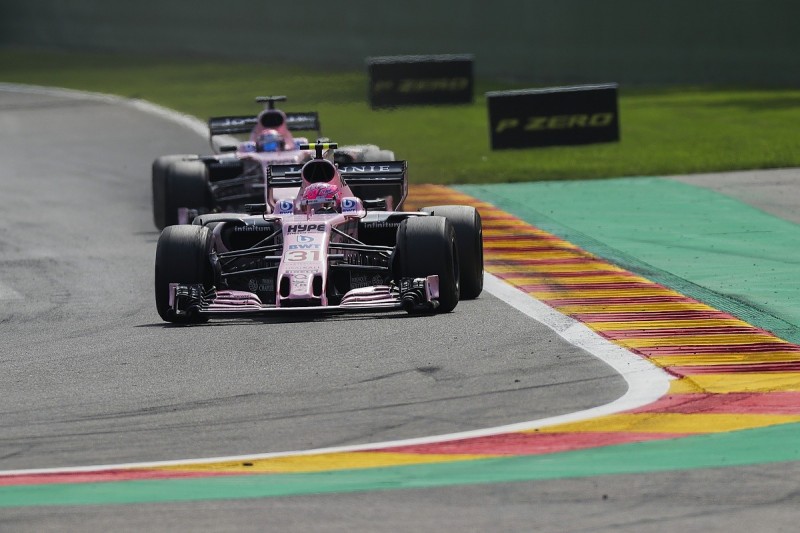 Asked if he thought Perez knew he was drawing alongside in their second clash, Ocon replied: "Of course he knew. I accept the first one. We were three-wide, maybe he didn't see me - even if I think he saw me."

Perez said he was aware Ocon was attacking him in the second incident but believed he would not try to pass until the Kemmel Straight.

"I knew he was there but I also knew there was no more space to go, so I just protected my line," said Perez.

"I thought he was obviously going to make the manoeuvre after Eau Rouge.

He did accept blame for their first-lap coming together, which he said happened as he tried to regain momentum following a poor getaway caused by picking the wrong start mode.

"He probably feels I did it on purpose, probably that's why on the second one he came into contact," said Perez.

"The first one was totally my fault, I didn't see him. I apologise for that one.

"The second one, he was too optimistic and there was no need to touch there."

Perez acknowledged their relationship had been poor since the Baku tangle that cost both a podium shot.

"We have to look back, remember Baku," he added. "There he put me in the wall.

"I'm not saying I did it because of that, but tension started back then.

"It's the first time I've had this in my career and hopefully we can sort it out and start scoring good points for the team."