Red Bull now expects Daniel Ricciardo to take his looming engine penalty at the German Grand Prix, to avoid jeopardising its chances for the following Formula 1 race in Hungary

Ricciardo has already used his allocation of internal combustion engine, turbocharger and MGU-H for the season, and knows that at some point he will need to take fresh parts.

It had initially been expected that the Australian would switch engines, and take a subsequent grid penalty, at the French GP, but Red Bull's competitiveness there forced a change of plan.

But unless circumstances open up an option of taking it at Silverstone this weekend, Horner reckons that Hockenheim a fortnight later is a more logical option.

"Hopefully not this weekend, but probably we would likely incur a penalty around Hockenheim time, as we would want to avoid Hungary," said Horner, when asked by Autosport about the plan for the changes.

"Hungary is a key opportunity for us as it's a low power dependent circuit to hopefully be in contention for a win."

Asked if Red Bull would also take Renault's long-awaited new MGU-K, he said: "No. Certainly not before the summer break."

The engine penalty situation comes at a time when Red Bull has hit strong form and is emerging as a potential title contender.

Since its drivers collided at the Azerbaijan GP, it has scored 134 points - with Ferrari having scored 133 and Mercedes 127 in the same period. 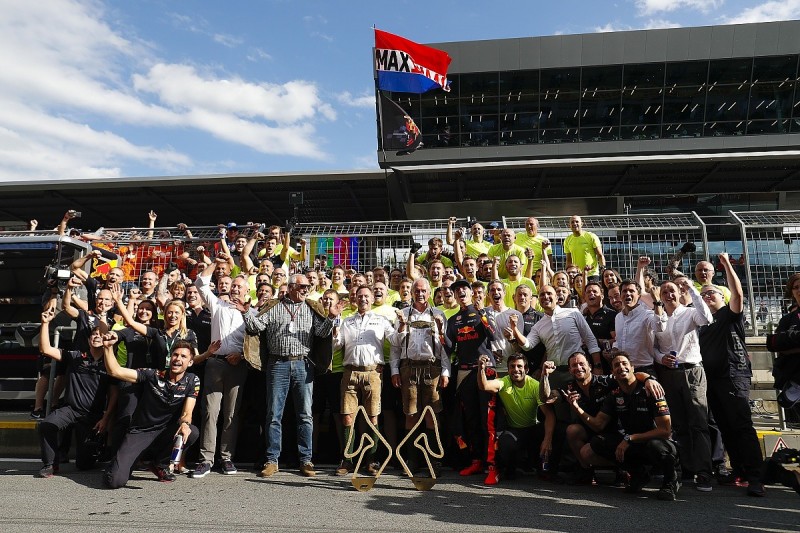 Ricciardo and Verstappen are 50 and 53 points behind championship leader Sebastian Vettel respectively, while Red Bull is 58 adrift of constructors' leader Ferrari.

When asked by Autosport if he felt his team had a title shot, Horner said: "I think we definitely have an outside chance: nine races, three victories, same amount of wins as Ferrari and Mercedes.

"Our Achilles heel has been not scoring with both cars, either through reliability or other incidents: although F1 is full of ifs, buts and maybes.

"If you look at the positions we were in and should have been in, then we should be leading the championship today. But the scoreboard is slightly different to that.

"We've closed the gap over the last few races and it's still a long long way to go. There are 12 races left and so yeah, I think you have to consider us as an outside contender.

"There are some circuits coming up that should play to our strengths, places like Hungary, obviously Singapore. And there are circuits that will not be so good for us.

"But I think one of our major assets is as a race team, we're extremely versatile and we've been very creative on strategy, pitstops, pit work as a team. The team's working extremely, extremely well.

"So I think there is a chance in both championships and we certainly haven't written anything off at this point in the year."