The team's new wing was seen for the first time on Thursday, featuring a reworked, shorter endplate.

This endplate exposed the profile of the uppermost element, aiming to strengthen the outwash effect produced by the wing.

However, the 2019 FIA technical regulations go some way to forbidding this practice, stating those profiles must be bounded by a "virtual endplate surface". 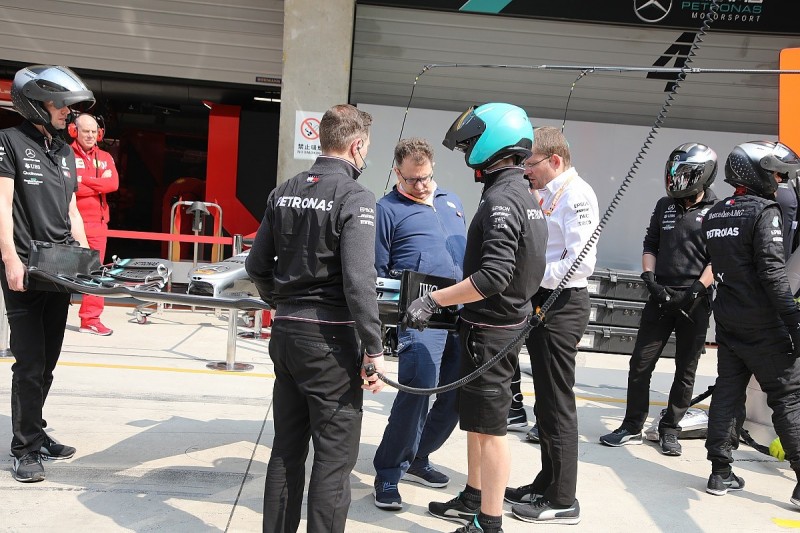 Article 3.3.5 relates to the new endplate geometry dictated by new regulations for 2019, defining a simpler design to limit the amount of airflow turned around the front wheel.

This also states that the endplate itself must "fully enclose a minimum of 95% of the virtual endplate surface", which allows for small cutouts - which teams have done typically on the top trailing edge corner.

The wording of those two rules creates a possible grey area, which Mercedes attempted to exploit.

Asked by the FIA to make changes prior to FP1, Mercedes modified the outboard side of the uppermost element, cutting off the corner of the uppermost trailing edge to ensure that none of the profile remains exposed.

This satisfies the FIA, which was also concerned that the exposed wing may be conducive to punctures should the wing become damaged.

It is believed that Red Bull attempted to exploit this grey area too earlier in the season, using a small amount of the exposed top element in conjunction with a rectangular cutout at the endplate's trailing edge.

The FIA asked for this to be removed, and the team's current specification endplate hence features no cutouts.

After the changes were made, Mercedes ran in an approved configuration for both sessions.

The supposed Ferrari edge that makes China so vital

Promoted: Will Charles Leclerc make up for his heartbreak in China?