While Caterham has had the more competitive car since June's British Grand Prix, it needs a 13th place to move back into 10th in the standings.

Marussia had the edge in the first half of the season, finishing ahead in five of the first seven races, but in the last eight races Caterham has been more competitive.

With both teams still falling short of competing in the midfield, Caterham is relying on cars ahead hitting trouble to finish high enough up the order.

"We need to have luck," van der Garde told AUTOSPORT. "Of course, we can try different strategies or have rain in a bit of the race, which will help us a lot because those conditions suit the car, but other than that it is pure luck.

"We were so close in Hungary, so close in Korea where we were 14th, but every time it has been one place short.

"All we can do is keep finishing ahead of them and wait.

"An opportunity will come between now and the end of the championship because guys are fighting hard and a lot of people can make mistakes.

"So we have to stay calm, not make errors and see where we end up."

The Dutchman believes Caterham deserves to beat Marussia having made so much progress since a difficult start to the year.

"In the beginning, they had a better car but after a few races, especially Silverstone, we have been faster all the time." 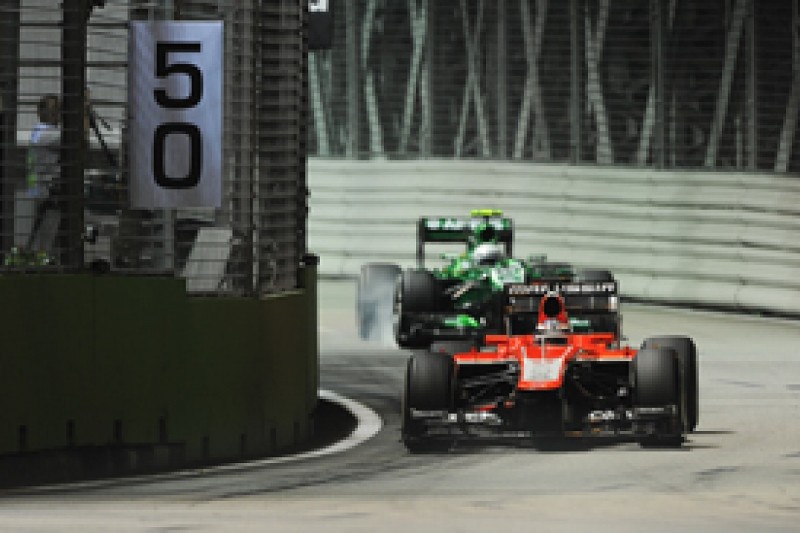 THE BATTLE FOR 10th

Neither Caterham nor Marussia has scored points, so their final championship positions are set to be decided on a countback to best result.

As Caterham already has three 14th places, a single 13th place for either van der Garde or Charles Pic will be enough to move it into 10th.