The Finn clocked a 1m12.935s at the Circuit Gilles Villeneuve in Montreal to finish 0.215 seconds clear of Lewis Hamilton's Mercedes.

Championship leader Sebastian Vettel and Valtteri Bottas were third and fourth respectively with the top four separated by 0.375s.

The super-soft was the tyre of choice for the early running, before teams turned their attention to the ultra-softs for qualifying simulations.

Vettel was among the first to do his low-fuel run and promptly went quickest, with team-mate Raikkonen slotting into second.

Raikkonen then improved to go fastest, with Hamilton moving up into second and Vettel demoted to third.

Max Verstappen was the leading Red Bull in fifth, 0.453s off the pace, but his session was curtailed 20 minutes early when he stopped out on track with a gearbox problem.

The session was red-flagged while the teenager's car was recovered from the side of the track between Turns 7 and 8.

It compounded a frustrating afternoon for the team, with Daniel Ricciardo spending most of the session in the garage after suffering an engine problem.

Felipe Massa was sixth, but he was nearly seven tenths further back in the Williams, with Fernando Alonso bouncing back from a late start to the session to go seventh at the chequered flag.

Romain Grosjean was 11th after he endured a frustrating session, spinning twice at Turn 6 and once at Turn 1 before ranting on the radio to his team about the situation. 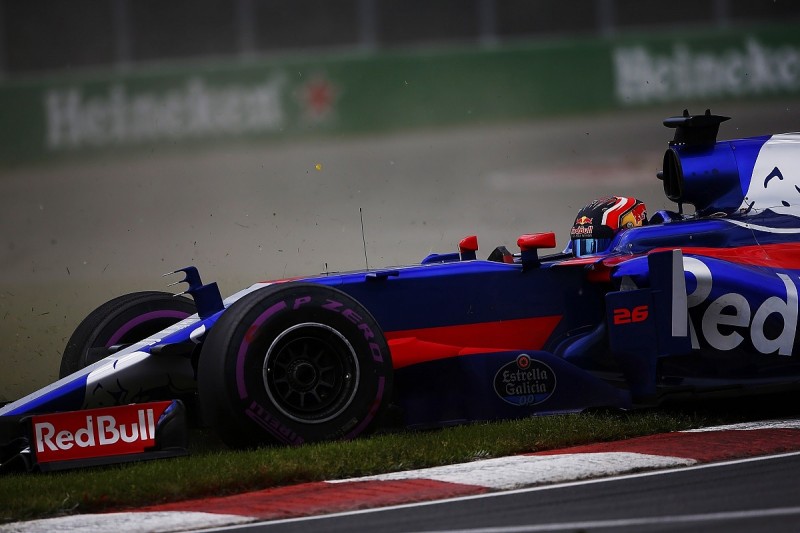 He was just one of a series of drivers, that included Vettel, Bottas, Kvyat (pictured) and Perez, who spun during the session.

Carlos Sainz Jr recovered from failing to set a timed lap in FP1 to rack up more than 40 laps in the Toro Rosso, ending the day 13th-fastest.

Near the back of the field, Stoffel Vandoorne failed to set a representative qualifying simulation time after spinning at the final chicane on his new-tyre run.