Williams has arrived at Silverstone with a new bargeboard package for the British Grand Prix, as it seeks to reinvigorate a difficult Formula 1 season at its home race

The team has struggled to define its development path throughout the season so far, and new parts have come as something of a premium throughout 2019.

For the British GP, the team has redefined the turning vane package around the sidepod inlet, with a new upper element (yellow arrow), as shown in Giorgio Piola's photo. 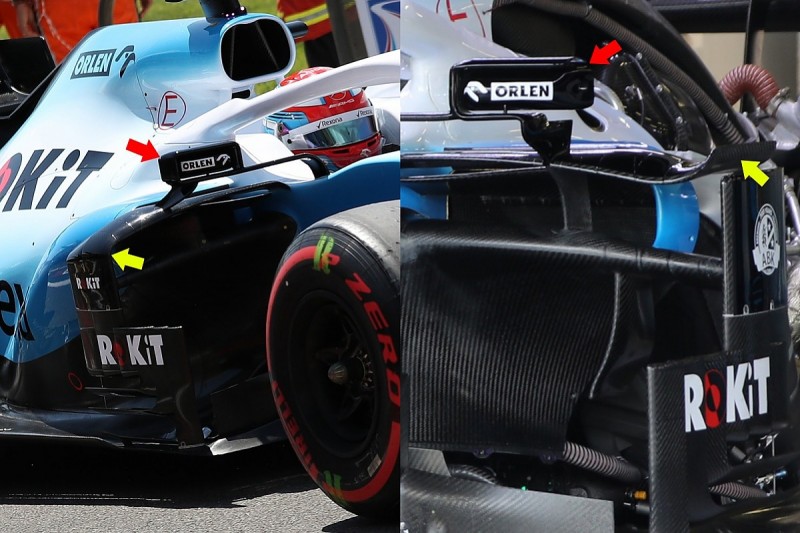 Previously, the element was of a consistent curvature, and bridged the transition to the vertical turning vane - but now, these two parts have been split.

The leading edge now sweeps downward, before curving back up towards the outboard edge, but further down the chord length it sweeps upwards more dramatically.

This suggests a more concerted effort to take airflow from lower down, closer to the inlet aperture, and working it harder to bring it over the top of the sidepod.

Meanwhile, the curved ends will generate some degree of tip vortex, but the upward curling of the outboard section can determine the placement of this vortex.

In a normal, horizontal wing element, the tip vortex is created as a result of the high pressure air on top and the low pressure air underneath coalescing, creating a larger and more unruly flow structure.

By creating that curl, the difference in pressure zones are not nearly as large, and so any vortex generated is a lot tighter-knit.

This can then wash over the sidepod and move towards the rear, where the properties of that flow structure are useful. 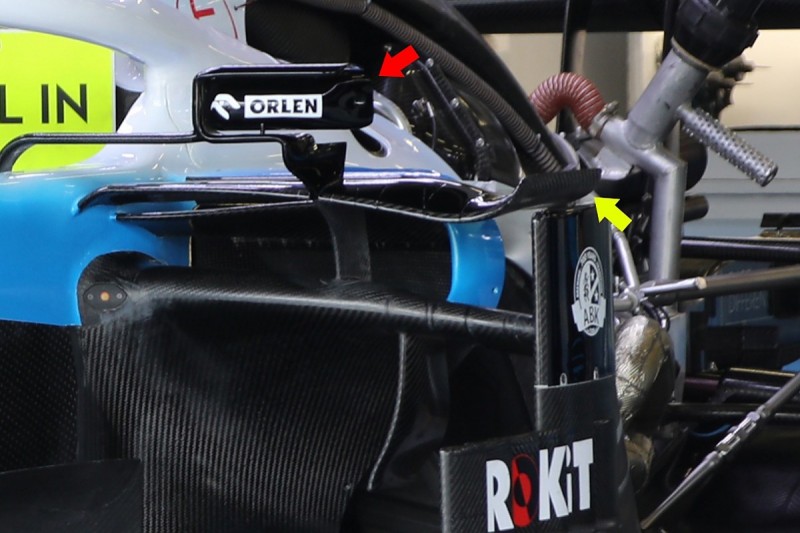 This ties in with a new mirror assembly (red arrow), which features a new aerodynamic shroud around it - not dissimilar to the shroud around the mirror design it used in pre-season testing.

Concerns over this mirror - which was curved in shape and was problematic for the drivers' rear-view vision - led to a hasty redesign for the season opener in Australia.

This has now been redeveloped, sending laminar airflow downwards to trim the low pressure region developed by the mirrors, which minimises the overall drag.

Renault, Mercedes and Red Bull use similar mirror designs to reduce their impact on the overall aerodynamics package.

Why Claire Williams isn't running from a dire 2019