The German dropped to fourth at the start and spent the first half of the race stuck behind the two Williams drivers, while Hamilton took the lead after the first round of pitstops and eased clear.

While all the leaders stayed out on slicks during the first shower at Silverstone, when it started raining again Hamilton reacted first and took on intermediate Pirellis one lap before his rivals.

Rosberg had passed Felipe Massa and Valtteri Bottas and closed to within a couple of seconds of his team-mate before Hamilton stopped, but the German scrabbled for grip with slicks for an extra lap on the wet track and dropped almost 10 seconds back again.

"That [phase after the first stops] was not so great, I just had two Williams in front and I could not get close, I was completely blocked," he said.

"I was thankful when the rain came. I was able to attack and pass both Williams and close on Lewis a lot.

"I was hoping it would stay like that and I thought I could attack Lewis at some point.

"Then Lewis boxed and I was pretty sure it was the wrong call. It was still touch and go at that time, so I was actually quite happy that he boxed.

"But it was the right call in the end - it started raining more on that lap, so that was it.

"I had to take that chance, because just following Lewis into the box is a definite lose for me, so I might as well stay out for one more lap at least and it didn't work out."

Mercedes motorsport boss Toto Wolff admitted after the race it was Hamilton's call to change for intermediates and the championship leader said he felt a new-found conviction in making the strategy decision solo.

"The rain came and I lost temperature in my front tyres," Hamilton explained.

"It's always trickier for the guy in the lead, you are the first one to get to it and it's questionable how much risk you take.

"I think it's the first time I made the perfectly right choice to say I was coming in, because I could see the rain coming more.

"I've never had that before and I feel really happy about that. 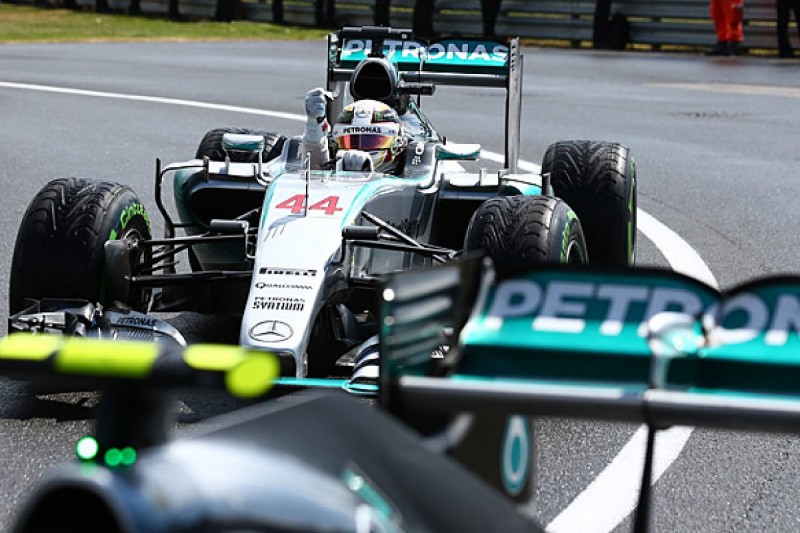