The Red Bull duo had spent much of the session in the garage or on single-lap data runs, but both improved in the final 20 minutes.

Conditions largely dictated the order, with the first half hour proving the optimal time to run before rain returned and times consequently dropped significantly.

Rosberg epitomised that trend, setting an early 1m24.781s benchmark that would remain unbeaten for the remainder of the 90 minutes.

Hamilton moved into second moments later, just over four tenths of a second down on his team-mate.

Both men had moments even as they set their fastest times however: Rosberg went too deep into the Senna S immediately after going top for the first time, while Hamilton was the session's first spinner when he lost the rear of his Mercedes through the Descida do Lago.

Button also set his best time early on, but behind him Alonso bucked the session's overall pattern when he surged into fourth at the halfway mark, just as the rain began to worsen.

Red Bull meanwhile was yet to set any times, with Webber ensconced in the garage and Vettel electing to run cautious data-gathering laps on the hard slick compound.

At that point times were around two seconds per lap slower than the early running and the top order looked settled, but the session swung 20 minutes from the end when the rain abated.

Vettel and Webber were the chief movers: the Australian, competing in his final grand prix, slotted into fifth on his second run, but was then demoted when Vettel moved into third 10 minutes from the flag. 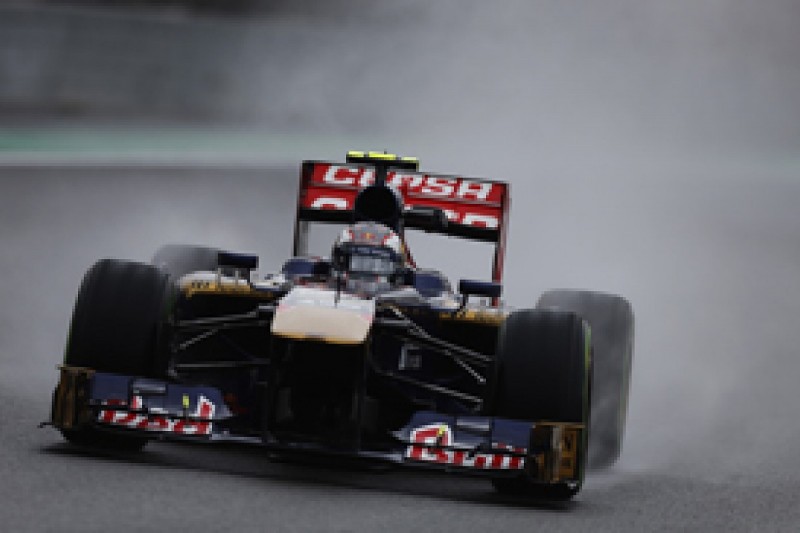 Lotus's Heikki Kovalainen and Sauber's in-the-spotlight Nico Hulkenberg were next up in ninth and 10th respectively.

Felipe Massa ended the first session of his Ferrari swansong in 11th, fractions ahead of Esteban Gutierrez and Romain Grosjean.

The conditions meant none of the teams were able to sample Pirelli's 2014 prototype slick tyre, with Vettel's data runs on the hard compound the only slick running of the session.