Brazilian GP: Elated Vettel says race was the toughest ever for him

The Red Bull driver dropped from fourth to seventh at the first corner, then fell to last after a collision with Bruno Senna that left him with a damaged car.

Vettel rapidly charged back to seventh place, but would bounce up and down the order for the rest of the race as the conditions ebbed and flowed from wet to dry.

He was also delayed with a slow final pitstop, before recovering to sixth - which was enough to clinch the title despite his rival Fernando Alonso finishing second.

"It was an incredible race. They tried everything to make it difficult for us today," said Vettel.

"Inside the car when you get turned around in Turn 4 for no reason, it's not the most comfortable feeling. I was quite lucky that nobody hit me from that point onwards."

Vettel believes he and Red Bull showed great fortitude after the clash.

"I think it was the toughest [race we had], but we kept believing and remained ourselves," he said. 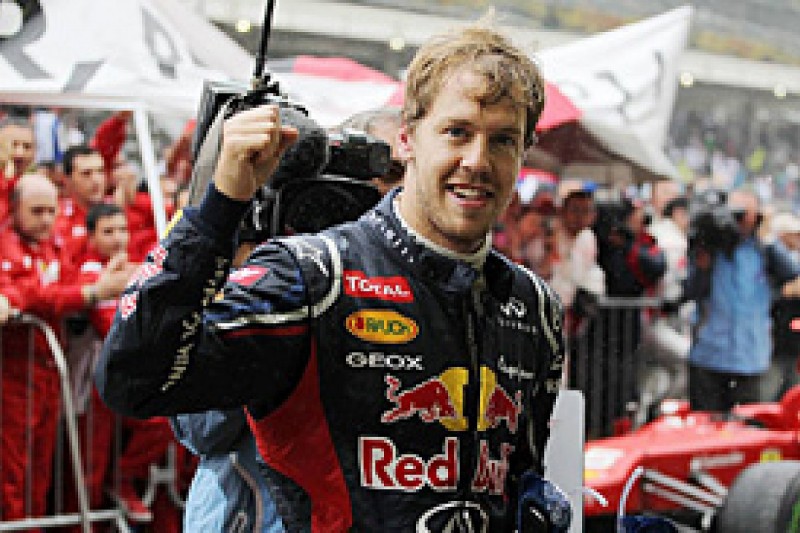 "A lot of people tried to use dirty tricks, certain things that from our point of view that were beyond the limit and we never got irritated or distracted by that. We gave a big push to the end."

Vettel also reckons he proved a point with his surge back up the order in the tricky weather.

"This weekend, people tried to push us in a certain direction by saying when it rains it will be difficult for us," he said.

"I think we have proven today that we like wet conditions as much as dry conditions, in that case today it even helped us a little. After 10 or 20 laps I was back in fourth or fifth, right behind Fernando."

When the track dried up, Vettel said the damage to his car began to show.

"Fortunately the front wing was intact, but in the dry conditions there was no pace," he said.

"Really difficult. How do you try and keep calm? You just push and push and make a comeback."

Brazilian GP: Massa believes his momentum is a good omen for 2013