Contact with Daniil Kvyat resulted in Grosjean crashing at Turn 3, with the impact with the barrier tearing his Haas F1 car in two before sparking a large fire.

Grosjean climbed out of the wreckage that was quickly tended to by the FIA medical staff, who helped subdue the fire using extinguishers. The Haas driver has been taken to hospital in Bahrain with a suspected broken rib, having also sustained light burns to his hands and ankles.

Grosjean's Haas car went through the barrier, with the entire rear end breaking away, which triggered a spectacular fire.

Brawn has said he was worried by the way the barrier opened up, allowing the chassis to pass through.

"It's shocking for everyone in F1 to see an accident of that severity," he said. "We're not used to that, fire being involved as well.

"But I think it's a tribute to the work that the FIA and the teams have done over the years. I think we remember the controversy of the halo when it was introduced. And I have to give credit to Jean Todt, because he insisted that it should come through. 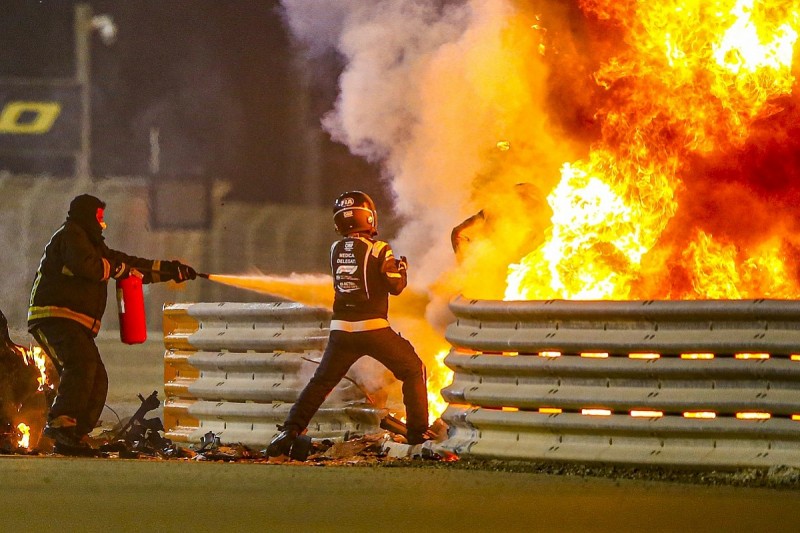 "And I think today, we might be looking at a different situation that we didn't have the halo. And for me, that's what prised, and managed to keep the barrier apart, when the car went through it.

"But I'm sure we'll have a deep investigation to understand what we can learn from it. Because seeing a barrier split like that is clearly not what we want to see."

Brawn praised the efforts of the FIA medical delegate Ian Roberts and the local marshals who were on the scene so quickly.

"Credit to everyone. Clear thought, clear purpose. They didn't hesitate. They did exactly what they needed to do today, and you can't fault them," he said.

"And we're proud to have them all. And I think it's very reassuring for the drivers to see that level of professionalism, and that response. And from that respect, I think it was perfect.

"Obviously, we don't want to see an accident like that. But in terms of the response. I can't really think there could have been anything more effectively done."