Already down the order after picking up a puncture on the first lap, Bottas complained over the radio that his seatbelt had come undone on lap 33, and pitted at the end of that lap to have them fastened again.

"His seatbelt came undone, so he told us and he pitted immediately," said Williams performance chief Rob Smedley.

"We did them up in the pits, but to understand why they've come undone, it's really quite a worry in itself that has happened while they're driving at these sort of speeds.

"Valtteri had another issue some years back, I can't remember exactly when. I don't think it was a similar issue, but it was something to do with the seatbelt.

"We've just got to go away, do the correct analysis with due diligence, and the main thing is we get it fixed for [the next race in] Malaysia.

"Obviously, we've done the whole season without any seatbelts coming undone in practice or the race or anything like that, so it's a bit of a worry that it's suddenly just happened."

That additional pitstop, just two laps after Bottas had pitted for a second time to take on fresh tyres, led to Williams retiring him from the race on lap 36.

"When he pulled away, he dumped the clutch inadvertently, just because of the length of the pitstop," Smedley explained.

"That put quite an over-torque in the first gear, so we weren't happy with the position we were in because if the ratio had failed then it could have caused untold damage in the gearbox, so the best thing to do was to stop." 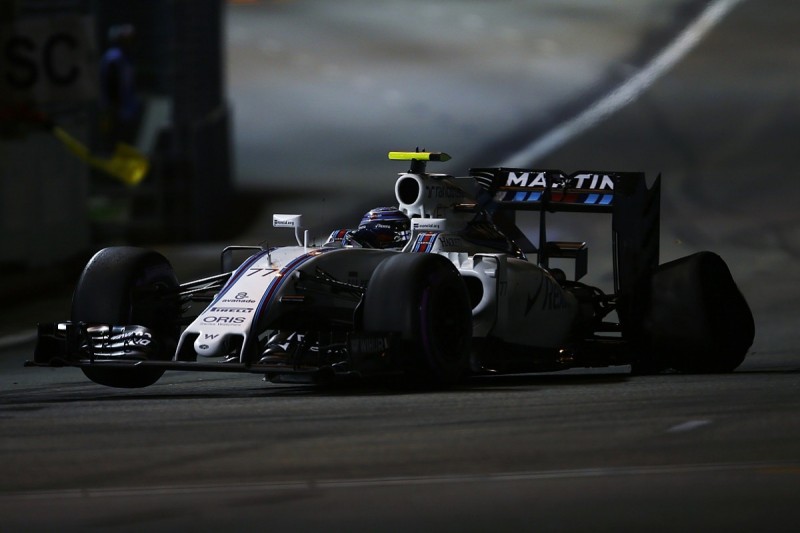 The retirement brought to an end what Smedley conceded had already been "a very difficult" day for Botttas.

After drivers had taken evasive action to avoid the slow-starting Max Verstappen, the Finn's left-rear tyre was tagged by Jenson Button's McLaren, causing a puncture.

"Jenson, round Turn 1 after the start, drove into the back of him - which is how Jenson broke his front wing - so we needed to stop," said Smedley.

"What always happens with a puncture is that the belt package comes off, and then it was flailing round and it destroyed most of the left-hand side of the tyre seal area.

"So we were quite a way down on rear downforce, but more importantly than that on this circuit, it shifted the aero balance too far forward.