Fernando Alonso was able to tiger through from ninth on the grid to second ahead of polesitter Lewis Hamilton, but fellow title contender Kimi Raikkonen's long finishing streak ended with a brake problem.

It took less than half a lap for Vettel to claim control of the race.

Hamilton's Mercedes had stayed ahead through an uneventful start, but Vettel attacked immediately and overtook on the run to Les Combes.

That was the last Vettel's rivals saw of him, as the world champion alternated between cruising to protect his machinery and chucking in crushing fastest laps to prove how much he had in hand.

Alonso's confidence in Ferrari's race pace proved well-founded as a muscular first lap took him straight up to fifth place.

A later first pitstop brought Alonso right up behind Hamilton, who he then passed as the Mercedes slipped a touch wide at La Source.

Hamilton retaliated with DRS on the Kemmel Straight, yet Alonso was able to fend him off despite a vicious twitch under braking.

Button looked like he might have a say in the podium fight as he ran long and hinted at a one-stop strategy.

In the end he had to follow the two-stop trend, dropping him behind Hamilton, Rosberg and the slow-starting Mark Webber.

The Australian's Red Bull showed great late pace having used hard tyres in the middle stint and softs at the end, the opposite strategy to most rivals, but ran out of steam when he came up behind the Mercedes.

Raikkonen looked set to finish adrift of this group even before a front brake issue forced him to retire his Lotus.

Felipe Massa resisted Romain Grosjean, the only successful one-stopper in the points, for seventh place. 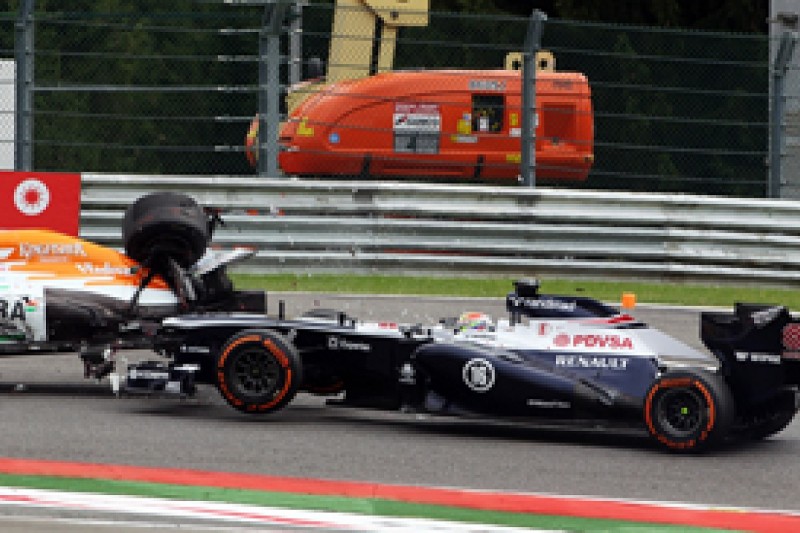 Grosjean had an early brush with Sergio Perez in which the stewards judged that the Lotus had been forced off the road at Les Combes.

That earned Perez a drive-through penalty, and that plus late tyre wear on a one-stop left him 11th at the flag.

Qualifying sensation Paul di Resta faded from the start and was in a four-car battle outside the points when he was taken out at the Bus Stop by Pastor Maldonado.