Williams Formula 1 driver George Russell believes his incident with a loose manhole cover in Azerbaijan Grand Prix practice, measured as a 4G vertical impact, could have been "much worse"

Russell ran over the manhole cover early in first practice, triggering a red flag that eventually led to the cancellation of the session.

He acknowledged that he was fortunate to escape unscathed.

"If that was 10-15mm higher, it was going straight into where I'm sat," Russell said. "It could have been much worse.

"It's a shame for all the guys, you've got your full programmes, your plans for the weekend, and it all gets thrown down the drain, literally."

Damage to the chassis, which can be repaired back at the team's factory, meant that he had to take the spare FW42 tub and therefore had to miss second practice under FIA regulations.

Williams will also replace the Mercedes ERS module due to the force of the hit the car took, although it may still be usable after it has been checked in Brixworth.

"It was obviously a very large hit," said Russell. "I was just shocked really more than anything.

"Just going down the straight doing your normal stuff, and I got this big hit.

"Obviously a lot of damage, and the car turned off straight away, because of the damage.

"Surprisingly, it didn't hurt. It set the fire extinguisher off, and as that was so cold, I thought I was sort of burning, so I got out of the car as quick as I could!

"I don't know the speed, but I know it was 4G of vertical load - which I think is quite high.

"I knew I hit something on the track, but I didn't realise it was a manhole cover.

"It was already quite bumpy down the straight as it is. It was quite a shock when I smashed it, and very dangerous really." 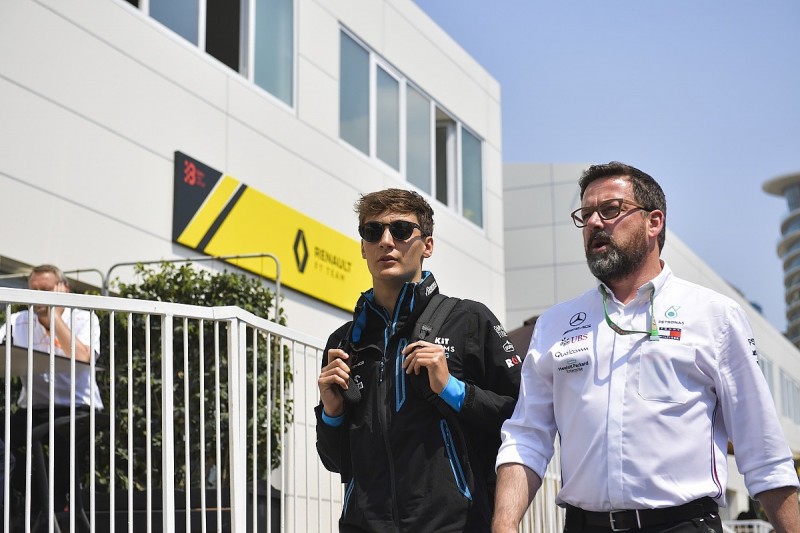 He admitted that the rest of the weekend will be tough given his lack of mileage.

"I've lost both practice sessions now. Obviously everybody lost FP1, but I lost 40 laps in this session maybe as well," Russell said after watching practice two.

"Only a one hour session tomorrow before quali, and we won't be doing much more than one qualifying session, I expect.

"We're going into the race quite blind."

Russell had been unwell with a respiratory infection since the last race in China.

He missed his Thursday media commitments and has been unable to train.

"It's quite up and down, really. I've had another day of rest so I should be in better shape tomorrow.

"I haven't trained at all since China, just been in my bed doing nothing really.

"I was improving then woke up yesterday morning and felt woeful again."