Russell struck a loose drain cover during the opening free practice, with the impact badly damaging his car and forcing Williams to build him a new chassis for Saturday.

The FIA later explained that the drain had come loose because of a broken underside mounting.

With a need for track officials to inspect all the drains around the circuit to ensure that there would be no repeat issue elsewhere, the first practice session had to be abandoned.

Formula 2 qualifying was also put back by half an hour.

The second F1 session then ran on schedule. 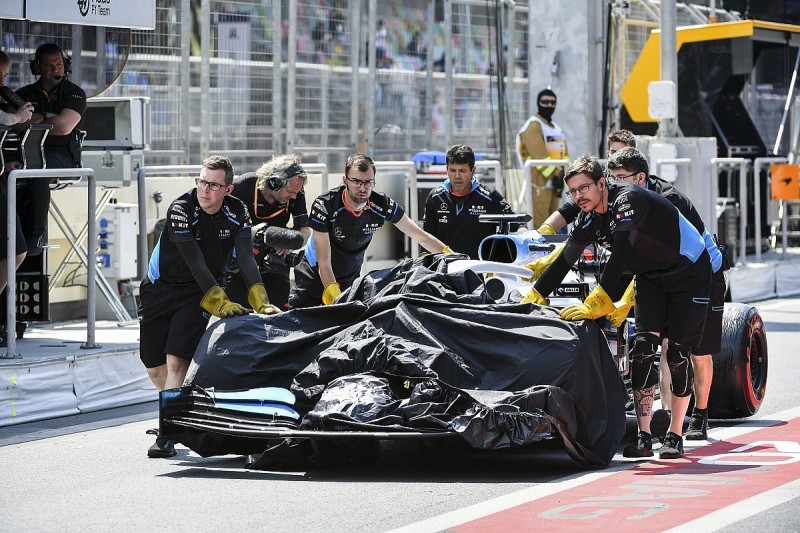 Alfa Romeo driver Raikkonen thinks the FIA should shoulder the blame for what happened, as he said the lost track time "destroyed" Friday for the teams and fans.

"Obviously it was far from ideal for everybody and we looked like amateurs here today," said Raikkonen.

"It should not be like this. It's up to FIA to make sure that track is like it's supposed to be.

"It seems to be that every year some drainage hole comes loose or something slides up.

"It's up to them to check and tell the people here. It is their responsibility to have the track as it is expected to be.

"Luckily nobody got hurt, but it obviously destroyed everybody's day.

"Also for the people who came to watch here it is far from ideal."

When asked if the matter would be brought up in Friday night's drivers' briefing, Raikkonen said: "It's not the first time. Hopefully it's the last time."

There was a further incident while Russell's car was recovered to the pits, with the truck carrying it striking a bridge that it was too high to get under.

That led to hydraulic fluid from the damaged crane section on the truck pouring onto the Williams and a second vehicle having to be arranged to bring it to the garage.

With drivers effectively only having one session to get all their Friday running done, Raikkonen said it was hard to draw conclusions from the timesheets.

"It was a confusing day," he said.