Nico Hulkenberg set the fastest time on the first day of the second pre-season Formula 1 test in Bahrain, as Mercedes-engined teams filled three of the top four spots on the timesheet

The Force India driver completed 78 laps of running and was the only man to crack the 1m36s.

Alonso earlier brought out the first red flag of the day when his Ferrari left the pits billowing smoke thanks to an oil leak first thing in the morning.

Hamilton and McLaren's Kevin Magnussen both took turns to top the times during the day. Hamilton wound up third fastest and Magnussen fourth.

The team spent the entire morning holed up in the garage trying to get the RB10 to work.

World champion Sebastian Vettel eventually took to the track in the afternoon and set the fifth fastest time, before spinning due to a rear brake issue and causing a lengthy delay with the day's final red flag.

Romain Grosjean gave the new Lotus E22 'twin-tusk' design its public debut in Bahrain but completed just eight laps and was the slowest of the nine drivers to do a flying lap.

Sauber's Adrian Sutil suffered a spin at Turn 1 in the morning, but still covered more laps than any other driver (82). He completed the top six just two tenths shy of Vettel. 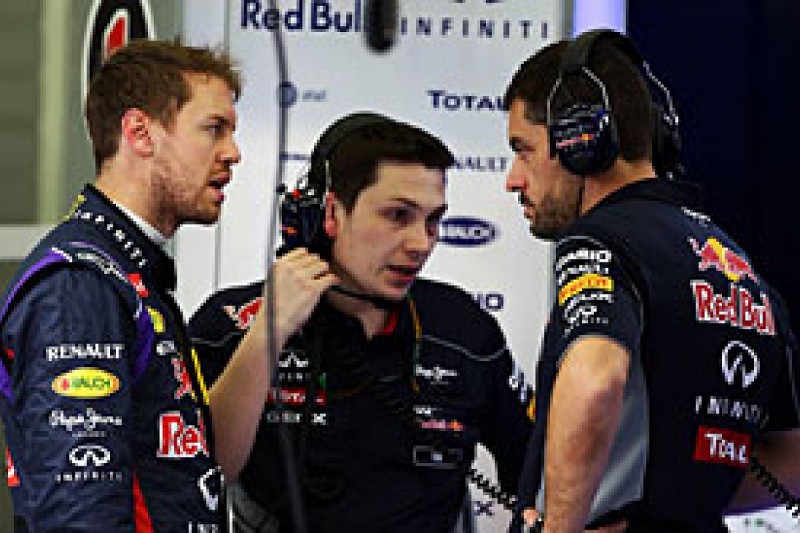 Caterham's Robin Frijns managed 68 laps and was the fastest of the Renault-powered runners until Vettel's brief 14-lap flourish.

Toro Rosso also suffered a long delay with its new car. An oil leak was among the problems that restricted GP3 champion Daniel Kvyat to just five laps and the eighth fastest time.

Felipe Massa was among the pacesetters at Jerez, but only completed a handful of installation laps on day one in Bahrain, as Williams suffered a "fuel system issue" with its FW36.

Marussia's Jules Bianchi managed only three laps (the fewest of all) as the team encountered an "IT configuration problem" with the MR03.