Lewis Hamilton ended the third day of Formula 1 testing in Bahrain on top of the timesheets for Mercedes, while Red Bull was forced to finish its running early

The 2008 world champion took up a commanding position at the head of the field after a series of short runs in the morning, as Mercedes worked on what it called "different set-ups".

Hamilton spent a long time in the garage in the middle of the afternoon, before returning to the action with little more than half an hour remaining and adding another 22 laps to his total.

For most of the day nobody got within three seconds of Hamilton's best, with Jenson Button leading the following pack.

The Briton was briefly knocked back to third by Esteban Gutierrez around lunchtime, before he put in a lap time 0.7 seconds adrift of Hamilton during a busy afternoon where he completed a mammoth 75 laps in the MP4-29.

One car that was rarely seen on track in the afternoon was Red Bull's RB10 with Daniel Ricciardo.

The Australian, following on from a day where team-mate Sebastian Vettel managed 59 laps, had to make do with a total of 28 for the day - and just five in the afternoon - before Red Bull called time on its activities around 30 minutes before the track was closed.

The team's race engineer co-ordinator Andy Damerum revealed that a mechanical problem was found on the car while set-up changes were being carried out, and the issue required the crew to dismantle the RB10 so it could be fixed for the final day of running on Saturday. 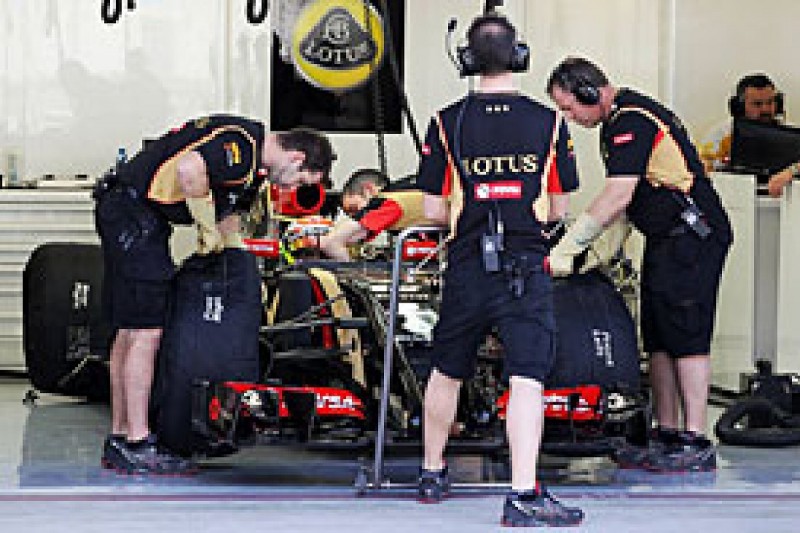 Lotus also had another troublesome day, as Pastor Maldonado twice caused red flags after making a promising start in terms of mileage in the morning.

Before the car hit trouble, Lotus did at least become only the second Renault-powered team (after Caterham) to set a lap time under 1m40s this week. A late effort from Daniil Kvyat helped Toro Rosso join that club as well.

Ferrari also had a tricky day, with Kimi Raikkonen losing a lot of track time during the middle of the test while it solved a telemetry issue.

Elsewhere in the field, Williams spent most of its time focusing on pitstop practice, as it gave drivers Valtteri Bottas and Felipe Massa half a day of running each.

Marussia decided to perform an engine change after Max Chilton was forced to stop with just four laps on the board early in the day, but the team was unable to get it completed before the end of the session.

Its perennial rival Caterham had another good day in terms of mileage, as Marcus Ericsson's 98 laps helped contribute towards him becoming eligible for a superlicence.

Rivals will catch up with Mercedes F1 engines, according to Perez