The 21-year-old was the class of the field throughout qualifying, setting two laps good enough for pole position in Q3.

Leclerc took provisional pole position with a time of 1m03.208s on his first run, then set the fastest times of all in the second and third sectors to improve to a 1m03.003s on his final lap.

Mercedes driver Lewis Hamilton, who complained of not being strong enough on the straights, moved from fourth to second on his final lap - ending up 0.259 seconds slower.

Hamilton will also be investigated after the session for potentially impeding Kimi Raikkonen at Turn 3 during Q1.

Max Verstappen was third fastest, 0.436s down, ahead of the second Mercedes of Valtteri Bottas.

Both Mercedes drivers and Verstappen will start the race on medium-compound Pirellis having used those tyres to set their Q2 times, with the rest of the top 10 using softs.

Red Bull team principal Christian Horner explained the decision to use mediums, which he believes will be the best race strategy for his team.

"That soft won't have the range and that puts a lot of stress on that last [stint] tyre," said Horner.

"Ferrari generate their lap time differently, they go slower round the corners and faster down the straights, so they might feel confident that they can make that work because they don't put as much heat into the tyres in the corners." 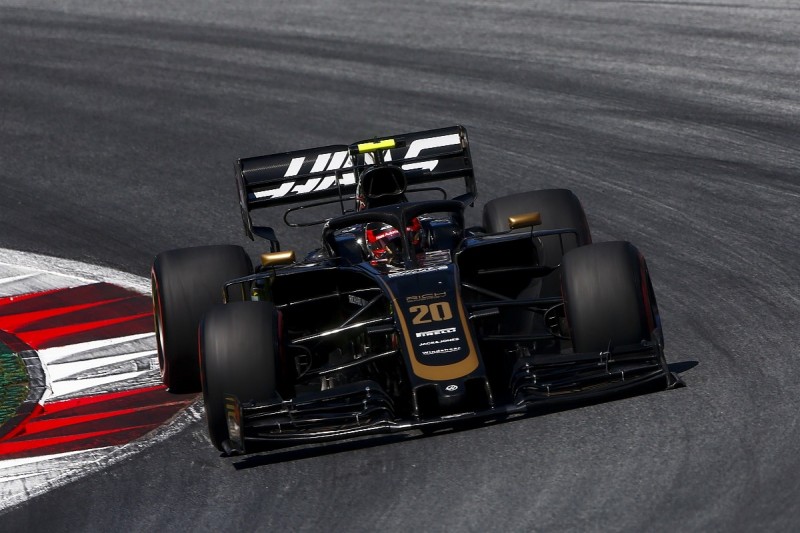 Kevin Magnussen, who made Q3 despite locking up and running into the gravel at Turn 4 on his final Q2 lap, was fifth fastest - three-hundredths faster than the McLaren of Lando Norris.

But the Haas driver has a five-place grid penalty for a gearbox change, so will lose his third-row starting spot.

Alfa Romeo duo Raikkonen and Antonio Giovinazzi were seventh and eighth, while Pierre Gasly was only ninth in the second Red Bull after failing to improve on his second Q3 run.

Vettel was unable to take to the track in Q3 thanks to what Ferrari called a problem with the air pressure line to the engine, meaning he ended up 10th.

Romain Grosjean was 11th after lapping 0.024s slower than Haas team-mate Magnussen in Q2. Grosjean set two lap times separated by just one-thousandth of a second on his second run, but neither was enough to overhaul Magnussen.

Renault driver Nico Hulkenberg failed to improve on his second run in Q2 and ended up 11th thanks to being in the queue of cars slower by Magnussen's Turn 4 off.

Hulkenberg also has a five-place grid penalty for an engine change.

Toro Rosso driver Alex Albon was 13th fastest, but has to serve a back-of-the-grid penalty thanks to taking the 'Spec 3' Honda V6 and latest turbocharger.

Daniel Ricciardo only had one run in Q2 and ended up 14th, ahead of the McLaren of Carlos Sainz Jr.

Sainz did not set a serious time in Q2 as he also has a back-of-the-grid penalty thanks to engine-component changes caused by switching to the 'spec B' Renault V6.

Sergio Perez was the fastest of those eliminated in Q1 after jumping Racing Point team-mate Lance Stroll at the end of Q1.

Perez lapped 0.043s faster than Stroll, who had briefly lifted himself out of the dropzone in the final minutes of Q1 before being shuffled back as others improved.

Toro Rosso driver Daniil Kvyat was 18th, half-a-second slower than Stroll, after traffic ruined what should have been his best lap.

Kvyat turned into Turn 9 and encountered George Russell - who was slow ahead of starting a lap and behind a queue of cars that included Albon - forcing him to run very wide as he passed.

The stewards will investigate the incident after the session, with Kvyat saying "I almost killed someone" over the radio after having to avoid the queue of cars.

Russell was fastest of the two Williams drivers, three-tenths ahead of team-mate Robert Kubica, although both will move off the back row thanks to penalties for Albon and Sainz.