Lewis Hamilton was convinced he had blown Austrian Grand Prix pole with his qualifying spin, before his Mercedes Formula 1 team-mate Nico Rosberg also went off

In an unusual end to F1 qualifying at the Red Bull Ring, the Mercedes pair held their front row positions despite Hamilton spinning at Turn 1 and Rosberg slewing off into the gravel at Turn 9 on their final laps.

Hamilton, who also spun during Q3 in Austria last year, thought his error would cost him pole.

"Naturally I was thinking I'd probably lost it there," he said. "I'm grateful I had one decent Q3 run.

"I don't know what happened, I locked the rears and snapped it round.

"It is similar to what happened in Turn 2 here [last year].

"I do it quite often, not quite sure why - maybe I've got big feet!"

The pair had previously twice swapped the top spot during their first Q3 runs, with Hamilton overcoming Rosberg's initial advantage.

Rosberg drew level with Hamilton's provisional pole time through the middle sector on the lap that ended in the gravel.

"I went on the Astroturf at the second-last corner, maybe that was still a bit wet or something or maybe I overdid it - I just lost it," he said. "I felt really gutted.

"Lewis was two tenths quicker than my [previous] laptime, and I was exactly two tenths up at that point, so I knew I had to go for it as it was very close.

"I had to take more risks and overdid it."

Rosberg said he had not been told about Hamilton's error, but he added it would have been irrelevant as he was pushing to beat his team-mate's existing lap anyway.

"It didn't make a difference, because his [previous] time was two tenths quicker," said Rosberg.

"Anyway, it is a distraction if someone tells me." 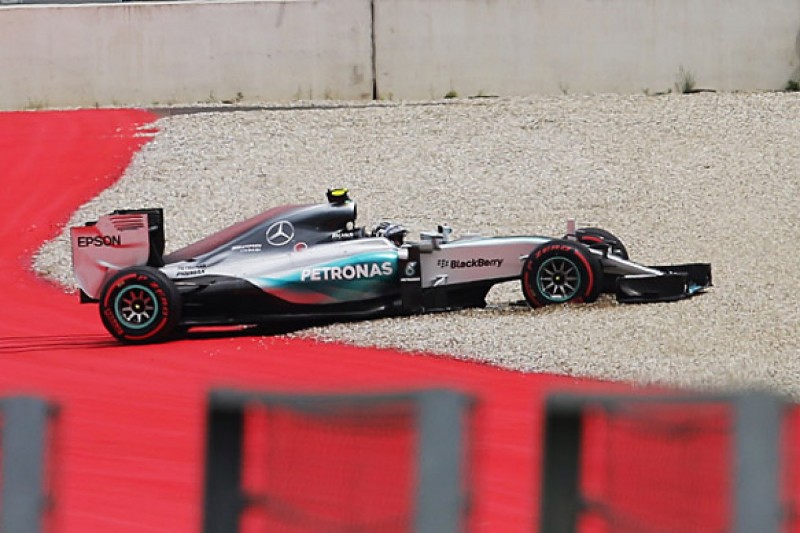