Alpine and AlphaTauri arrived in Interlagos equal on points in the constructors' championship, both having scored 106 points in their fight for fifth place.

The French squad appeared to focus on controlling Gasly during the race, and Ocon asked on the radio to get Alonso to help him keep Gasly behind by staying within DRS distance.

Having pitted later than Ocon, Alonso had stronger race pace later on and the team instructed Ocon to exchange positions in order to try to pressure Gasly.

Eventually the AlphaTauri driver found a way past both rivals to finish in seventh position ahead of the Alpine duo.

Ocon, whose team-mate Alonso gave him back the position later in the race, conceded the tactics pushed team cooperation to ultimate limit.

"It was fun and, yeah, we pushed it to the limit," said Ocon. "So what happened is that we switched position with Fernando once.

"Then Fernando was in front and Gasly caught up to us, and then I said in the radio, 'would be good if Fernando could give me the DRS', to try and keep Gasly, and he reacted straightaway.

"He did, changed his line into the last corner, so I take the inside, not have the dirty air and then be close to him on the exit.

"Basically we managed to keep Gasly behind for three or four laps and he would have passed us straightaway if we didn't do any tactics like that.

"It was hard, but fair. I think we've shown how strong the team spirit is and how ready we are to take that fight until the end," he added. 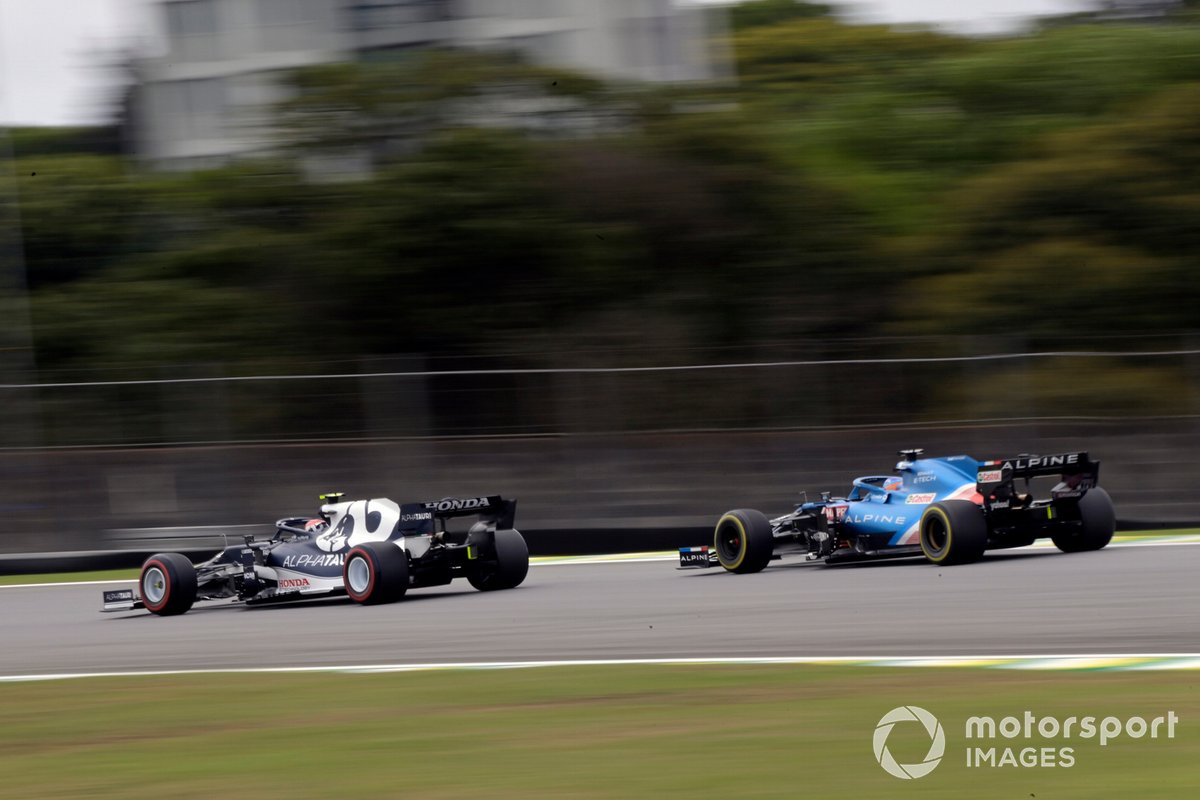 Asked if he thought the tactics could have left Gasly unhappy, Ocon said: "We pushed it to the limit, but that's the only chance we have to beat them in the constructors'.

"It's been not enough unfortunately for us to stay in front, but we keep the championship tied one more time. And that's good."

Despite being beaten by Gasly, the Interlagos results allowed Alpine to stay level on points with AlphaTauri thanks to the double-points finish.

Although Alonso appeared to have superior pace than Ocon, the Spaniard said he never considered fighting his team-mate for position instead of getting the team to ask for the exchange.

"You will never attack your team-mate, probably, because you have to run very close to the other car and you will damage the tyres, so you don't want to put that situation," Alonso said.

"And maybe at the beginning of the year you may try, but now we want to score points with both cars.

"That's our main strength as a team, we are fighting with a very fast AlphaTauri, but they have one car, and we have two cars. So we cannot do anything with ourselves."