Mercedes Formula 1 team technical director James Allison says getting the tyres "singing" is the biggest challenge when going to an unknown venue, such as the Algarve circuit last weekend

Allison conceded that it was "pretty dicey" for Mercedes drivers Lewis Hamilton and Valtteri Bottas at the start of Portuguese Grand Prix, as the pair struggled for grip and were passed by McLaren's Carlos Sainz Jr.

Speaking in a Mercedes video ahead of F1's first visit to Imola since 2006, Allison admitted that the unfamiliar circuits added to the schedule this year have provided an extra challenge.

"Going to a new track increases the workload and it does add a layer of uncertainty to us," he said.

"Because we don't have a long check list of all the things that might have gone wrong at that track in the past, and we don't have detailed knowledge of the way in which the car is going to behave, but we have pretty good simulation tools.

"As long as we know what the asphalt looks like, how rough it is and the layout of the kerbs and the racing line, we can get a pretty good estimate of what we need to go quickly at that track.

"And like any track really, a new circuit or one we are very used to, the biggest challenge, the biggest thing that makes a difference to whether it is a good weekend or bad weekend, is whether or not we can get the tyres really singing for us.

"If we can get them working happily in their working range front and rear axle, and the car nicely balanced, we are going to have a good weekend." 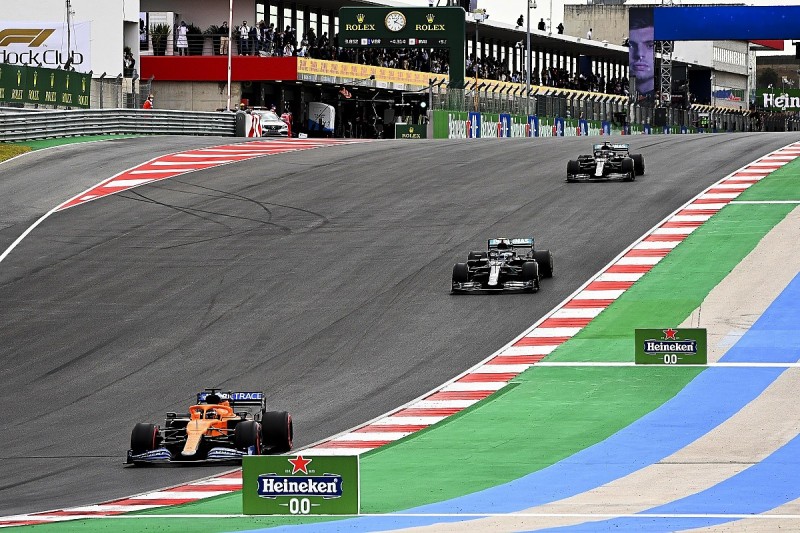 The tyre issue proved complicated in Portugal, where both Mercedes drivers started on the medium tyre and struggled in the cold conditions at the start, not helped by a light sprinkling of rain.

"It was a result of probably several factors building up to produce a situation where a car that had been decently on pole was suddenly then being bothered on all sides by marauding folk from behind," said Allison. "All of it had its root in the fact that our tyres were too cold.

"The downside of going with that medium tyre is that it's going to be harder to make it wake up and work nicely when the track is cold.

"Most of the people behind us were on the soft tyre. So, straight away they had a rubber that was going to be able to get going quicker and wake up more quickly on a very cold track.

Allison added that having to wait longer on the grid for the cars to form up also affected both Mercedes drivers.

"When they form up on the grid ahead of the start, as soon as they stop that tyre is cooling down and the people in pole position and on the front rows of the grid sit there for many, many seconds while the back end of the grid is still forming," he said.

"So, the people at the back end of the grid still have warm tyres, and that warmth gradually drops off as you get nearer to the front.

"We are on the medium rubber, which gives us a disadvantage straight away in this cold, wettish weather, and then behind us we have cars that are still warmer because they have been standing still for less time.

"All those things contributed to make it so that at the beginning of that race, it was pretty dicey for a while."

Ocon: Working with Renault now best it's been since F1 return