Mercedes Formula 1 boss Toto Wolff says that James Allison has made it clear that he doesn't want to one day be the team principal at the Brackley outfit.

It was announced last week that as of 1 July, Mercedes technical director Allison will hold a newly created position of chief technical officer, a change that some observers interpreted as a possible first step to the former Lotus and Ferrari engineer eventually being the overall head of the team.

Wolff retains the team principal job for the foreseeable future, having explored his options over the past year. The Austrian has made it clear that he will eventually move aside, but speaking on Saturday after qualifying for the Emilia Romagna Grand Prix, he stressed that the job won't go to Allison.

"I would say if you look at things, he would absolutely be capable to be the team principal," Wolff said of Allison. "And also the people here, there's so much respect [for him] within the organisation.

"But the thing is very easy. He said, 'Never, ever I would do this. Team principal requires different skills.' And so he said, 'No, thank you.'"

"James and I speak multiple times every single day. And we're totally coordinated on the strategic direction of Mercedes Motorsport, and Mercedes Grand Prix.

"So much earlier than before we decided the CTO role - it must have been a year or two ago - we discussed the future of the team principal role in Mercedes.

"And he made it very clear that that was not for him. And since then, obviously I am thinking and I'm looking and I'm observing, what is happening out there, and who's doing a good job. So finally, I can step back from this madness!" 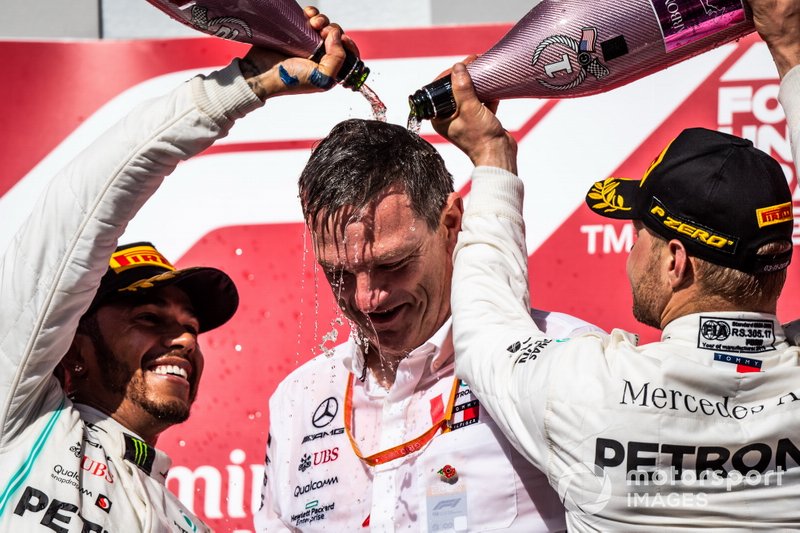 Lewis Hamilton, Valtteri Bottas, pour Champagne over James Allison at the 2019 US GP

Wolff stressed that Allison is the ideal man for the new CTO role, and that Mike Elliott – his replacement as technical director – will also be a good fit.

"James obviously is a huge asset to the team, not only as a brilliant engineer, but also as a leader," said Wolff. "And he has a good understanding and overview of what is happening in F1 beyond the technical space.

"He is a sparring partner of mine when it comes down to strategic discussions, political discussions, and he is getting more involved also with the other departments and racing programmes that we have.

"And that's why it was almost a logical step to make my technical twin brother, I'm also the head of Mercedes Motorsport. And so it makes sense to have a technical director for all motorsports programmes.

"On the other side, Mike Elliott, just about joined with me, he came from Renault and was the head of aero there. And I have had such a great relationship with him over all these years.

"He's a hugely competent, intelligent and intellectual engineer, someone who has been a fundamental pillar in the team's success and recognised from the whole organisation.

"That's why I'm really happy that he's become the technical director. But having said that, there we have such a solid group that he's one of a group that will lead the team in the future."