Romain Grosjean says it is "almost like everyone's going to have a B-car" at the Spanish Grand Prix, as his Haas Formula 1 team readies a major upgrade package

The first non-flyaway race of the season is traditionally when teams bring significant updates, although it has become more common for those with greater resources to roll out new parts across the opening rounds.

Haas is usually strong at Barcelona and hopes that this form - combined with a new front wing, floor and other bodywork changes - helps it recover from a difficult start to the season in which its performance has been hampered by tyre problems.

Grosjean believes comparisons to how Haas's 2019 car performance in pre-season testing at the Spanish track will also help address those weaknesses, but said the early-season pecking order may shift anyway.

"So it's almost like everyone's going to have a B-car, therefore the standings could be a bit different.

"It's important that our updates go in the right direction.

"We know what we can do there [at Barcelona]. We'll see if we can repeat that and understand where our race pace has gone."

Several teams have struggled to get Pirelli's thinner-gauge 2019 tyres into an optimal working window this season.

Haas seems to struggle with tyre graining more than others, but independently of its "big" upgrade Grosjean does not think tyre performance will be an issue in Spain.

"It's a track with high energy, so I'm not too worried about getting the tyres to work, in theory," he said.

"It's interesting, as we definitely got them to work in winter testing. 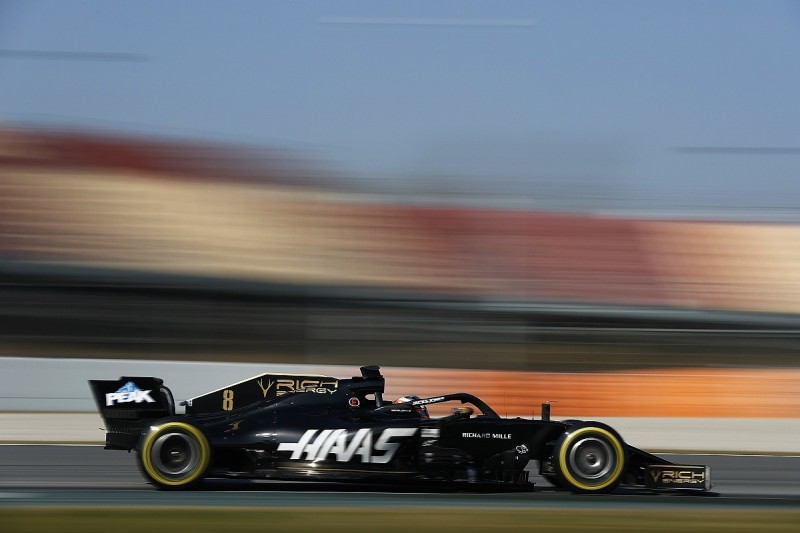 "Going back there and seeing if we can still get them to work will be a good test, because we know the car should be fast there."

After Haas had been off the pace throughout the Azerbaijan GP weekend, Grosjean argued that the car was still the midfield benchmark on raw pace - when the team could get it to perform.

"The baseline of the car is still the best in the midfield, to be fair," he said.

"I believe downforce and so on is there, but if you can't get the tyres to work, whatever you have it doesn't seem to be working.

"I don't think it's [a lack of] downforce because I believe we have more downforce than some other cars in the midfield, and they can run the tyres, so it has to be somewhere else."

Renault has been Haas's main rival at the head of the midfield across 2018 and the early races of this season, but it also struggled in Azerbaijan.

It and Haas are now seventh and eighth in the constructors' standings, trailing the likes of McLaren, Racing Point and Alfa Romeo.

Haas team principal Gunther Steiner said: "It's still very close in the midfield because everybody is suffering the same problem one day or another.

"There is nobody completely in control of what we need to do."