McLaren Formula 1 team boss Andreas Seidl says it is no surprise that Ferrari has closed in on the constructors' championship battle for third following its strong result in Turkey.

Sebastian Vettel and Charles Leclerc finished third and fourth in the rain-affected Istanbul race, logging 27 points between them - by far the biggest single race score for the Maranello outfit this year.

With three races to go Racing Point currently holds third place on 154 points, ahead of McLaren on 149, Renault on 136, and Ferrari on 130.

After a poor qualifying session in Turkey McLaren limited the damage with a recovery to fifth and eighth places for Carlos Sainz and Lando Norris.

Seidl feels that Ferrari is well and truly in the hunt to swoop for third in the championship, feeling that McLaren does not have the "third or fourth quickest" car within that battle.

"It was obviously great for us to score this result because it kept us in the fight for the constructors' championship," he said when asked by Autosport about the contest for third.

"Which is good, but we definitely do not have I would say the third or fourth quickest car at the moment in this battle.

"And with what we've seen also from Ferrari, one more good result and suddenly it's a fight between four teams for this P3, P4, P5, P6."

Seidl added that it is no surprise that Ferrari is on the cusp of joining the battle contested all season by McLaren, Renault and Racing Point, and that the team is not to be underestimated. 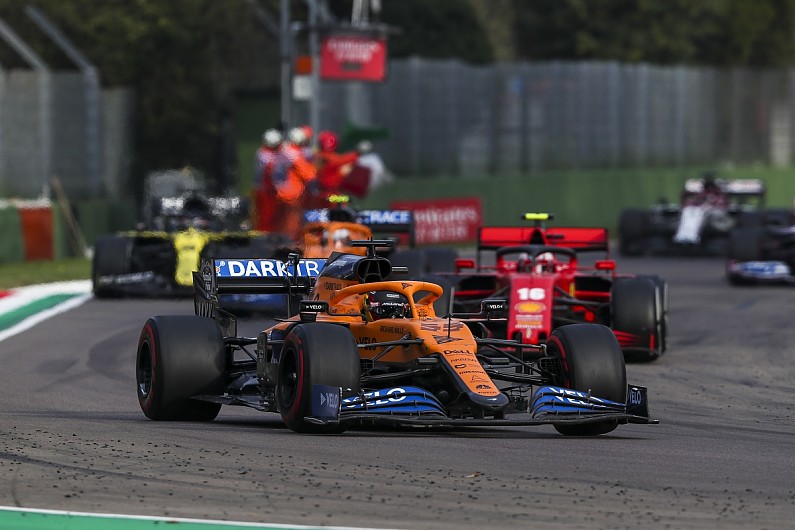 "I know what a team like Ferrari with all the resources they are having can do, and it's not a surprise that they are coming back during the season.

"So we never underestimated this power that Ferrari has. They have two great drivers, and obviously a great team. So that's the reality we're in.

"We have a competitive car, which is aggressive compared to last year, we have now I don't know how many points, probably after this number of races already more than last year, which shows again that we made a great step forward with the team.

"But at the same time, we have very strong competitors. And we just hope we can keep this battle alive until the last race, and we will give it all as a team.

With team spirit high at McLaren, continuing its path of recovery after a few difficult seasons, Seidl says that the team is motivated and must focus on itself to find further performance.

"I see how committed everyone is inside the team, how great the spirit is in the garage and back home," he said. "It's important now on our side to focus on ourselves.

"We can still extract more performance out of the car, especially on Saturdays also. It's important to keep the level of reliability up.

"Then it will be important to have clean race weekends, optimise the operation as well out here in terms of strategy, in terms of pit stops.

"And together with our two good drivers, I think we can keep this battle alive."