Verstappen reported a loss of power on his Red Bull car during his first run on the medium tyres in Q2, forcing him to return to the pits for repairs.

Red Bull reported that it was a suspected spark plug failure that had caused the loss of power, but the mechanics were able to complete the repairs in time to get Verstappen back out before the end of the session.

Verstappen made it through to Q3 on the medium tyres, but struggled to match the Mercedes drivers for pace in the final stage of qualifying, finishing half a second off pole-sitter Valtteri Bottas's lap time in third place.

Verstappen felt the loss of running in Q2 led to his struggles in Q3 as he lacked rhythm in the final stages of qualifying.

"I don't know exactly what it was," Verstappen said of the issue.

"The bodywork had to go off, and the mechanics did a very good job to fix my car. But it basically ruined my qualifying, because you have to go out on the medium, and try to nail the lap.

"We managed to get through on that, but the reference was a bit off. The first lap then in Q3, the tyres were too cold because I was in the middle of the train. I never really got into a nice rhythm where you know I've got a bit of time left there, I can push a bit harder. It was a bit messy. 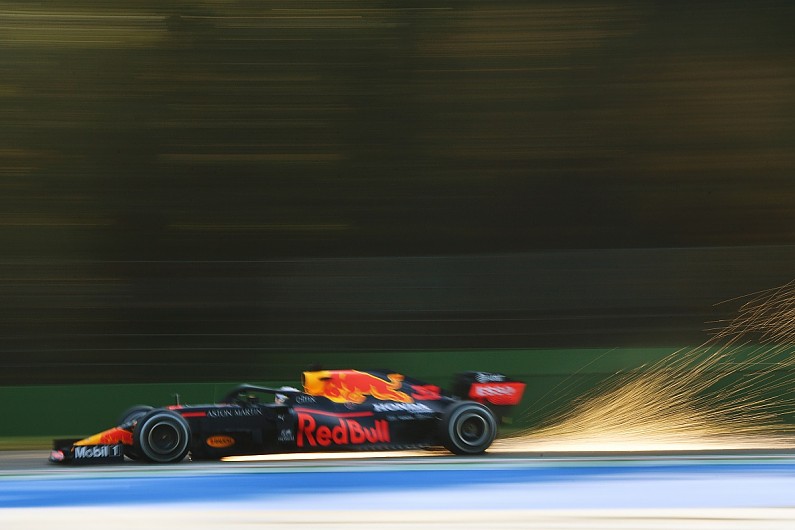 "Even in Q3, the last lap, I was like well, I think we could have done quite a bit better here if we'd just had a smoother qualifying. But if you have that in Q2, and then you have to qualify on a different tyre as well midway through, it's not great.

"I didn't expect of course to beat [Mercedes] in qualifying, but I wanted to be a bit closer and make it a bit more exciting.

"Today it was just very tricky, and I never really found that rhythm throughout qualifying where you know you can put a new tyre set on and know where to find lap time.

Verstappen was initially told to keep going when he reported the loss of power, but dived into the pits at the end of an attempted push lap so the issue could be fixed.

"I had power, then not, then it kicked in again, then not," Verstappen explained.

"They told me keep going but I said, 'guys, I'm losing quite a bit of lap time here on the straight'.

"At one point I aborted because it didn't make sense to continue. We'll have a more detailed look what exactly went wrong. It's not so lovely, but luckily we're still here."

Verstappen was hopeful that Red Bull's race pace would give him a chance to challenge Mercedes, but feared it would be difficult to overtake due to the narrow nature of the track at Imola.

"The long run was alright, so hopefully it will be a bit similar tomorrow," Verstappen said.

"Let's hope that top-speed wise, we are in a good position tomorrow.

"I don't think it's going to be very easy to pass anyway, but we'll see what we can do."