© 2020 Autosport.  All rights reserved.
Previous / Vettel trusts Ferrari giving him same car as Leclerc
Next / Why do Verstappen's offensive comments get a free pass?

Felipe Massa says Michael Schumacher was the harder worker, but Lewis Hamilton has the edge on talent, when the two Formula 1 greats are compared.

Massa, an 11-time grand prix winner, has seen both up close having worked alongside Schumacher as part of the Ferrari system, including a season as team-mates in 2006.

Hamilton, meanwhile, was a close rival of Massa's for a number of years, including their spectacular showdown for the world championship in 2008.

While conceding the best basis for comparison would be if he'd been team-mates with both drivers, Massa feels he still has insight into how they stack up.

Speaking to the In the Fast Lane podcast, Massa said Schumacher's worth ethic, in terms of fitness and car set-up, was second to none - but that Hamilton is probably the more naturally talented of the two.

"It's very difficult to compare," he said. "I didn't race with Lewis in the same team. You really need to race with both of them in the same car, understanding the data, to compare one with the other.

"But both are completely amazing and talented and different, and complete drivers in so many areas. 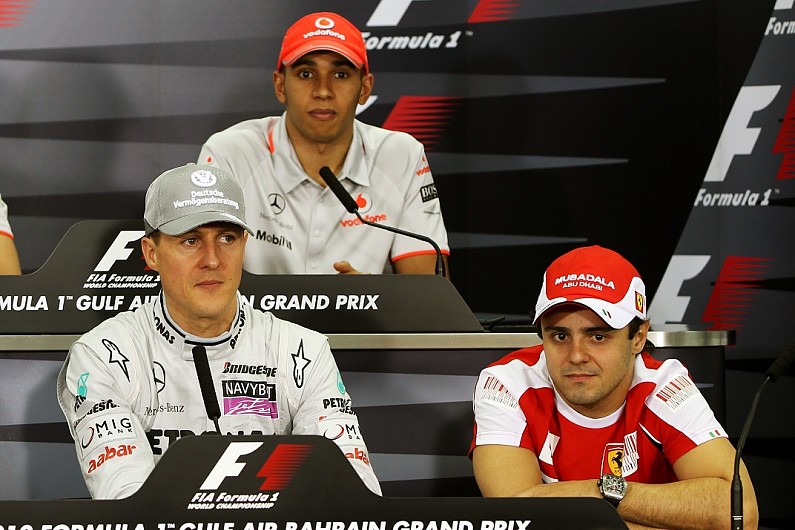 "But the talent and pace alone...

Massa added Hamilton's raw ability was evident from when he first arrived in Formula 1 in 2007, and fought for the title despite being matched up against a two-time world champion in Fernando Alonso at McLaren.

"It was clear that Lewis was a very talented driver since he started," said Massa.

"He didn't win [the title] in 2007 because he had some mistakes, maybe some experience was missing in some races. I remember in China he crashed going into the pitstop, he just stopped in the run-off area. In the end he didn't win the championship because of some mistakes, and also the fight he had with Alonso in the same team.

"In the end his numbers are showing his capacity, what he's able to do. The numbers keep showing, because he will beat all the records in Formula 1, victories and maybe this year he will already be the same number of titles as Michael Schumacher - which is something that is unbelievable."

Share this article on Facebook Twitter LinkedIn Email
Previous / Vettel trusts Ferrari giving him same car as Leclerc
Next / Why do Verstappen's offensive comments get a free pass?
© 2020 Autosport