Max Verstappen believes the switch of R&D resources from the 2020 to the 2021 car adopted by Mercedes won't work for his own Red Bull Formula 1 team.

Mercedes boss Toto Wolff said at the recent Eifel GP the Brackley outfit had switched off development for 2020 to focus on next year's model.

That appeared to be reflected at the Nurburgring, where Red Bull brought new parts and the two teams were closer in outright pace.

Wolff said Mercedes had made a "thoroughly thought through decision" to switch to 2021 development because of major changes to the package.

The chassis and most mechanical parts are fixed for next season under the rules agreed earlier this year when the new technical regulations were postponed to 2022.

However, the token system allows teams to upgrade some mechanical parts, while aerodynamic development is free, and there is also a package of aero rule changes designed to trim downforce. Mercedes also has to factor in next year's ban on DAS.

Verstappen says that in contrast to its main rival, Red Bull will carry on developing the RB16 within 2020, given the scope of the technology that will carry over to next season.

"From our side, I think it's more important that we just keep learning about this car, because we can't really change a lot for next year," said the Dutchman.

"Whatever we do now and learn on the car we have now will also be better for us next year, and whatever Mercedes does, for sure will work for them, but maybe doesn't work for us. So we just keep on pushing. And we'll find out of course next year where we all stand." 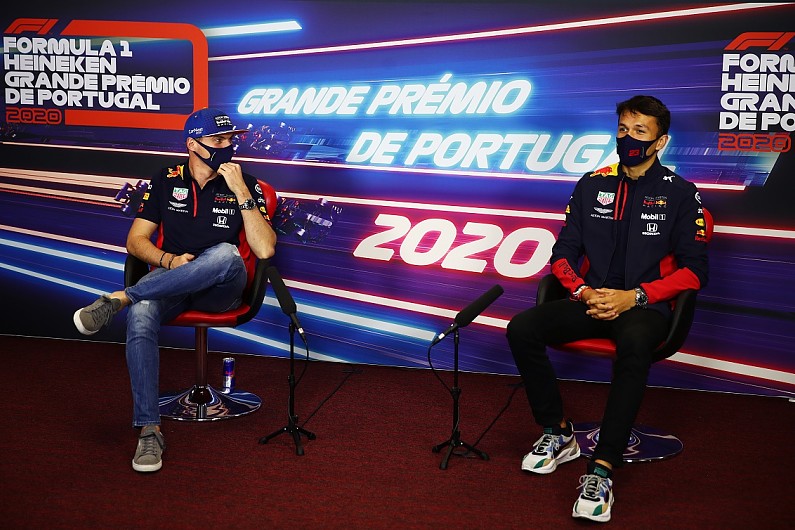 Verstappen downplayed the significance of the smaller performance gap to Mercedes at the Nurburgring, while acknowledging that the car felt better.

"I don't know, it was very cold there, and a track where we haven't been in a long time. Again, here is a track we haven't been to. So we'll have to look again how competitive we're going to be," he said.

"But balance-wise, I think the car felt a little bit more connected, which is, of course, always a nice feeling."

"Already the updates from Nurburgring showed that the car's going the right way," said the British-Thai driver.

"And as Max said, the rules don't really change going into next year. So we'll just keep on working at it. That will only make the car feel better for next year, too."

Albon believes his personal form has been improving of late, and he added that the team has been working on improving race starts.

"I think actually on paper my qualifying has been improving through the year," he said. "The races actually haven't been too bad, just as a team, but also we're just working out the starts a bit better. The Renaults and Ferraris seem to get off the line really well. So it's always been a little bit of a catch up.

"And of course a mistake in Nurburgring where I locked up most probably stopped the whole strategy for the race.

"But as I said things are going in the right way. Just need to firstly get off the line a bit better, but also just have cleaner races, and I'm sure we will get the results."