Aston Martin is set to adopt the classic British racing green colours for its Formula 1 car livery in 2021 upon the brand's works return to the grid.

The existing Racing Point squad will rebrand as Aston Martin for 2021 after team owner Lawrence Stroll invested in the British manufacturer earlier this year.

Ambitions for the Aston Martin F1 project have seen it sign four-time world champion Sebastian Vettel for 2021 on a multi-year deal, as well as increase its workforce by 20% and push on with plans to construct a new factory.

Aston Martin traditionally raced in British racing green - a colour that originated when teams raced in national colours in the early days of motorsport - through its first forays into motorsport, and during its brief F1 entry in 1959 and 1960.

The manufacturer switched to a luminous green colour for its Aston Martin Racing sportscar efforts in the FIA World Endurance Championship in 2018, and used the scheme most recently for its GTE-Pro class victory at the 24 Hours of Le Mans last weekend.

However, the Aston Martin F1 project is set to run in British racing green next year, as revealed by Lance Stroll during Thursday's FIA press conference in Sochi ahead of the Russian Grand Prix.

"I believe it will be British racing green," Stroll said, adding that the design "will be pretty cool." 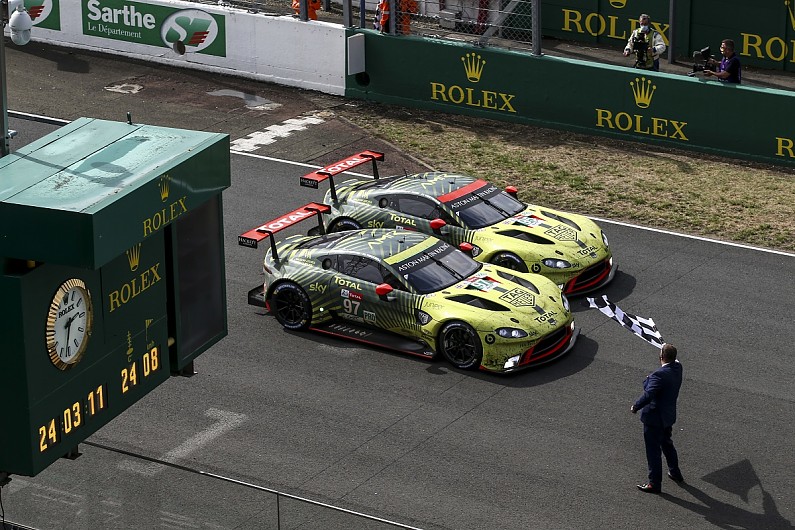 Autosport understands that initial design concepts have already been reviewed by the existing Racing Point bosses for the Aston Martin rebrand that incorporate the British racing green colours.

But the colour scheme is also set to retain the bright pink colour of existing title sponsor BWT, which has been the base livery of the car for the team since 2017.

Initial design concepts that were recently reviewed are understood to have been rejected as they did not feature enough pink.

Plans are continuing to progress for the team's Aston Martin rebrand in 2021, with the signing of Vettel, who leaves Ferrari at the end of the season, being announced earlier this month.

Stroll said he is yet to sit down and formally discuss plans with Vettel for their time as team-mates, but moved to welcome the German driver to the team.

"I just knocked on his motorhome in Mugello and shook his hand, welcoming him to the team," Stroll said.