Carlos Sainz Jr and Lando Norris say that wind sensitivity was the cause of McLaren's drop in form between Monza and Mugello's Formula 1 rounds.

After the pair qualified third and sixth for the Italian GP they slipped back to 10th and 11th on the grid for the Tuscan GP, with Sainz labelling the change in fortunes a "nasty surprise".

Norris's preparations were unsettled by a crash on Friday, in which he damaged the front of the car and lose valuable track time.

"I think this is not going to be the last time where we see these kind of performance swings between teams from track to track," said Sainz.

"On paper, we thought this track was gonna be good for us.

"Before going into this weekend we thought these kinds of corners were going to suit us, but the midfield of F1 always has surprises for you.

"And this has been a nasty surprise, but I think we kept our heads down and we managed to improve the car quite a lot going into qualifying."

Both drivers explained that windy conditions at Mugello highlighted an inherent problem in the car.

"It's been the same case since 2019 when I arrived to McLaren that we felt like our car is very sensitive to tailwind corners mainly," said Sainz.

"And it's very good in headwind corners. So both sides of the thing.

"Once you get in a tow, what you have is a lot more tailwind, you basically have tailwind in every corner.

"That's why in places like Monza we were talking about trying not to go in the tow of some of our competitors. 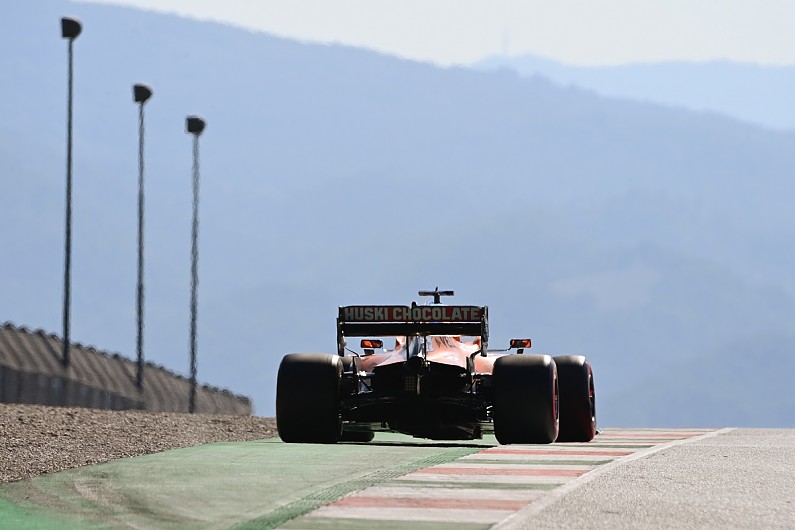 "It's something we are investigating and trying to understand: why is this causing these kinds of effects, and why are we suffering a bit more?"

Norris said that the track surface also played a part in the team's struggles to come to terms with Mugello.

"It's the wind and Tarmac," said Norris. "I think those two factors.

"Mainly wind; it's one of our weaknesses with wind, and there's been quite a bit of wind the last two days.

"And that's been probably one of the biggest factors in our struggles, in the mistakes and so on.

"The car's been just very unpredictable, changing lap on lap, not knowing really where the limit is.

"And as soon as you go over it, it proves quite costly, like it did yesterday.

"I think it's the same for different teams.

"You've got Red Bull, who went from not looking anything great in Monza to being you three-tenths off a Mercedes, which no one was really going to be expecting.

"So I think everyone is just finding it hard to understand. I think tyres work differently for different teams.

"And I think there were just a lot of unknowns still for us, and probably for other teams on these different characteristics such as track surface, wind, kerbs, everything like that."

McLaren team boss Andreas Seidl added that the team has been working on the wind sensitivity issue.

"It's definitely something we are aware of, about this weakness of this car since last year, as Carlos said," said Seidl.

"And that's something that James [Key] together with his aero department is putting a lot of effort into, simply trying to reduce this sensitivity by continuous developments we bring to the to car."