© 2020 Autosport.  All rights reserved.
Previous / Seidl: No impact on F1 operation if Woking factory sold
Next / Vettel: No regrets over my time with Ferrari

Alex Albon insists Pierre Gasly's Italian Grand Prix victory has not put any extra pressure on him to secure his Formula 1 future at the Red Bull team.

Albon finished a frustrated 15th at Monza after a race compromised by floor damage and a five-second time penalty for an early incident with Romain Grosjean.

The Anglo-Thai driver currently has 48 points compared to the 110 of team-mate Max Verstappen, and even before his Italian GP victory Gasly's strong form with AlphaTauri in 2020 led to speculation that he was in a good position to replace Albon should Red Bull decide to make a change.

However he remains adamant that his situation hasn't changed, and the need to perform has always been there.

"No, not at all," said Albon when asked by Autosport if Gasly's win had ramped up the pressure.

"The process stays the same. I think it's been like that since the first race in F1. So on my side, I'm looking at my own recent races and things have been going on the up.

"I'm happy with the way it's going. We've got another weekend to get it together, and focus on the weekend. I do think especially Monza didn't really reflect what was going on.

"But good times will come, and I'm sure when I have the opportunities I'll be showing what I can do." 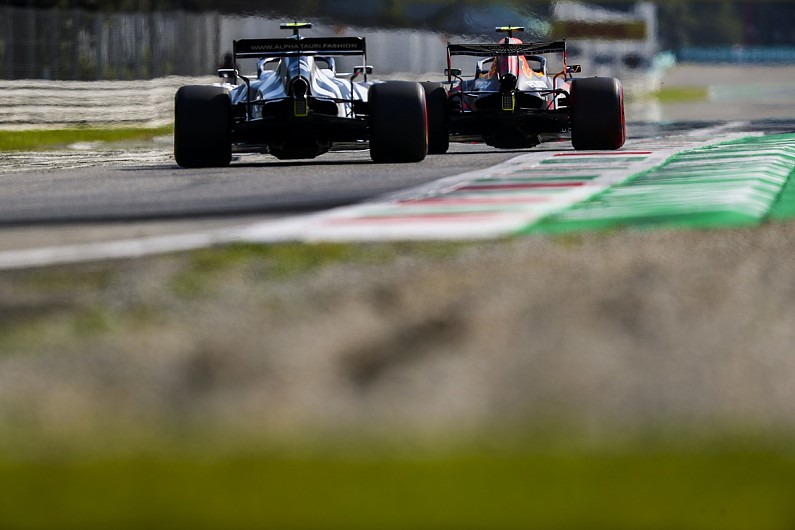 Albon says any pressure he feels is generated by his own desire to do the best job he can, and not because he was promoted to one of the leading teams.

"Joining a top team of course, you yourself you want to do well, because it is an opportunity to win races or get podiums, but in terms of added pressure, the pressure really comes from within," he said.

"It's yourself wanting to do well rather than anything else. That doesn't really change when you change team. It's not really any different, to be honest."

He insisted that the Italian GP weekend was better than it might have appeared: "To be honest even Monza was a pretty positive weekend, really, if you take away Sunday. It's getting better, pace-wise, and I was feeling more comfortable at Monza on top of Spa.

"Of course it didn't quite work Sunday, but I'm trying to take some positives and carry that momentum into this weekend."

Albon also has no regrets about missing out on a podium when the usual pacesetters faltered at Monza.

"You always want to be there, that's for sure. I think especially when you see opportunities like that, when let's say the Mercedes aren't there to win the race, it does obviously make you maybe disappointed that you can optimise that side of it.

"But there were so many cars that were affected by it. So it's not like we were the only ones, there were a few out there who had their race compromised."

Share this article on Facebook Twitter LinkedIn Email
Previous / Seidl: No impact on F1 operation if Woking factory sold
Next / Vettel: No regrets over my time with Ferrari
© 2020 Autosport