© 2020 Autosport.  All rights reserved.
Previous / Leclerc: Ferrari struggles "hurt even more" at Monza
Next / Bottas "not sure how happy Red Bull is" on party modes

Carlos Sainz Jr says he was left "shaking" following his qualifying lap which earned him third place on the grid for the Italian Grand Prix.

The McLaren driver had looked strong throughout qualifying, but nearly threw away all his efforts on his final run in Q3 when he almost lost control of his car at the first Lesmo corner.

Knowing that he needed to make up for the time lost, Sainz risked everything over the remainder of the lap before pulling off a slot on the second row - and the effort left him drained afterwards.

"On the last lap I nearly messed up," explained the Spaniard.

"After that, I had to drive like this [on the edge] and I'm actually shaking a bit because in Parabolica and Ascari I had to really concentrate.

"I was already needing some very strong final few corners and I really went for it.

"I risked a lot and, after the dive I did into Ascari, I was a bit like 'woah, that was way too late!'"

Sainz's performance was a surprise with many having expected Renault and Red Bull to be battling it out as best-of-the-rest behind Mercedes. 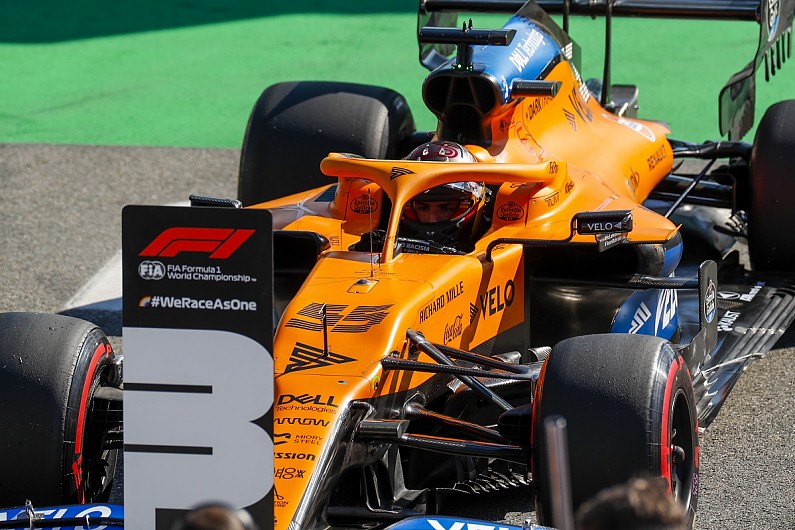 But the team's decision to opt for an ultra low drag solution this weekend appears to have paid dividends, although Sainz is still unsure of the exact reasons why McLaren is so strong at Monza.

"I would like to be able to answer that specifically, but at the moment I can't," he said.

"Honestly, I felt since Q1 we had the upper hand on the rest of the midfield and I just needed to put some clean laps together.

"But yeah, we're running very low downforce which on our car last year didn't work. Our downforce was just falling off whenever we ran very little rear wing.

"This year somehow our car is a bit more robust at running lower downforce levels and in Spa it started to pay off.

Sainz's team-mate Lando Norris qualified sixth, but said he was "annoyed" at his own performance which he felt "wasn't good enough".

Norris lost ground to Sainz through the first chicane and although he gained time back through the Ascari chicane, ended up a little over a tenth behind the Spaniard.

Norris told Sky Sports F1: "Of course it sucks to lose to your team-mate. I'm annoyed about it and every team-mate that loses to their team-mate is.

"It's just over one tenth and I believe I could have gone one tenth quicker for sure. I'm sure he could have done as well.

"It's that annoying thing of always feeling like you could have done a better job. But the job I did today wasn't good enough."

Share this article on Facebook Twitter LinkedIn Email
Previous / Leclerc: Ferrari struggles "hurt even more" at Monza
Next / Bottas "not sure how happy Red Bull is" on party modes
© 2020 Autosport