Carlos Sainz Jr will not start Sunday's Belgian Grand Prix after suffering an exhaust failure on his McLaren Formula 1 car shortly before the race.

Sainz reported that something had "broke" on his McLaren MCL35 car while completing his installation lap to the grid at Spa, saying over team radio there was "smoke coming out of the car".

The Spanish driver returned to the pits and was wheeled back into the McLaren garage as the team got to work to try and resolve the issue ahead of the start of the race.

But McLaren confirmed shortly after Sainz returned to the garage that he had suffered an exhaust failure triggered by a power unit issue, ruling him out of the Belgian GP.

"Carlos' DNS was due to a PU issue that led to exhaust failure, which we will investigate further after the race," a McLaren statement confirmed.

After getting back to the garage, Sainz changed out of his race suit and into the 'End Racism' t-shirt in order to take part in the pre-race ceremonies.

Sainz had been due to start the race from seventh on the grid after recording his best qualifying result at Spa. 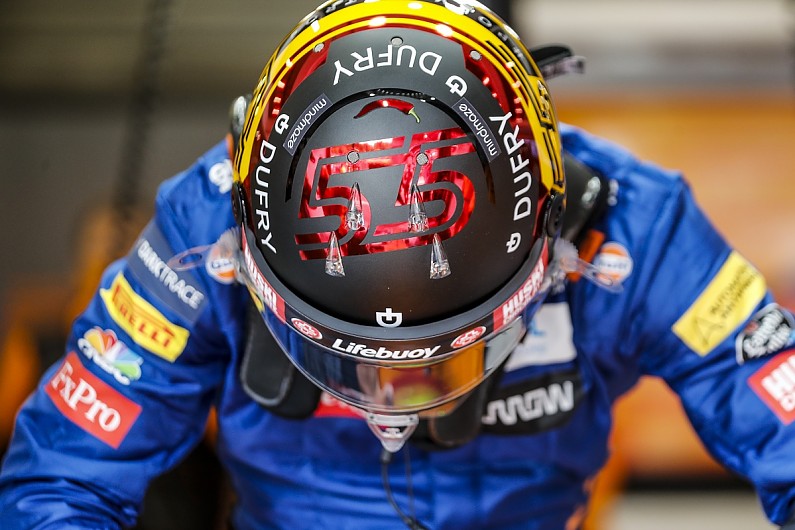 Sainz said on Saturday he believed McLaren was in "a very strong position" for the race, although he believed it would have been "very difficult" for the team to beat the Renault drivers of Daniel Ricciardo and Esteban Ocon ahead.

"We can play a bit around with strategy," Sainz said. "I think it's lower deg than what we expected coming into weekend but it's also much, much cooler than last year.

"Let's see the weather tomorrow. We elected to run super low downforce, which means if the rain comes, we might suffer a bit."

It is the latest setback for Sainz in what has been a difficult season so far, featuring a number of on-car issues, most notably when he suffered a late tyre failure in the British GP.

It also marks the fourth time in six years that Sainz will have failed to see the chequered flag in Belgium.

Sainz has been outscored by McLaren team-mate Lando Norris so far this year, and will head to Monza next weekend for the Italian GP with just one points finish in four rounds.