The race at Spa was processional at the front, with Max Verstappen taking another third for Red Bull, as the drivers trying a contra-pitstop strategy during the safety car provided most of the action in the pack.

At the start, Bottas made a fractionally better getaway compared to his polesitting Mercedes team-mate but was obliged to go to the outside and tuck in closely behind Hamilton as they exited La Source.

Bottas ran very close to the leader but lost momentum going through Eau Rouge and was suddenly under more pressure from Verstappen in third.

But a helpful tow from Hamilton's car meant Bottas was able to stay in front by the time they arrived at Les Combes, where Verstappen suddenly found himself under attack by the fast-starting Daniel Ricciardo. 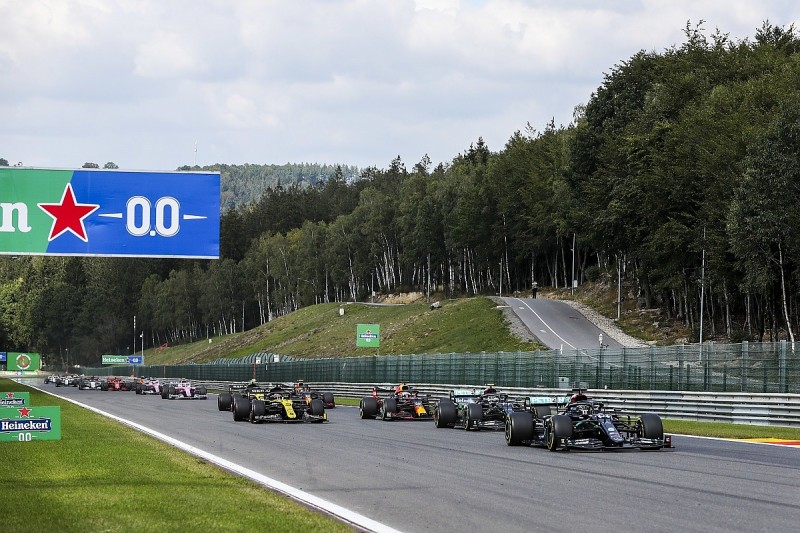 They ran side-by-side through the second part of Les Combes and the downhill Bruxelles hairpin right - with Ricciardo and then Verstappen going right off the track at those two respective points - but the Red Bull was able to stay ahead, while the Mercedes drivers ran clear in the lead.

Hamilton led by 1.4s by the end of the first lap and the gap to Bottas fluctuated slightly across the next few laps.

The Mercedes duo and Verstappen were the only drivers able to run in the 1m50s, with all three on the mediums compared to their rivals on the softs behind, before the two Black Arrows dipped into the 1m49s and the gap to the Red Bull quickly grew to over five seconds behind the leader.

Hamilton's lead stood at 1.8s on lap 10 of 44 when the race was suddenly neutralised following a huge accident for Alfa Romeo's Giovinazzi, who lost the rear of his car all by himself as he exited Turn 13 and smashed into the barriers on the outside.

The following Kimi Raikkonen was able to get by unscathed, but a wheel that had been ripped off the Alfa bounced back onto the track and left Russell with nowhere to go.

The Williams driver struck the wheel and his suspension was broken, with his FW43 then going into the barriers on the left of the track. That prompted the arrival of the safety car as the wreckage was cleared and a large amount of debris was swept clear of the track.

Hamilton, Bottas and Verstappen pitted at the first available opportunity, with Mercedes double-stacking its cars to fit the hards.

This nearly let Verstappen get in front of Bottas as he accelerated away - having taken on his own hards - but the Finn stayed ahead and the order remained as it was before the safety car was called. 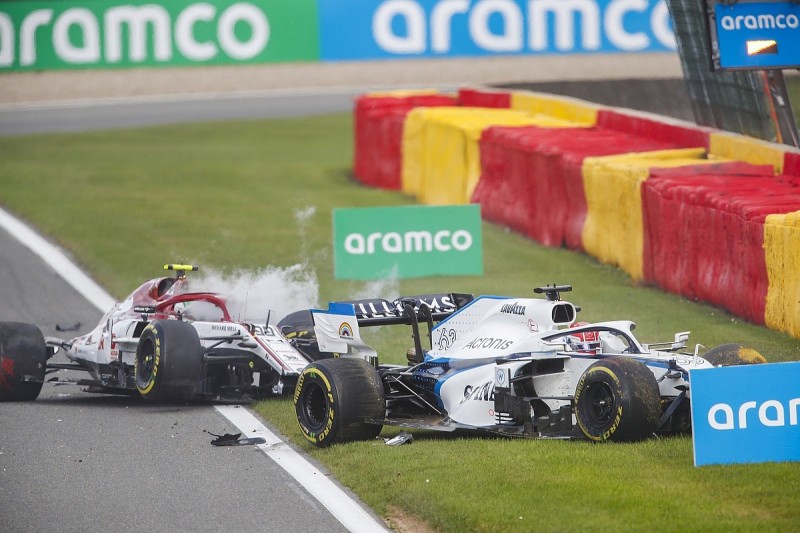 On lap 15 the race restarted, with Hamilton already pulling clear of Bottas after jumping away approaching the Bus Stop chicane on the previous tour.

That meant Bottas had no chance to attack for first place and the race settled down again at the front, with Hamilton quickly re-establishing his lead as again the top three were able to lap at pace the rest could not match in the 1m48s.

But the difference was that Verstappen appeared to be much happier on the hards than he had been on the mediums and he was able to stick closer to Bottas, as Hamilton consistently edged further away in first.

Verstappen was able to track Bottas at 1.4s adrift for several laps until both Mercedes turned the screw approaching the end of the race's second third and Bottas ran clear.

Mercedes told Bottas to give it "everything you've got" as he and Hamilton set a series of times in the 1m47s, but they did not come into the pits.

This meant they ran to the flag on a single stop and while it initially looked like a calm run to the flag for the leaders, both had minor problems before the finish.

First Bottas reported a numbness in his left leg from the braking force, and then Hamilton became concerned about the state of his right-front tyre - with both Mercedes at separate points in the closing laps locking up at the Bus Stop and cutting the second part of the chicane.

But these issues came to nothing and Hamilton continued to pull away, finishing with a winning margin of 8.4s at the flag, with Verstappen - who struggled with a vibration on his hards as the second stint wore on - seven seconds behind Bottas in third. 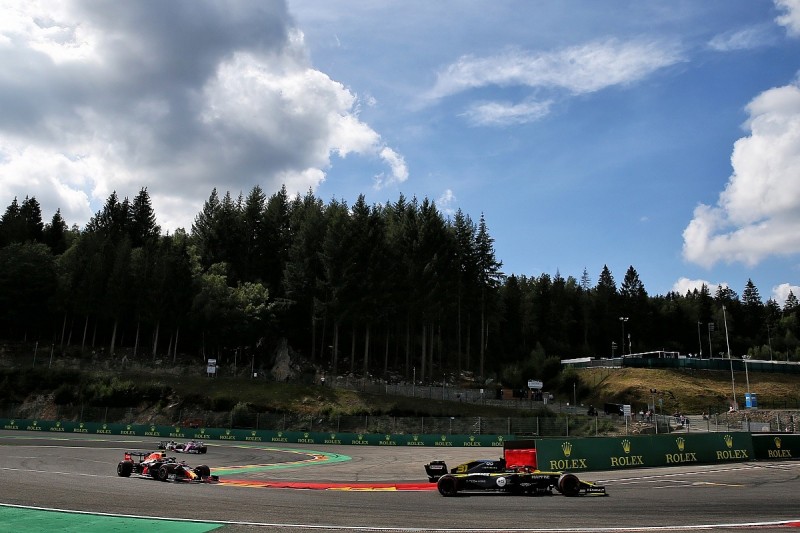 Ricciardo took fourth for Renault - making a key pass on Pierre Gasly, who did not stop during the safety car to leap up the order, a short while after the restart - setting a string of rapid laps at the end and clinching the fastest lap on the final tour.

His team-mate Esteban Ocon stole fifth from Alex Albon on the final lap with a blast of DRS on the outside coming into Les Combes, as the Red Bull driver tried to make a soft-medium strategy work.

Albon so nearly held on to fifth, but did stay ahead of Lando Norris's McLaren to finish sixth.

Gasly put in a series of passes - mainly with DRS on the Kemmel Straight - as he rose from the rear of the field following his green flag stop after he had taken the restart in fourth.

He battled back by Sergio Perez, who also did not stop under the safety car and had to make a long first stint work on the unfancied softs as a result, eventually taking eighth.

Lance Stroll was ninth ahead of Perez, with Daniil Kvyat 11th in the second AlphaTauri.

The Ferrari drivers finished 13th and 14th - beaten by Kimi Raikkonen who had started in P16 - as both were exposed by the SF1000's lack of straight line speed.

Vettel finished ahead after another curious set of radio exchanges with his engineer regarding strategy, while Leclerc made two stops - with the second featuring a precautionary top up of pneumatic pressure - on his way to 14th after he had gained several places at the start before being overhauled.

Carlos Sainz Jr did not start after his McLaren developed a power unit problem that led to a broken exhaust on the laps to the grid.