McLaren has brought a series of new upgrades to address the MCL35's "weaknesses", testing a new front wing, floor and rear wing arrangement for the Formula 1 British Grand Prix.

Team principal Andreas Seidl explained that the team had "specific issues that we want addressed" with the new package brought to Silverstone, particularly with its performance in lower-speed sections.

While low-speed performance is less of a consideration at Silverstone, which contains a plethora of high-speed areas, the team has also tried to boost the overall downforce output of the car to maximise the speed at which it can attack the high-speed corners.

"Overall, if you compare our car with a Mercedes car, there's weaknesses everywhere," said Seidl.

"But of course, we have some specific topics that we want addressed with this aero update that we bring here.

"As we have seen also in Hungary compared to our competitors I still think we have some weaknesses, especially in low speed, but of course as always we simply try to add overall downforce as well to the car.

"And that's what we try to address for here with the updates we bring, which is mainly around the front wing and the floor area."

The team was spotted with an array of aero probes at the front end to understand the new pressure map behind the front tyres, and an extensive slathering of flow-vis paint was also sprayed onto Norris' car to help the team check that it correlates with the airflow characteristics seen in the factory. 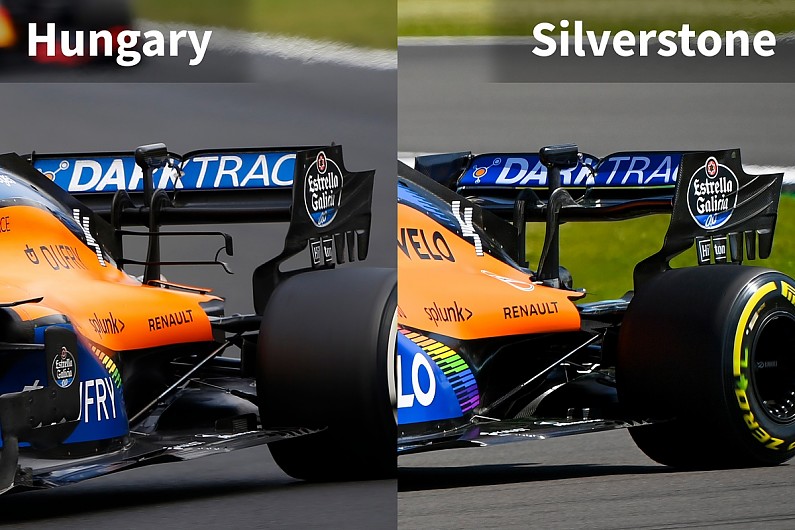 For Silverstone, McLaren has bolstered its package with a new rear wing (above) to trim out some of the drag, having run in Hungary with a high-downforce specification.

The wing mainplane bends upwards towards the point at which it attaches to the endplate, a conventional approach to taking drag out of the wing.

The outboard section of a wing generally produces the least amount of downforce compared to the centre, and so trimming them is a oft-used compromise in taking drag out of the wing without stripping it of too much downforce.

In addition, the top wing plane reverts to a specification similar to that seen in Austria, where the top corners are trimmed back - once more relieving the wing of a little drag and changing the way vortices shed from the top of the endplates.

McLaren has also dropped the T-wing it used in Hungary, presumably providing surplus downforce, along with the winglets at the rear of the bodywork.