In the second instalment of this new three-part series delving into the best motorsport books to have ever been published, IAN TITCHMARSH gives his verdict on those dealing with racing cars and the technical wizards responsible for them

More sumptuous books have been published about racing cars than any other aspect of motorsport, which makes choosing the top 10 an extremely difficult task.

Should an average book about an iconic car take precedence over a book with high production values about less exotic machinery? The quality of the writing has also been an important factor.

The role of an individual designer may no longer be as central as it once was, but there are certain people whose impact at the highest level of the sport has been ground-breaking and the story of whose cars deserves to be told. The list reflects this, and ranges from Vittorio Jano in the 1930s to Adrian Newey at the top of the tree today. 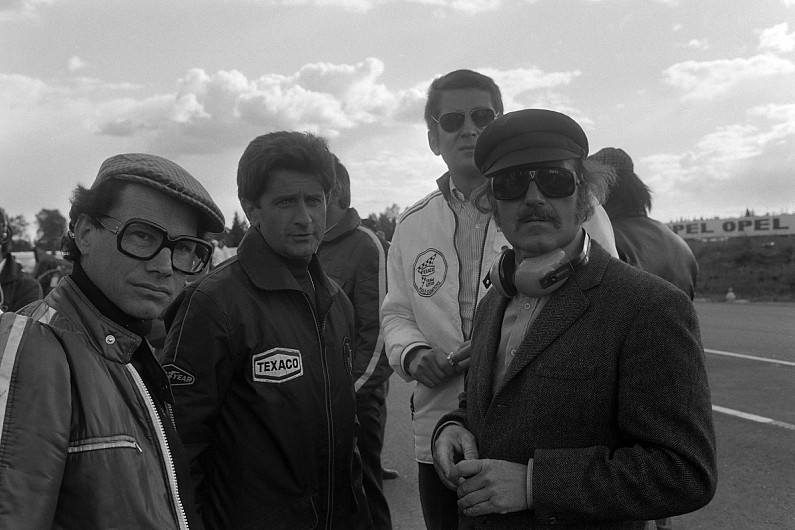 Colin Chapman, The Man and his Cars - Gerard 'Jabby' Crombac

If the Cooper and HWM teams, in their differing ways, blazed the path for British cars and drivers in international competition in the decade following the Second World War, Colin Chapman's arrival on the scene with his Lotus cars moved the science of motor racing to a significantly higher level. As first HWM and then Cooper faded away, the ever-innovative Chapman ensured that Team Lotus remained at the forefront of Formula 1 technology until his untimely death in 1982.

Author Gerard 'Jabby' Crombac (above left), as one of the most highly regarded members of the F1 press corps for many years, saw it all unfold. As a close friend of Chapman, having bought his first Lotus in 1953, he was the ideal person to write this biography. Many books of varying merit have been published about Team Lotus but this is the best. 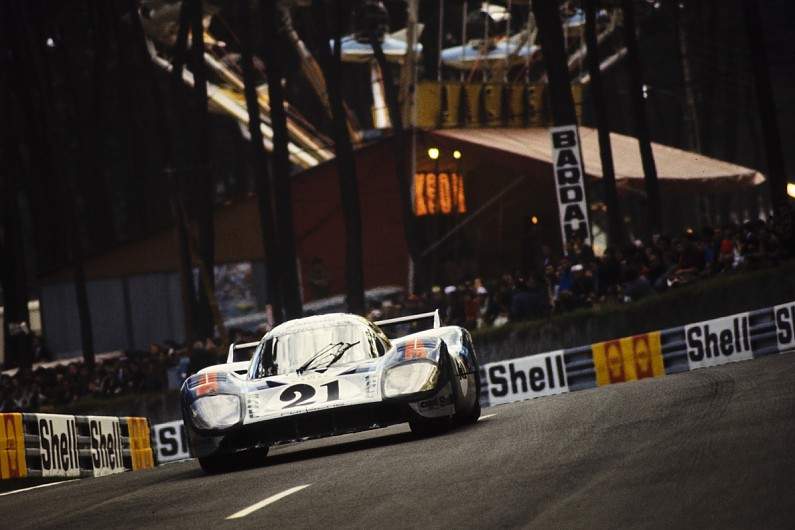 The Porsche 917 will surely forever be one of the most legendary and charismatic cars in the history of motor racing. There are several books devoted to the car which, in 1970, brought Porsche the first of its record 19 overall victories at Le Mans. But this lavish work is arguably the best by some margin.

The authors are acknowledged experts on Porsche in racing, having produced a number of books on the great German sportscar manufacturer. Publisher McKlein has access to a treasure trove of archive images with which the book is liberally laced. They have spoken with many famous Porsche names, not just the drivers but also some of the personalities behind the scenes.

There is a comprehensive and detailed table of every race in which a 917 variant competed from March 1969 to September 1981, including Can-Am. The words are in German and English throughout. If you can only afford one book about the Porsche 917, this is the one to go for. 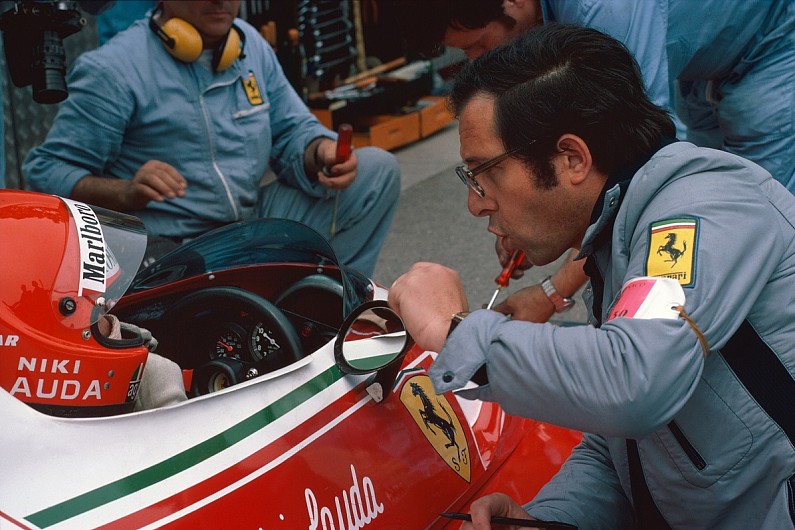 On 30 October 1961, Enzo Ferrari called Mauro Forghieri to tell him that, with immediate effect, he would be responsible for all of the manufacturer's motorsport activity and testing. Forghieri was 26 years old and had been with the Scuderia for less than two years. Not until 1987, as drivers, engineers, designers and managers came and went, did he leave and move to Lamborghini.

Almost certainly, more books have been written on the subject of Ferrari than any other aspect of motorsport; some are very good, others are poor and peddle myths. The beauty of this book is that it is written by one of the most important people in the racing team over many years. Not only that, but Forghieri was responsible for designing whole cars, that is not just the chassis or the engine or the gearbox, but everything. He saw things from a different perspective.

His frank observations on the personalities and politics involved makes for fascinating reading. The large page size ensures excellent reproduction of the many images and the English translation is so good that it is barely noticeable that it was originally written in Italian. 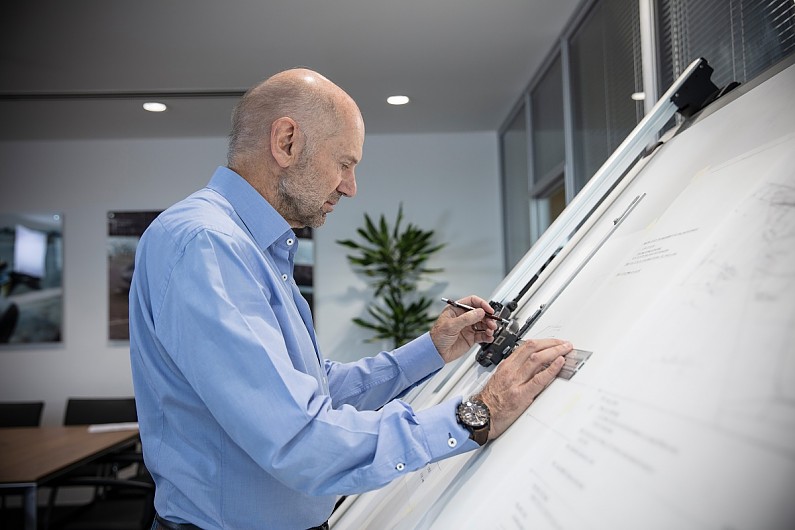 How to Build a Car - Adrian Newey

Adrian Newey has been at the heart of Formula 1 for over 35 years. He has been responsible for some of the most innovative and successful grand prix cars from Williams (FW14, FW16 and FW18), McLaren (MP4/13 and MP4/20) and Red Bull (RB5, RB6 and RB8). Before Williams there was the March 881 and before that the March 83G prototype and March 86C Indycar.

Each of these machines is given its own 'How to Build' chapter around which Newey weaves his life story, illustrated by various technical drawings and sketches rather than photographs. The words are so absorbing that you don't really miss the pictures.

Newey has a wry sense of humour which permeates the book as he recounts his take on all the major, and some minor, happenings in F1 in recent times. From a true insider, this winner of the 2018 Royal Automobile Club Motoring Book of the Year Award is essential reading, and re-reading, by anyone with an interest in F1. 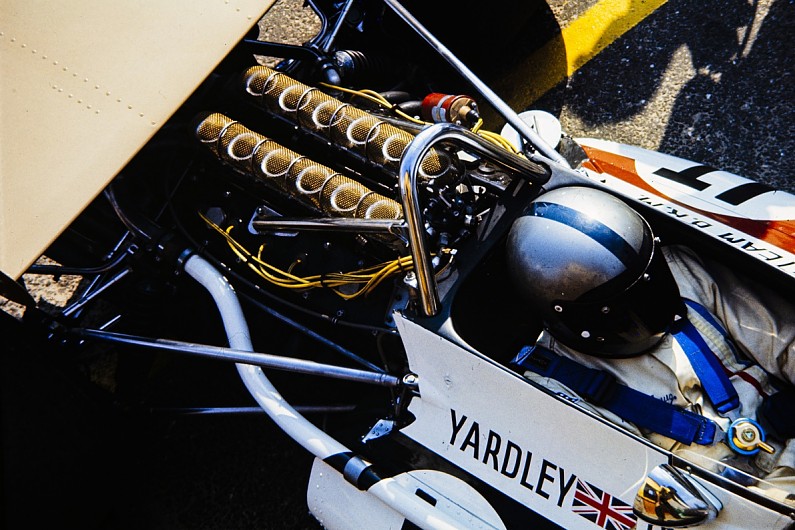 Doug Nye's aim in embarking on his BRM project was to provide the most detailed and comprehensive history of a grand prix team ever likely to be published. In this he has surely succeeded.

Across three volumes and over 1100 pages, with innumerable quotations from the people who worked for BRM, it tells all you could possibly want to know about the trials and tribulations and ultimately, thanks to chief engineer Tony Rudd and lead driver Graham Hill and the dedicated workforce at Bourne, world championship success in 1962. A BRM last won a world championship Formula 1 race in 1972, courtesy of Jean-Pierre Beltoise in the pouring rain at Monaco.

The last appearance of a BRM at world championship level was in 1977, when Teddy Pilette vainly tried to qualify the uncompetitive Stanley BRM P207 for the Italian Grand Prix. That means the letters BRM have little or no significance for F1 fans of the 21st century. But they are an important part of British motor racing history, and Nye's epic masterwork tells a remarkable story. 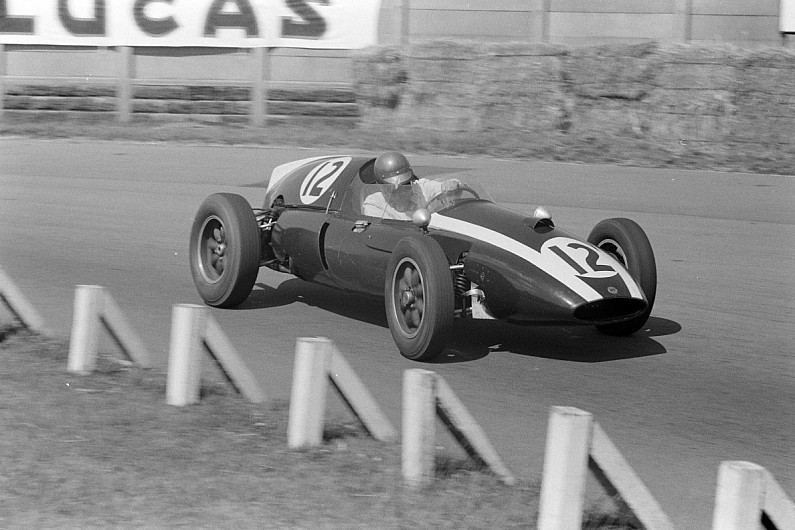 Father and son Charles and John Cooper might be regarded as the founders of the British motor racing industry. From 500cc, motorcycle-engine single-seaters in 1946, to Formula 1 drivers' and constructors' world champions with Jack Brabham in 1959 and 1960, the Coopers were truly world beaters.

Pre-eminent historian Doug Nye is the ideal person to chronicle the rise and fall of Cooper in great detail but always informatively and entertainingly. The first edition was published in 1983 and won the Montagu Trophy for recording the history of motoring, and the Pierre Dreyfus Award for outstanding automotive journalism.

The second edition, published 20 years later, benefits from the considerable amount of additional information which Nye acquired and is the one to go for. This is motor racing history at its very best. 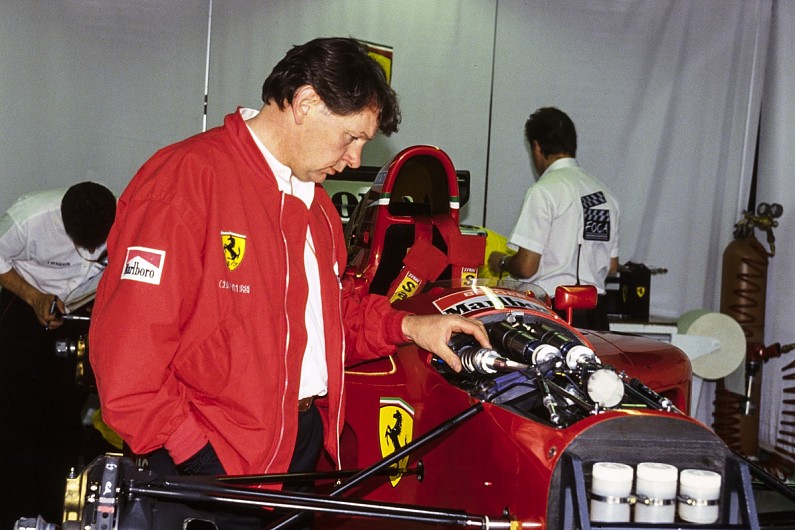 The Perfect Car: The Biography of John Barnard - Nick Skeens

To quote the opening words of this nearly 600-page epic: "This book is about a genius, a poet of engineering, a man who produced some of the most brilliant and beautiful race cars of the modern era while battling enormous odds to do so. One mission drove him throughout his professional life - his attempt to create the perfect car."

John Barnard played a major role in the design and development of the McLaren M23, with which Emerson Fittipaldi and James Hunt won world championships, before creating the Parnelli VPJ-6C and Chaparral 2K Indycars. On returning to McLaren, he pioneered the use of carbon fibre chassis in Formula 1 with the McLaren MP4/1.

Moving to Ferrari as technical director, he introduced the semi-automatic gearbox in the Ferrari 640 which brought Nigel Mansell a debut victory in Brazil in 1989. After Ferrari came Benetton, a return to Ferrari, and then a short spell with Arrows.

Despite its length, this book is difficult to put down and is surely one of the definitive accounts of F1 in the last part of the 20th century. 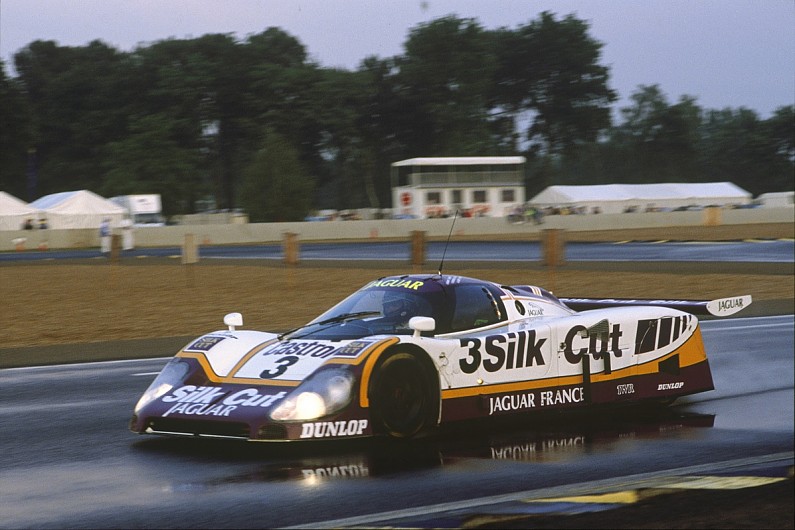 From Drawing Board to Chequered Flag - Tony Southgate

He also acted as design consultant for Ferrari's IMSA 333SP project, chief engineer at Team Lotus at the time of the Types 77 and 78 and much else besides. This must be one of the most impressive rolls of honour of any racing car designer operating at world championship level in Formula 1, Group C sportscars, Can-Am and Indycars.

Southgate's autobiography is an authentic and often amusing account of his life in the upper echelons of the sport designing some of the best-looking cars of their time. 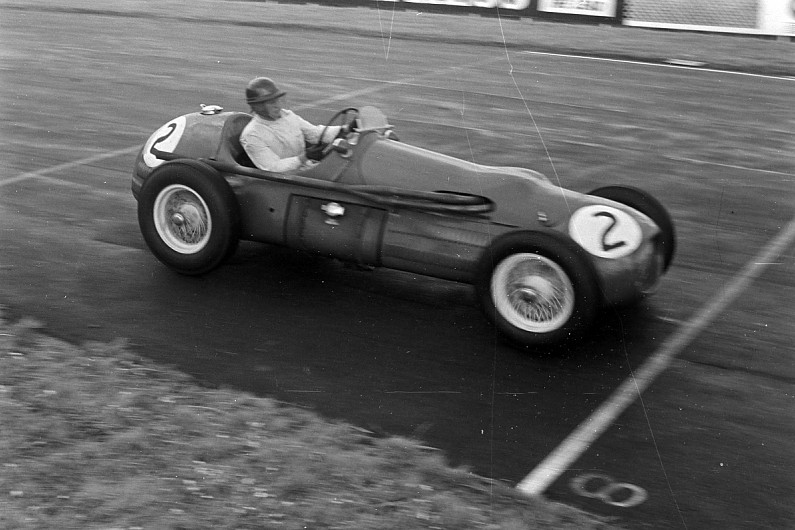 John, George and the HWM: the first racing team to fly the flag for Britain - Simon Taylor

This deeply researched book tells the stories of John Heath and George Abecassis. The two British drivers' enthusiasm for motorsport in the years of austerity following the Second World War drove them to create a series of cars with which to go racing both in the UK and around Europe, with notable success considering the shoestring budget on which they had to operate.

The cars were named HWM after John Heath's garage business. They complied with the Formula 2 regulations of the time but regularly took on the more powerful Formula 1 cars from Ferrari and Maserati among others. Existing on the start money paid by race organisers, Heath and Abecassis employed a young Stirling Moss and an even younger Peter Collins (pictured at the 1953 British Grand Prix) at the start of their international careers.

Comprising two profusely illustrated volumes, the first tells the history of the HWM team while the second provides a mass of facts about the cars, the tracks and the drivers. 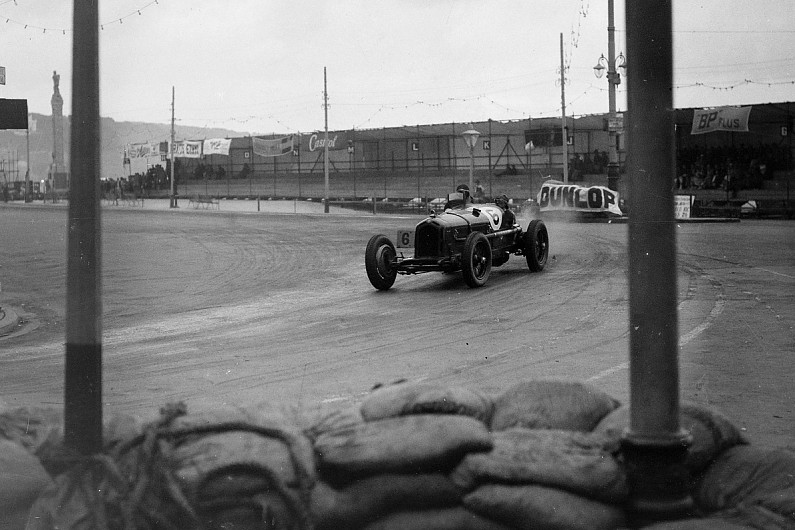 Vittorio Jano was one of the greatest racing car designers of the 20th century. His last great car was the Lancia D50 which, as the Lancia-Ferrari, brought Juan Manuel Fangio his fourth drivers' world title in 1956.

Jano's masterpiece was the Alfa Romeo 8C, the Monza and P3 monoposto versions of which dominated grand prix and sportscar racing in the 1930s until the German Mercedes-Benz and Auto Unions took over in 1934.

This large, deeply researched book, written by eminent motoring writer Mick Walsh and published by Porter Press in its Great Cars series, traces the history of one Monza from its earliest days with Scuderia Ferrari to the present day and in the process tells the story of motor racing at the highest level as it was, both internationally and in the British Isles, in the 1930s, '40s and '50s.

Profusely illustrated, with images reproduced to a higher standard than they would have been originally, this high-quality book exudes the ambience of those days. 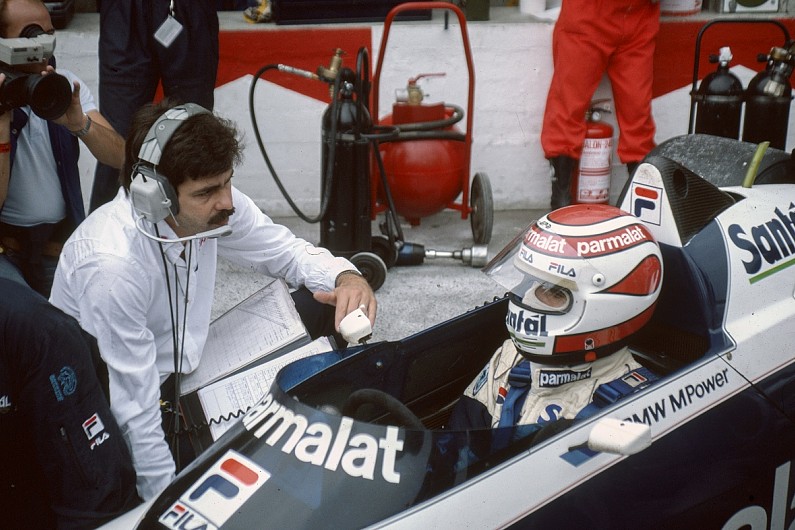 A monumental work which covers not just Gordon Murray's racing cars but his many road car projects. At £300 for the standard version, you need deep pockets for this lavish production.

Four decade-by-decade volumes with informative words and pictures covering every car and driver which competed in Formula 1 from 1950 to 1989.