Valtteri Bottas won a dramatic Formula 1 2020 season opener in Austria from Charles Leclerc, after Lewis Hamilton's penalty for contact with Alex Albon dropped him from second to fourth.

Bottas crossed the line as the winner of an attritional race 0.6-seconds clear of his team-mate, but Hamilton was immediately demoted, which boosted McLaren's Lando Norris to first F1 career podium in third.

Hamilton's incident with Albon happened after the end of the race's third safety car period and after Mercedes had had to intervene with its drivers due to critical reliability warnings.

At the start, Bottas easily held the lead off the line and blasted to a two-second lead at the end of the opening tour, as Red Bull's Max Verstappen - the only top-10 starter on the medium tyres - soaked up pressure from Norris after several cars including Norris, Hamilton and Leclerc shot across the runoff at the exit of Turn 1.

Bottas set about extending his lead as the race settled down, warned by his team to look after his car on the third lap, as Verstappen tracked him.

But any hope Red Bull had of its alternative strategy helping Verstappen to a third win in succession at the team's home track was crushed when the Dutchman suddenly lost power approaching Turn 1 on lap 11 of 71. He toured back to the pits attempting to reset the issue - a suspected electrical problem - but was forced to retire.

That left Hamilton chasing Bottas, as the world champion had earlier demoted Norris, and then Albon using DRS to blast by on the run to the Turn 4 on lap nine, and he quickly began eating into the leader's advantage. 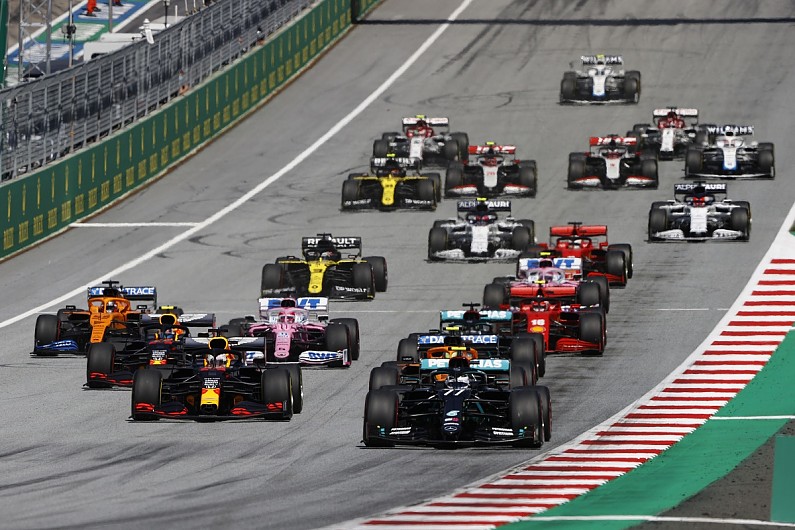 As the first stint wore on, Hamilton had lowered the gap to Bottas, but the soft-tyre run was suddenly ended when the safety car was called out after Kevin Magnussen spun off with an apparent brake issue as he was being passed by Esteban Ocon into Turn 3.

Mercedes managed to turn its two cars around - both going onto the hard tyres - without losing any time for either one, and when the race resumed Bottas again streaked clear.

Hamilton, however, was soon putting Bottas under severe pressure and he called the team to check he would be allowed to choose his own engine mode, as Mercedes soon planned to turn down the power units on both cars.

But as the leaders ran ever closer together, Mercedes moved to warn them about a potential gearbox sensor issue that threatened the continued participation of both cars. The race engineers of both Bottas and Hamilton warned their charges to stay off the kerbs before Mercedes' chief strategist James Vowles intervened to tell them the issue was "critical".

As the leaders adapted their driving styles, Hamilton began to drop back from Bottas when the race was suddenly suspended again as George Russell retired from P13 with a loss of fuel pressure in his Williams.

Both Mercedes stayed out on their hard tyres, while Albon pitted from third for a set of softs, rejoining in fourth.

Almost immediately after the race restarted, it was suspended again as Kimi Raikkonen, who had just stopped for fresh softs, lost his right front wheel running through the penultimate corner. 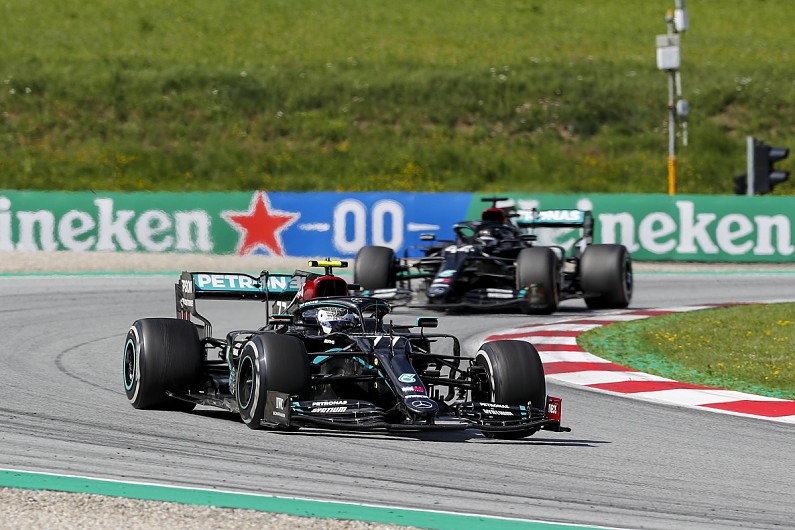 Just before the safety car returned, Albon had managed to get ahead of Racing Point's Sergio Perez on the exit of Turn 3 after the Mexican locked up and ran deep.

When the safety car peeled off for the final time, Bottas again shot clear and Albon - who had given the position back to Perez, only to resume third place while the race was still neutralised - attacked Hamilton around the outside of Turn 4. The Red Bull seemed to be ahead on the outside line but contact between Hamilton's left-front and Albon's right-rear sent Albon spinning off in the gravel - echoing the contact between the pair at last year's Brazilian GP.

As Bottas raced to the flag in what was an 11 lap final sprint, Hamilton was given a five-second time addition. That meant Leclerc, who had been driving a low-key race before the safety cars turned the action around, finished second as he had stopped for fresh mediums during the Russell safety car.

He demoted Perez from third on the road with a late move into Turn 3 five laps to run and was close enough to Hamilton to move up to second after the flag.

Norris claimed the final podium spot after surviving a late scrap with his team-mate Carlos Sainz and then bumping past Perez, who had tried to make a long run of mediums work earlier in the race, at Turn 3. But Norris needed to close the gap to Hamilton rapidly and he set the race's fastest lap on the last tour to take third by 0.1s once the world champion's penalty was applied.

Sainz finished fifth with Perez sixth after being given his own five-second penalty for speeding in the pitlane. 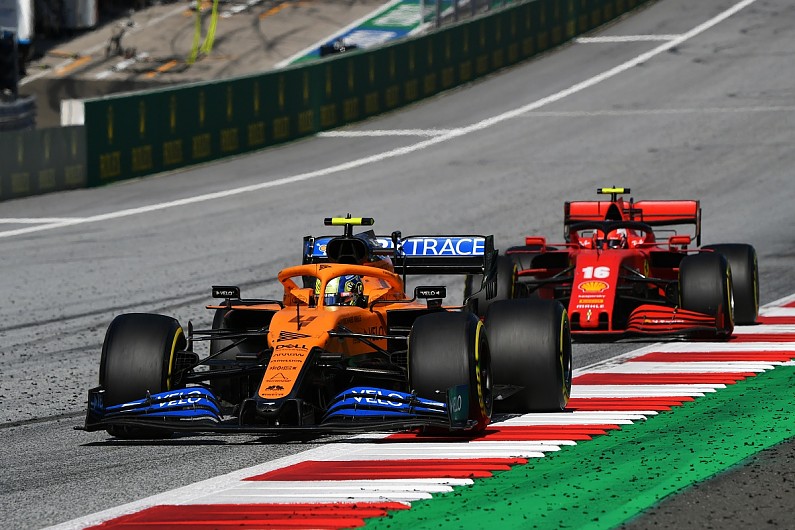 Pierre Gasly took seventh ahead of the returning Ocon for Renault, with Antonio Giovinazzi ninth for Alfa Romeo.

Sebastian Vettel took 10th despite a spin when he misjudged his braking while running behind Sainz's McLaren going into Turn 3 shortly before half-distance.

Nicholas Latifi finished his F1 debut as the final runner on track in P11, with Albon a late retirement alongside a host of other non-finishers who suffered various mechanical problems - except Daniil Kvyat who retired late on with a blown left-rear tyre as he ran into Turn 1 with two laps to go.