As Autosport launches the latest episode in its Race of My Life podcast series, we take a look back at 1992 Formula 1 world champion Nigel Mansell's choice as the race of his life - the 1986 British Grand Prix

As one of Great Britain's most popular F1 world champions, it perhaps isn't too surprising Nigel Mansell picked a home win from his 31 grand prix victories.

But in a race that is remembered for both all-time highs and lows, Mansell's own achievement at Brands Hatch in the 1986 British Grand Prix stands out because he almost wasn't able to take part.

After suffering a broken driveshaft in the initial start, a nasty accident for Jacques Laffite which would cut short his F1 career triggered a red flag, and Mansell was permitted to take to the restart in the spare Williams car.

But to make the restart Mansell would need to race with the car set up for team-mate Nelson Piquet who had taken pole position ahead of the Brit earlier in the weekend.

With the home crowd roaring him on, Mansell beat his Williams team-mate in literally equal machinery in a race which became a memorable final F1 grand prix at Brands Hatch. 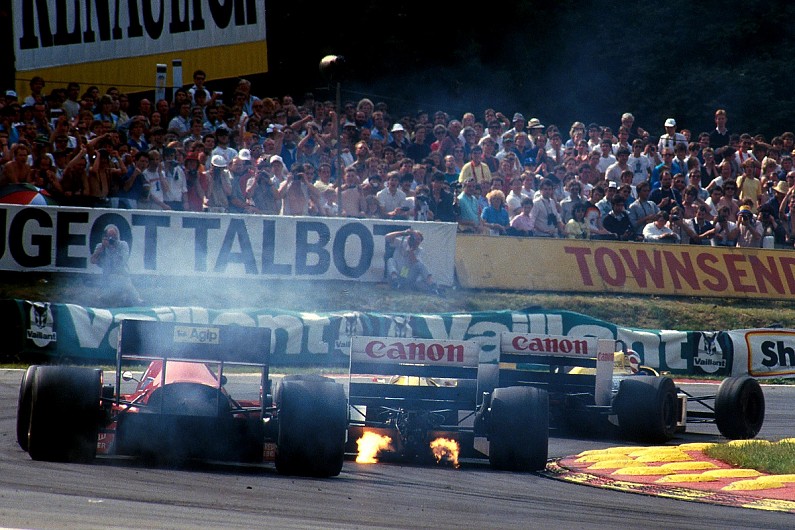 "The most satisfying race for me was the British Grand Prix in 1986 at Brands Hatch, when my racecar broke a driveshaft at the start. I had to climb into the T-car, which was set up for [team-mate] Nelson [Piquet], and I ended up winning in his car.

"Racing at Brands was awesome because we still had 1000bhp to play with. There was no peace - you were on it all the time.

"When the driveshaft snapped, I thought, 'that's the race over'. And then there was Jacques Laffite's massive accident" Nigel Mansell

"Coming across the startline into Paddock doing 196mph, then down the dip with negative G followed by positive G as you went up Hailwood Hill. You had to have the car pointing in the right direction at the right time.

"There were points on the track that you had to get technically right. If you didn't, you were slow and it was dangerous.

"When the driveshaft snapped, I thought, 'that's the race over'. And then there was Jacques Laffite's massive accident. Fortunately for me, the organisers decided to make it a completely new race, which let Williams swap cars.

"Looking back now, that was a real challenge. I had to get used to a car that was set up differently and not to my liking. The turn-in wasn't how I had mine set up and the balance wasn't the same. And the spare had been difficult all weekend, but that's what I had - we had no time to change anything, not even the pedals. 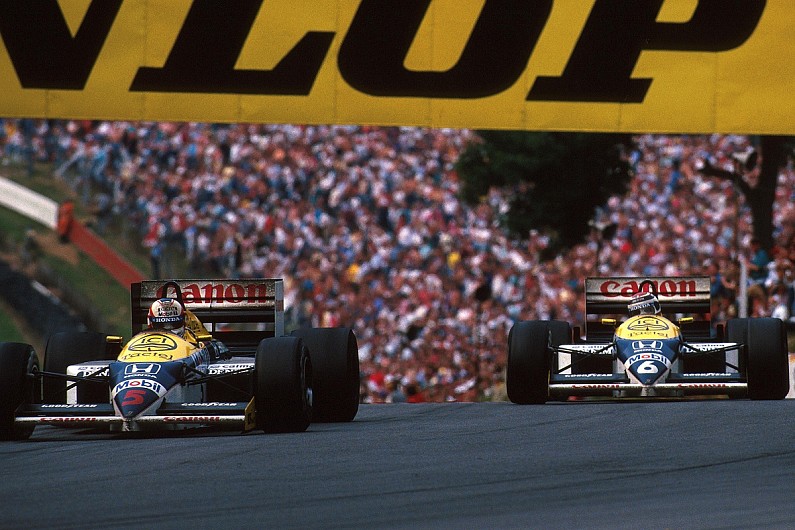 "I gave it a lap or two to get used to it, and Gerhard Berger got ahead of me. But I passed him on the third lap and then just got stuck in chasing after Nelson.

"The amazing thing is that the race was won and lost on just one missed gearchange. Nelson missed a gear coming out of Surtees and it gave me half a car's length up the side - all I needed!

"It was a great technical race. There were a lot of cars to pass so you needed to stay focused.

"It was very satisfying jumping into someone else's car, that's not set up for you, and beating them.

"The crowd was phenomenal. They always were in Britain. The thing is you build momentum. Winning the '85 European GP at Brands, then the '86 British and at Silverstone '87 - doing the triple at home was very special."