Lewis Hamilton says that the Mercedes Formula 1 team learned from its Brazilian GP mistakes - and he does not regret "experimenting" with the strategy call that cost him a podium.

When the safety car came out in the closing laps at Interlagos the team gave Hamilton the option to pit for fresh tyres but it miscalculated how many places he would lose by pitting, and also how many laps of racing would be left after the track went green.

After the race, Mercedes technical director James Allison said the decision to allow Hamilton to make the call himself without all the information was "dumb" and a "rookie error."

Hamilton says that he has talked through the race with his team, and that lessons have been learned.

"It's not a major drama for us," he said when asked by Autosport.

"I don't think it would have happened if we were fighting for the championship.

"We were experimenting, trying to be a little bit more risky. It didn't pay off. But it's good for us to go through those experiences.

"We probably learned more from that weekend than we did from the couple of weekends before when things generally went relatively smooth sailing. We just talk openly about it.

"For me personally I took the decision in the end to come in.

"I was given the option, but also I was given slightly the wrong information - where I'd come out. There's other things that followed, like the safety car stayed out longer, those kinds of things.

"Naturally hindsight is always great thing, so you would go back and you'd probably change it.

"But I don't regret the decision we made, because we've learned quite a bit that we can implement into this weekend, and into next year." 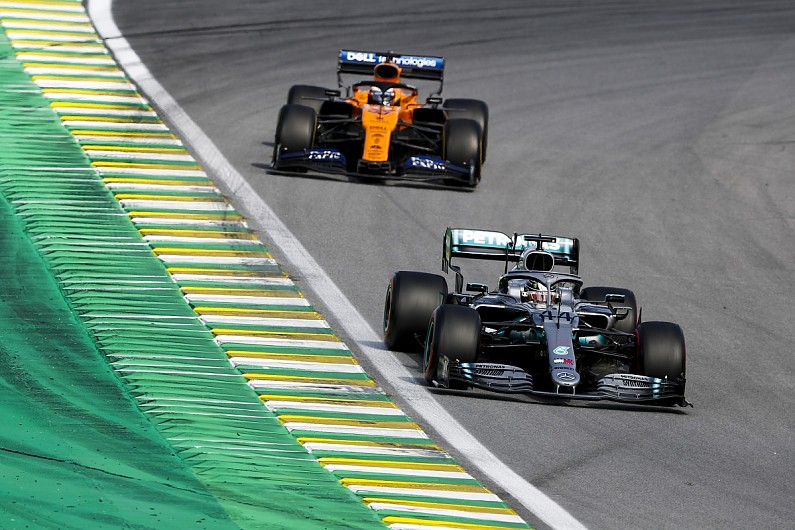 Hamilton is determined to look to the positives of Brazil and to bounce back in Abu Dhabi this weekend to to end the season on a high.

"Brazil definitely wasn't a great one. But I think it's really important to acknowledge the good parts of the weekends, rather than always just focus on the negatives.

"Naturally the negative of not finishing in the position that I should have easily and the failures and mistakes, it's good to acknowledge those, but it's good to take away from it the positives.

"And there were plenty of positives to take from the weekend.

"I don't want another weekend like that so I'll put things right this weekend and we'll just continue to go full steam ahead."

Hamilton's team-mate Valtteri Bottas is resigned to start at the back of the grid in Abu Dhabi after a failure in Brazil meant that he has had to take new power unit elements.

"Obviously I'm taking a new power unit of the latest spec, and that means I'm starting from the back of the grid," said the Finn.

"Knowing that already, we need to really focus for the race performance, race pace, whatever we do with the car.

"Also thinking ahead about the strategy, if there's anything we can do to aid my comeback from the back.

"The good thing is that everything was already settled in the championship before Brazil.

"Obviously if I would still have been in the title fight that failure and the start for this weekend would have been more painful.

"Everything's settled, I'll take it. It is what it is.

"I know the approach for Sunday and we need to make the most out of it. I'm sure we can still do something good from there.

"I accept it and take it as a challenge - at least we should get some good overtaking practice."