Valtteri Bottas says he 'blames' himself for being so far behind Lewis Hamilton and knows he now needs to be "very lucky" to fight for the 2019 Formula 1 title.

His first opportunity to seal a sixth world championship will come at the Mexican Grand Prix in a fortnight, if he extends his advantage by five points across this weekend's Suzuka race and Mexico City.

Asked by Autosport how he was looking at the drivers' championship, Bottas said: "I haven't thought in a way that 'that's it', even though I know the facts and I would need to be very lucky as well to still be able to fight for the title.

"It's not done yet. But I can for sure blame myself as well for being that far [behind] in the points, in this situation, because Lewis has been better so far, more consistently.

"That's how it is. Now we're in this situation, I just focus on each weekend and the closer we get to the end, we'll find out what happens with the points and where I finish.

"At least it's going better than last year, at this point."

Bottas has two victories this year but has not won since the the Azerbaijan Grand Prix in April, after which he led the championship by one point.

Hamilton has won seven races since then, taking his total to nine for the season. 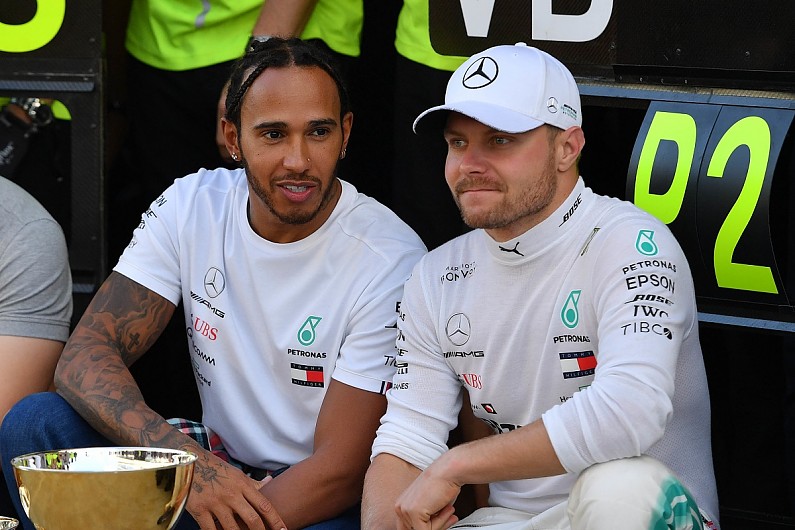 But Bottas believes his performance relative to Hamilton has been "pretty similar" all year.

"It's been pretty consistent but a step from last year, which is always what I like to see," he said.

"But obviously I want to get closer and really working on those details to make it happen."

Finishing runner-up would be Bottas's best result in F1 but he needs to win another race to match his tally of three victories from 2017, his first season with Mercedes.

He is on course to post his best points tally though, has already scored four more podiums than last season and matched his best-ever pole tally in a campaign with four.

"Qualifying performance has been good but not consistent enough," he said.

"I haven't been able to have clean Q3 sessions as often as I would like to, so that has given me a slight disadvantage in the starting positions a few times.

"That is a thing we need to work on, minimise the mistakes and maximise the opportunity, whether it's about traffic or whatever.

"The big thing is race pace and efficiency on the tyres, driving style in certain corners, certain circumstances.

"I've found a good way of working with the engineers now and it's really improving and we can see my gap to Lewis in the performance is shrinking.

"You'd always like to do that quicker but I need that consistency and to get those few details still right to do it, but I believe I can in the future."