Sebastian Vettel does not understand his struggle to match Ferrari Formula 1 team-mate Charles Leclerc's Belgian Grand Prix pace, and admits he was "playing a road block" with Lewis Hamilton.

Leclerc comfortably outpaced his four-time world champion team-mate in Spa qualifying, taking pole by 0.748 seconds in an all-Ferrari front row, and outran him again in the race - pulling out a 3.4s lead in the first stint.

Vettel had to make an early stop to cover off Hamilton, and that strategy temporarily launched him into the lead.

But after later letting Leclerc back into first place on team orders he worked hard to keep Hamilton behind as long as possible.

That allowed Leclerc to extend his advantage, and he just managed to stay clear of Hamilton at the flag to score his first grand prix victory. Vettel had to make a second pitstop that left him a distant fourth.

"I didn't have the pace, I didn't feel comfortable with the car," said Vettel.

"I was going through the tyres way too quick.

"I was struggling to feel the grip, to stay on top of the tyres, I was sliding too much. It was quite a tough race for me.

"And obviously from that point where we came in quite early it was clear that we won't be there until the end. I guess I was sliding more [than Leclerc] but I don't know why.

"[The race approach] was about the team. After the first couple of laps I felt I was not able to look after the tyres the way I would like, and from that point onwards I was just there to try and help the team, which I did."

Vettel said he did his best to delay Hamilton in order to help Leclerc.

"I was struggling in the corners, so that allowed him to get close," he explained.

"I couldn't hold him off for a very long time. I tried to obviously make him lose time in order to give Charles a cushion, and in the end it was just enough, so it did the job.

"I couldn't stay in range to look after myself, and I was sort of playing a road block to make sure that Charles was gaining some time."

Ferrari team boss Mattia Binotto had no explanation for why Vettel struggled to match the pace of his team-mate. 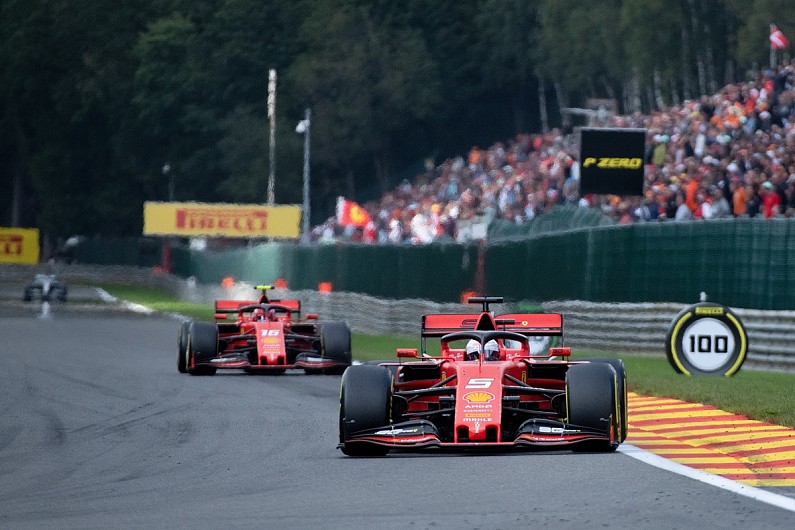 Asked about the "big gap" between his two drivers, Binotto downplayed the scale of the discrepancy but conceded that the team did not understand it immediately after the race..

"But certainly Sebastian suffered more with degradation this weekend, on Friday and during the race.

"It's certainly down to the set-up as well. Seb is normally very good at managing the tyres. Especially in the very first laps, somehow to use the tyres later in the stint.

"So it's something we will take care to try to understand and analyse. And if we may learn it we will try to improve ourselves for the future.

Binotto felt Ferrari had performed better relative to Mercedes on the soft tyre at Spa, but that the advantage had gone the other way on the medium - which helped Hamilton to put pressure on Leclerc at the end.

"Why is that the case? It's very difficult to understand the tyres this season," said Binotto.

"Probably if you ask the same question to Mercedes they will struggle to answer why they were not so strong on the softs and stronger on the medium.

"Hearing the radio of Hamilton somehow they were surprised by the pace they got on the medium.

"The difficulties of understanding the tyres, it's long-term we have been discussing it."