Max Verstappen believes Lewis Hamilton's late charge to victory in the Hungarian Grand Prix shows "how much margin" the Mercedes team has over the rest of the Formula 1 grid.

Verstappen beat the two Mercedes cars to pole position at the Hungaroring, but was under pressure from Hamilton for the whole race.

He managed to resist Hamilton's attacks in the middle phase of the race while they were running on the same tyre, but he was powerless to prevent the Briton from going through once Hamilton had pitted for a fresh set of mediums and methodically erased the gap to Verstappen before the end.

Red Bull has often excelled in race trim in 2019, but when asked whether his team had been caught out by the lack of representative running in Friday's wet practice sessions, Verstappen suggested the edge Mercedes had in Hungary was simply down to it having more performance available when it needs it.

"I think you can see how much margin they still have when they really need to push," Verstappen said in the post-race press conference.

"Today Lewis was on fire as well, but you see, once he really has to go for it, you can see that that car is still the dominant car.

"It's as simple as that. Whereas in some races it's maybe not as necessary [to run at full capacity].

"Of course they had their issues in Austria with overheating so [Mercedes couldn't] push. In Hockenheim it was tricky conditions as well, so [you] can't really drive to the limit of the car.

"But here today I think he had to go for it, flatout, because I was also pushing flatout, and you can see what they are capable of as a team." 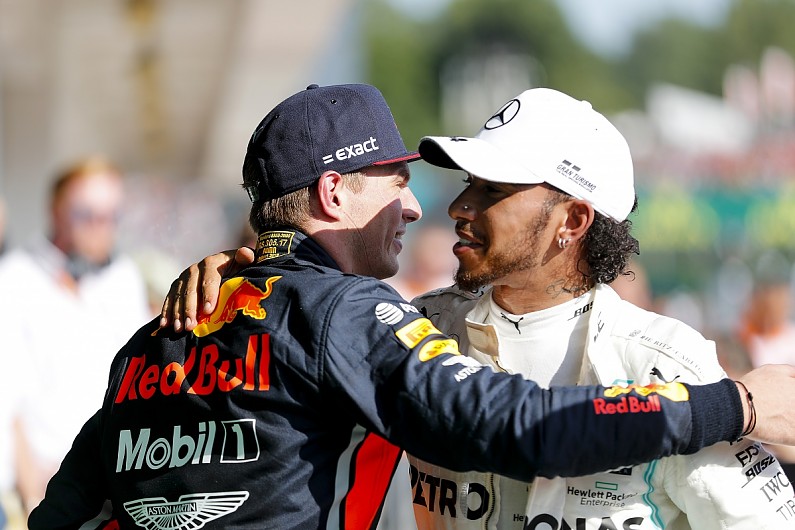 While he led most of the race, Verstappen said being passed by Hamilton late-on was not a big blow, as he was aware Red Bull was "just not fast enough".

"So I ran out of tyres, and of course you can see it coming, so for me it was not a big disappointment once he passed me, because it's just a normal thing to happen.

"But we have to be realistic - he was just clearly faster today. I was always struggling a little bit more for grip than him, he could keep the pressure on, and of course when you are in second you can gamble to do a two-stop.

"For me it was all about always trying to cover him to stay ahead, but with a two-stop, worst-case scenario you stay second, and best-case you overtake me."