The Haas Formula 1 team has taken the unusual step of returning Romain Grosjean's car to its Melbourne aerodynamic specification for the British Grand Prix at Silverstone.

The move is part of the team's attempt to get to the bottom of its recent struggles, with Grosjean having felt uncomfortable since a major upgrade package was introduced at the fifth race in Spain.

Grosjean will return to the original spec for the whole weekend, while team mate Kevin Magnussen will keep the latest iteration, allowing the team to get three days of back-to-back data.

Among the differences between the two cars are the floor, nose, front wing, rear endplates and turning vanes.

"When we introduced the update I wasn't fully convinced about it in Barcelona," said Grosjean.

"But the data suggested it was good, so we put it on, and we kept going. But for a few races I really felt better with the initial package so I wanted to come back in terms of feeling.

"And obviously the last two races in terms of performance have proven to us that we need to understand a bit more what's happening. Early in the year, we had very good qualifying, and then the race pace was not as good.

"But I think we understood what happened in China and also in Bahrain, and what we could've done better. So that was positive - I think our pace there had more potential, while recently the race pace does not have much potential.

"I think I really extracted the best of it out of the last three races, and Kevin has got the upper hand in qualifying but in the race completely the opposite, I almost lapped him twice - but it's [for] P16." 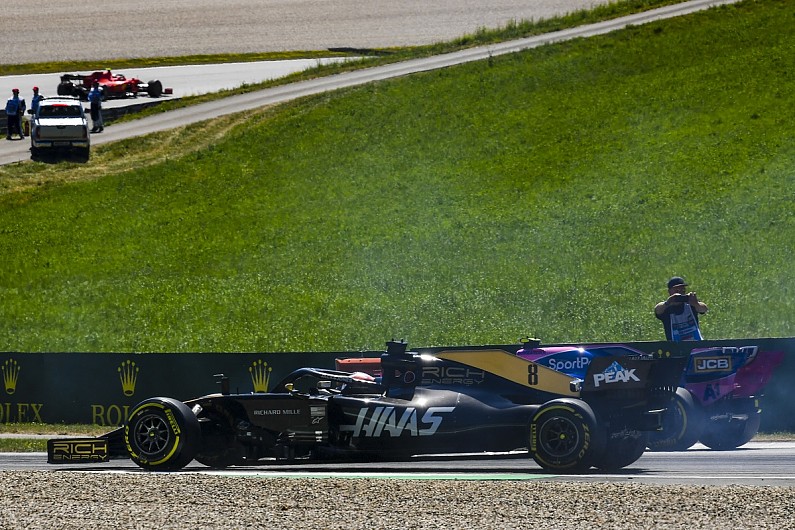 Grosjean said team boss Guenther Steiner gave the go ahead for the move back to the original spec - in the 10th round of the season - to create an opportunity for the team to work out where it might have gone wrong in recent weeks.

"Obviously it's a hard call, and it's very difficult for all the engineers involved in the development to come back. But on the other hand maybe there are things that we don't measure that my arse can feel, but the sensor doesn't see.

"So, that's really why we're coming back here, and see if with that package we've got more options to set up the car to go faster in the race.

"It was lucky they went behind the shelf in Banbury and they could find an old floor and an old everything."

Grosjean is not concerned about trying the old package at a track where it has not previously been run.

"We've got two cars running two different packages, [getting] as much information as we can in terms of sensors.

"So, if that's any correlation in the fact that we cannot go as fast as we want, that's what we want to find out.