Vettel set a 1m18.161s in the morning session on the C3 tyres - the middle compound in Pirelli's testing range - to end up 1.783 seconds quicker than his nearest rival, Racing Point driver Sergio Perez.

While he did not improve on that time in the afternoon, Vettel did extend his lap count to 169 by the end of the day, which also left him comfortably ahead in that tally.

Vettel's advantage over the field was reduced in the afternoon.

Haas's Romain Grosjean was the first driver to get within one second of the benchmark time, with a lap on the C3 tyre in the last half hour of the session helping him snatch second from Sainz.

But Sainz took the position back with an impressive 1m18.558s lap to end the day 0.397s slower than Vettel. 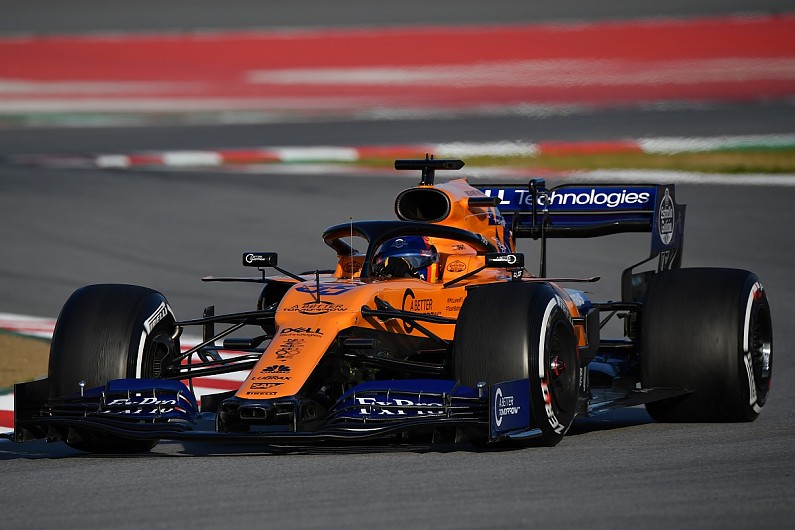 Sainz had earlier brought out the first red flag of the afternoon when he stopped at the exit of the pitlane at the beginning of the afternoon running. He blamed a loss of power for the issue, but the car appeared to run smoothly thereafter.

Grosjean had to settle for third, but Haas had a much better afternoon than the morning. Grosjean's car had ground to a halt entering the final chicane with fuel pressure issues earlier in the day.

After a slow start to the first test, the beginning of the Red Bull-Honda relationship received a boost in the afternoon as Max Verstappen took his tally up to 128 laps and set the fourth-fastest time.

Kimi Raikkonen kept Alfa Romeo in the top five, having set the fourth fastest time earlier on in the day. He ran C2 and C3 tyres and had been as high as second, but was shuffled back later in the afternoon.

Alfa Romeo was still one of six teams to complete more than 100 laps, despite Raikkonen's visit to the gravel bringing out the first red flag of the morning session.

His car then stopped with just over a minute left in the afternoon, bringing out the red flag.

Toro Rosso's Daniil Kvyat and Perez set the sixth- and seventh-fastest times respectively, but both teams would likely have wanted more running.

Kvyat needed to bolt the C4 tyre on to set his best time, while Perez only added 10 laps to the 20 he completed in the morning, with his team finishing bottom of the laps-completed order.

After taking over the Mercedes in the afternoon, reigning champion Lewis Hamilton could not wrest Valtteri Bottas's eighth place in the order by the end of the day, but he did complete more laps than his team-mate - ending the day with a tally of 81.

Behind the pair of Mercedes drivers, Renault had a disappointing day in terms of times as its drivers rounded out the order.

New arrival Daniel Ricciardo took over from Nico Hulkenberg for the afternoon, but missed out on beating Hulkenberg by 0.003s. He also completed 21 less laps than the German driver.