Formula 1 drivers have received a clarification on blocking moves after a change of FIA opinion on Kevin Magnussen's actions that led to his crash with Charles Leclerc in Japan.

Magnussen moved to the right on the start-finish straight at Suzuka just as Leclerc attempted to pass him, which resulted in contact that damaged Leclerc's Sauber and led to Magnussen's retirement.

The Haas driver escaped sanction and FIA race director Charlie Whiting later said that the stewards felt that both Magnussen and Leclerc had moved right at the same time and it was "impossible" to say Magnussen had blocked him.

But in the United States Grand Prix drivers' briefing on Friday evening, Whiting told the drivers that after reviewing the incident it had been accepted that Magnussen had moved too late.

He went on to note that drivers should be aware of the consequences of making a late move to defend if a car is approaching at a higher speed.

"Charlie told us that he agreed that Magnussen probably moved a little bit too late," Sergio Perez told Autosport.

"I think he moved just a little bit too late, given the speed differences, but it's always a bit difficult with these mirrors as well to see the difference in speed." 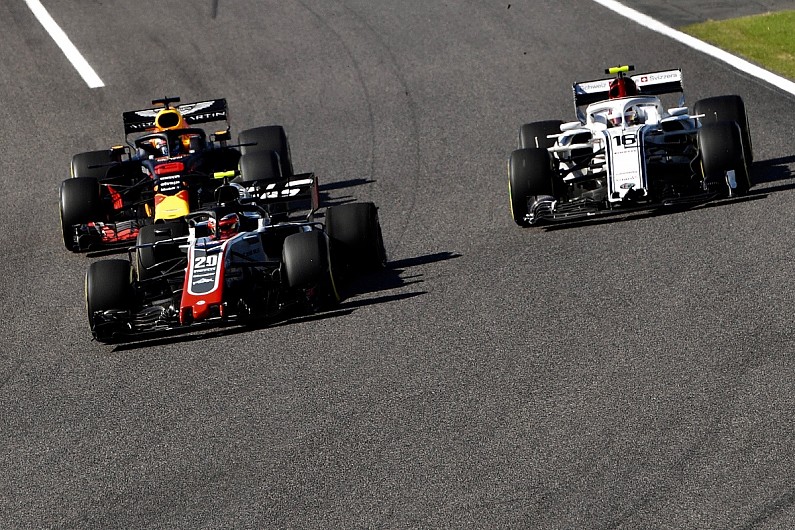 Perez's Force India team-mate Esteban Ocon said it was already "clear" to drivers what they should do, "but it's just that Kevin didn't get penalised".

He added: "They said that Kevin did move too late, definitely, and it was not very safe.

"So probably things are going to change.

"I've seen it, and I was the same in Sochi [when Magnussen and Ocon were racing each other], and we touched as well.

"Everybody agreed. Kevin agreed he was too late, he said it to Charlie."

Toro Rosso driver Brendon Hartley said the discussion in the briefing was one that had happened before.

"I think it's sometimes tricky for stewards to judge one move, two moves and also when the move is too late," he said. "I think this one was a question of timing.

"If you move so late that the other person has to back off in a straight line, I think that's not really in the spirit of racing."